Incumbent President Hamid Karzai is on track for a slim but solid victory in Afghanistan’s 2009 election if the provisional numbers published by the country’s Independent Electoral Commission are to be trusted. With just under 93 percent of polling stations accounted for, Karzai is sitting pretty with 54.3 percent of the vote, well above the majority margin he needs to avoid a run-off. In addition, the remaining 7.2 percent of polling stations largely sit within Karzai strongholds, such as Kandahar province ( Karzai pulling over 85 percent of the vote currently) and Khost provinces (83.4 percent to Karzai currently).

However, allegations of severe fraud have dogged the process, delaying the finalization of the results and calling into question the basic legitimacy of the election. With the political architecture of Afghanistan already fragmented, a new Karzai government could be fatally weakened if a significant portion of the allegations remain are not resolved.

Claims of shakedown and deceit are not something new in Afghani elections. The 2004 Presidential and 2005 parliamentary elections were also accused of allowing similar ballot stuffing, intimidation by political forces and the Taliban, and other problems. However, the scale of fraud was said to be considerably lower, while at the same time Afghani and international tolerance for the new process was certainly higher.

For people inside and outside Afghanistan, the basic question is whether the 2009 election is the continuation of a farce that began in 2004, or a step towards greater accountability and transparency in government. Perhaps the earlier rounds were similarly corrupt, except in this care the irregularities are being brought to light.

Nevertheless, the Electoral Complaints Commission, a body mandated by Afghanistan’s election law and supported by the UN, has received quite a number of electoral complaints. This body, which was established after the 2004 election, has wide-reaching powers that range from issuing warnings and fines (up to USD 2,000) to ordering a recount or revote, removing candidates from the ballot or invalidating individual paper ballots.

The current published figures from the ECC date from 12 September, at which point the commission had received nearly 3000 complaints, some directly and some forwarded from the Provincial Electoral Commissions. 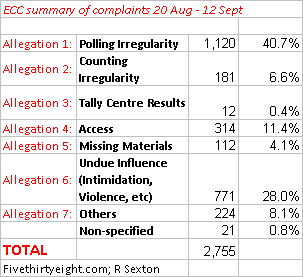 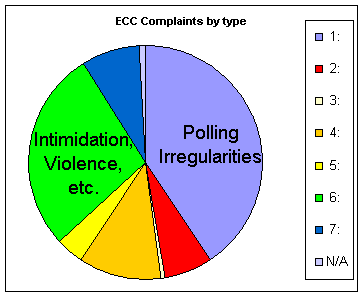 Not surprisingly, most allegations (about 70 percent), are of polling irregularities like ballot stuffing or removal or undue influence on voting through intimidation and violence. Geographically, the irregularities have been focused in a few major provinces, with Baghlan province, dominated by main Karzai-challenger Abdullah Abdullah, leading the way in polling regularities, while Kabul is atop the list of reported intimidation and violence. 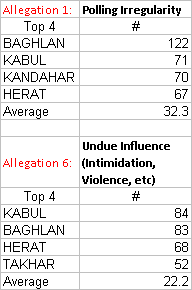 In response to the claims and a following investigation, the ECC has ordered a recount of all polling stations that had returns where more than 95 percent of the vote was carried by one candidate, as well as those for which turnout was 100 percent or higher, based on per-election estimates (each polling place was assigned. So far, the results of 81 polling stations in Kandahar, Ghazni, and Patika provinces have been declared invalid after allegations of ballot stuffing were proven true. More invalidations and ordered recounts are likely on the way, particularly in Baghlan province, where ethnic electoral violence was at its worst on election day. Whether this recount can resurrect the Abdullah campaign is yet to be seen, as between 10 and 15 percent of the total votes are expected to be recounted. Just a few hundred thousand votes changing hands could drop Hamid Karzai’s total beneath the 50 percent plus one requirement for victory.

The uncertainly has driven the international community, which began by taking a hard line in support of the election and its results, to begin to shift towards a public position of skepticism. UN Special Representative of the Secretary General Kai Eide initially called the 20th of August a “a good day for Afghanistan,” while US President Barack Obama described it as “an important step forward.” Today, however, the US, UN and the rest of the international community are quickly backpedaling. The National Security Council, representing US special envoy Richard Holbrooke, has strongly stated that the US “condemn[s] any acts of fraud; it is important that the outcome of these elections reflect the will of the Afghan people.”

Several possible endgames remain for the various big players in Afghanistan regarding the disputed election. NATO and the US have long been lukewarm with regard to Hamid Karzai, but have hoped that continuity will breed stability in the nation-building process. Northern supporters of Karzai, largely of non-Pashto ethnic groups, are certainly looking for an opening given the President’s apparent weakness. Even if Abdullah does not want to pursue a serious challenge in the end, a governing coalition for a new Karzai government will be a tough sale for some. Of course, a lot will rest on the ECC’s decision regarding the field electoral complaints, and how the national political actors react. Right now, however, uncertainty dominates as we play the waiting game.

In the next column, we will look at the major players and how the incentives shake out.

Update: The BBC is reporting that the final provisional votes totals are now in, with Karzai winning 54.6 percent (38.7 percent turnout). The EU observer mission has gone on the record, calling into question about a quarter of all the votes – about 1.5 million ballots.
—
Renard Sexton is FiveThirtyEight’s international columnist and is based in Geneva, Switzerland. He can be contacted at sexton538@gmail.com