Who was this ballot cast for? 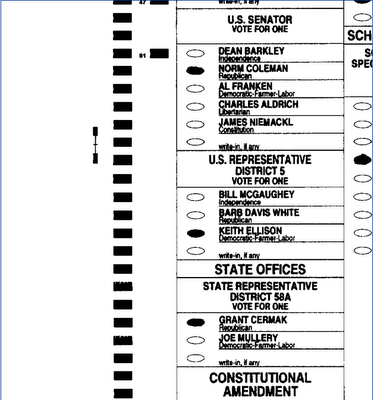 No, this is not a trick question. Unless your name is John Lott, Jr., Ph.D. and you just published an analysis at FoxNews.com.

The ballot in question, from Minnesota’s 4th Ward, 8th Precinct, was originally cast and counted for Norm Coleman. It was challenged by the Franken campaign, which claimed that it was a duplicate ballot, and designated as the 3rd challenge from that precinct. The challenge was subsequently withdrawn, as the Franken campaign withdraw essentially all of his challenges on supposed duplicate ballots. And appropriately, the Canvassing Board added the vote back into Coleman’s column (.xls). 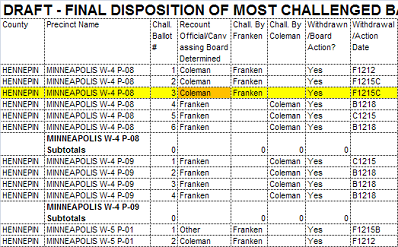 So where did Lott get the idea that the vote had been counted for Franken? Apparently from the Star Tribune’s website, which had it listed it that way. The Star Tribune, keeping an unofficial tally of more than 6,000 challenged ballots, apparently made a boo-boo.

This possibility appears not to have crossed Lott’s mind. Faced with two alternatives…

1. The Canvassing Board somehow determined that this was a Franken ballot;
2. The Star Tribune screwed up.

…Lott took Occam’s Razor and cut himself with it, and concluded that the former must be true, using it as his primary piece of evidence to allege the recount was slanted in Al Franken’s favor. The ballot is now featured prominently on the front page of the FoxNews.com website: 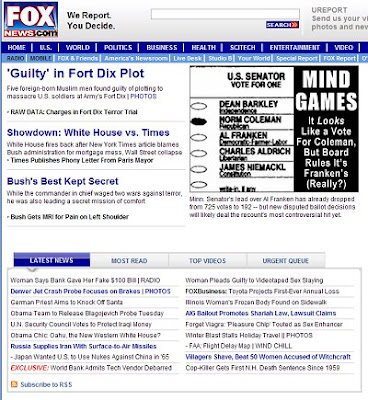 It’s been a bad day all around for the mainstream media. We can only assume that an upstanding organization like Fox News will be quick to post its retraction and apology…