As a resident of the Geneva, the volatile weekend in Switzerland hit quite close to home. In fact, the burning cars and smashed shop windows that marked Saturday’s major protests against the WTO were just around the corner from my apartment, though I headed out of town to spend the day in France.

Sunday’s vote, which Nate examined earlier this morning, addressed several hot button issues in Switzerland, a country known for it dueling identities as international broker of money and diplomacy and isolated & conservative rural alpine enclave. In addition to the ballot initiative to ban the further construction of minarets, a measure to ban the export of “materiel de guerre” (weapons, ammo etc.) from Switzerland was roundly defeated with 68 percent against, even in the peace-loving canton of Geneva.

Nate’s analysis on the minaret vote regarding religious affiliation and language is an important starting point, but certainly not the full story. I will briefly augment his analysis with a couple other variables that fill out the explanatory base and also have a few implications for the larger questions that were asked and answered by the “minaret controversy.”

When looking at the religious figures that Nate points to, there is one important point that it omitted — about 22 percent of Switzerland’s population are foreigners, including nearly 90 percent of Muslims residing in Switzerland. In fact, the official statistics likely underestimate the proportion, with many illegal laborers and short/medium term (6 months to 2 years) workers in international organizations and multi-national companies (many have European HQs in Switzerland for tax reasons) not fully counted. Still, as compared to other European countries (even those with high recent immigration), such as France (7 percent) or Italy (about 7.5 percent), Switzerland’s rate is quite high — though less than some other countries, such as the United Arab Emirates (68 percent of the country’s 4.2 million people are foreign laborers).

There are two major implications of this. First, the cultural clash in many Swiss cantons between traditional agriculturally-driven, conservative lifestyle and the “international” culture of more urban areas, who are dominated by the UN, banks and globalized companies, has become very pronounced. 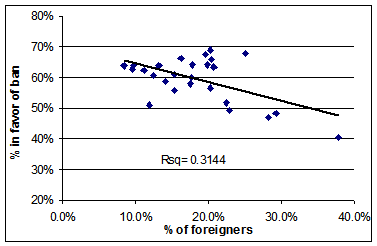 As it turns out, the percentage of foreigners in a given Swiss canton explains about a third of the variation you see in the percentage of the vote in favor of the minaret ban. Those cantons who have more foreigners were less likely to back the ban, which tends to support the suggestion that the more foreigners you are around, the less xenophobic you are in your voting. Not surprisingly, the UN and international organization centers of Geneva and bordering Vaud, as well as the city of Basel (which borders both France and Germany and has the highest Muslim concentration in the country) are in the bottom right.

The two “outliers” in the sample are the Italian-speaking canton of Ticino (25 percent foreigners, nearly 70 percent in favor of the ban), who represent the highly religious population that Nate mentioned in his analysis. Almost all the foreigners there are Italians aiming to escape for tax and business reasons, and are overwhelmingly religious Catholics (about 77 percent). The second outlier is the small canton of Jura, which though having a small foreign population, only barely supported the ban. This is likely due to the history of the canton, which had fought for its own independence of identity. Until the 1978, the Catholic and French-speaking Jura people were forced to be part of the Protestant, German-speaking canton of Berne. It could be this struggle for cultural indepence, along with their border with France, that drives a more tolerant attitude than would otherwise be expected.*

The trend is supported by the second internationally-charged vote of the referendum, regarding the export of weapons. 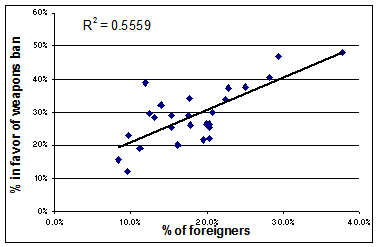 Just about the same cast of characters is deployed in this vote, with a high R-sq of 0.56 representing a good fit. Though no canton (even canton of Geneva, home of many UN humanitarian and human rights conventions, where just 48 percent voted in favor of the ban) supported the weapons export ban, there is clearly a strong relationship between international/foreign presence and a sense of conscience regarding the impact of weapons exports to about 70 countries.

Regarding the language factor, there is a complex and covariate relationship that cuts across identity issues. A 2000 study looked at the use of the five major languages in Switzerland in work settings — in other words, the percentage of Swiss residents (not voters) who used a given language in their working setting, collected by canton. 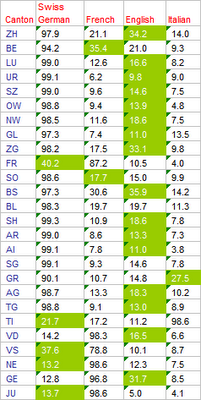 While the first language of each canton is well documented and commented, it is the second languages that are perhaps more interesting. Though not an official language, English leads the list in terms of second languages of work, with a strong role even in cantons with native-tongue speakers split between German and French (e.g. Berne, Valais, Fribourg). In most cases, Swiss workers are more comfortable in English than the other official languages of the country. English has also taken on a role as a de-politicized language of advertising, which means that more and more people are exposed to it in home settings as well.

This is all to say that the politics of culture in a country that is multi-cultural/lingual, yet insular (that is, not prone to being pushed by international or regional friends or foes) and isolated are very complicated politics indeed. The vote against minarets was perhaps a symbol of a wider vote against the growing international engagement that has ocurred in the last 20 years (a period during which, remember, Swiss voters twice rejected EU overtures).

If this is the case, it tends to give support to the idea that a similar action would not be well-supported in the United States. Though the U.S. is in many ways similar — isolated, insular regarding foreign intervention and multi-lingual — the ideas of national identity do not flow through as steeply through religion as they do on other social issues. Freedom of expression and religion are widely supported, while the freedom to have an abortion or freedom to marry a person of your choice (if he or she is of the same sex) are considered to fall into separate issue areas for many U.S. voters — particularly those who would be targeted to enact this type of ban. Unless it could be tied to some pressing national security issue, it seems easy for this initiative to be discarded as fundamentally un-American.

If the Swiss identity is split between the international world of banking and the UN and rural lifestyles agriculture and local trading, this vote shows that the most recent rhetorical backlash against financial and cultural globalization has had at least one collateral casualty.
—
Renard Sexton is FiveThirtyEight’s international columnist and is based in Geneva, Switzerland. He can be contacted at sexton538@gmail.com

Update: I was on BBC Radio 3 on Monday discussing this http://www.bbc.co.uk/iplayer/console/b00p6b0n (beginning 29:00)

* Removing these two cantons from the chart results in an R-sq of 0.51