You may remember this photograph — or one very much like it — from websites such as the Drudge Report: 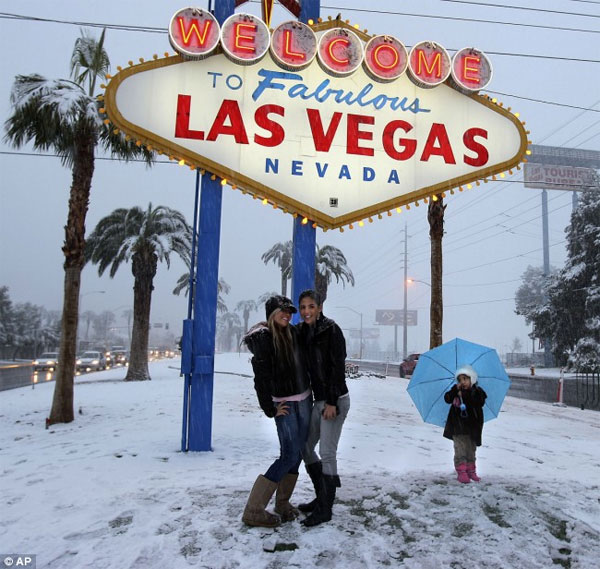 It turns out that a lot of other Americans may remember this sort of photo too, and it may affect their perceptions of global warming.

A new study by Patrick J. Egan of New York University and Megan Mullin of Temple University, in fact, finds a statistically significant relationship between recent weather conditions and beliefs about global warming. They write:

By matching geocoded survey data to local weather records, we find a significant relationship between local weather and beliefs about global warming. For each three degrees [Fahrenheit] that local temperature rises above normal, Americans become one percentage point more likely to agree that there is “solid evidence” that the earth is getting warmer.

Although Egan and Mullin are principally concerned with short-term, local fluctuations in temperature, one also wonders if longer-term, national trends play a role in perceptions about global warming. Gallup, for instance, recetly identified an increase in the number of Americans who think global warming concerns are exaggerated, and a decrease in the number who think that global warming has already begun or will take effect at some point within their lifetimes (from 75 percent in 2008 to 68 percent in 2009). Could cooler weather (or the perception thereof) be playing a part here too?

It seems that it very well could. From March 2008 through February 2009 (Gallup’s survey was conducted in March), the average temperature in the United States was 53.2 degrees, a fairly typical figure by historical standards, but the lowest one recorded over a comparable 12-month period since March 1997-February 1998. By comparison, U.S. temperatures from March 2007 through February 2008 had averaged 54.5 degrees Fahrenheit, one of the higher figures on record.

Gallup, in fact, has asked this question for a number of years, first in November 1997 and then in March of each year from 2001 through 2009. The chart below presents a comparison of the percentage of Americans expecting to see the effects of global warming within their lifetimes (or who claim to have already seen it) against average United States temperatures in the 12 months prior** to each survey being conducted. 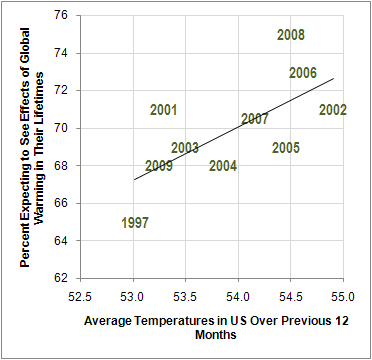 **Previous 12 months indicates March-February temperature averages for each survey year from 2001-2009, and December 1996-November 1997 averages for the 11/97 survey. In March 2007, Gallup asked this question on two separate occasions; responses from those two surveys are averaged.

These results actually suggest a somewhat more profound relationship than Egan and Mullin identified from local data; each increase in average US temperatures in degrees Fahrenheit is associated with a 2.8 point increase in the percentage of Americans who expect to see the effects of global warming by the end of their lifetimes. Although we should caution against overinterpreting this data since we have only ten observations to work with, the relationship is nevertheless statistically significant at the 95 percent level. (A further caution: the effect decreases to 2.0 points if the discontinuous 1997 data point is dropped and the statistical significance drops to 85 percent).

It may seem implausible that Americans can remember discrepancies in average temperatures of as little as a degree or two, and even more so that it will affect their perceptions about global warming to a material degree. Something of a cottage industry has emerged on the right, however, to treat any period of below-average temperatures, even of a few days, as a point of evidence that global warming concerns are exaggerated. Meanwhile, normally fair-minded and intelligent conservatives like Michael Barone use weasel-worded phrases like “temperatures actually haven’t been rising over the past decade” while skirting over the fact that temperatures throughout the last decade have been significantly higher than in the past (each of the last 11 years has each been associated with above-average temperatures in the United States, although 2008 was only barely so). Nor are conservatives like Barone likely to mention that temperatures were above average in 2008 almost everywhere BUT the United States and Canada: 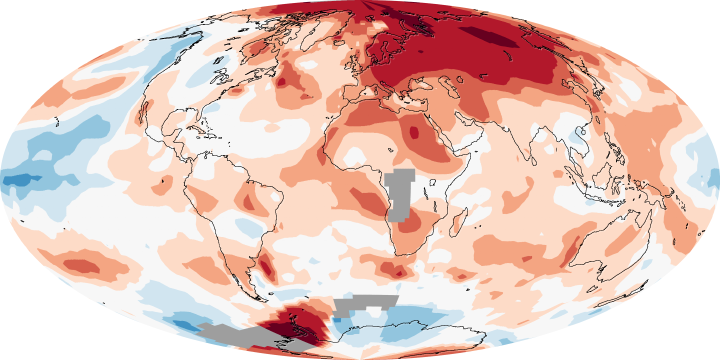 Barone further suggests that a belief in global warming “has taken on the character of religious faith” for “liberal elites”. If he is arguing that liberals take science as seriously as conservatives take God, then I suppose we should take that as a compliment. At the same time, the fact that Barone, or Matt Drudge, or Fred Barnes, or (more notoriously) George F. Will treat climate change as yet another bit of truthiness to be passed through the spin cycle is something which should both appall and alarm liberals: the former because nothing is a surer sign of the conservative elite’s capacity for intellectual dishonesty, and the latter because perceptions about climate change are literally as fickle as the weather, and liberals are losing ground in the spin war at the very time they have the opportunity to advance serious policy reforms to mitigate it.