Mario Ancic never won a Grand Slam tournament; he never even reached a final. He peaked at No. 7 in the world, with a Davis Cup win and an Olympic bronze medal, before illness and injury cut his tennis career short. This week, the 30-year-old Croatian started his final year at Columbia Law School, where he’s preparing for his next career — even as his old friends and rivals gather elsewhere in New York City to compete for the U.S. Open title.

But Ancic earned one distinction that ranks him among only a few boldface names in tennis history: On the sport’s biggest stages, he almost always lost to the very best.

In his seven years of Grand Slam play, Ancic lost 21 matches. The list of players who eliminated him is a partial who’s who of tennis greats over the last two decades, with just a few interlopers. Of the 25 men who have been No. 1 in the world in the 41 years of ATP World Tour rankings, seven beat Ancic at a Grand Slam. Andy Roddick beat Ancic twice at Grand Slams. Roger Federer did it four times in a little over two years.

Even the 10 non-No. 1s who knocked off Ancic were a pretty impressive bunch. They include four other Grand Slam finalists, plus two others who were ranked in the Top 10 when they knocked him out of a major. 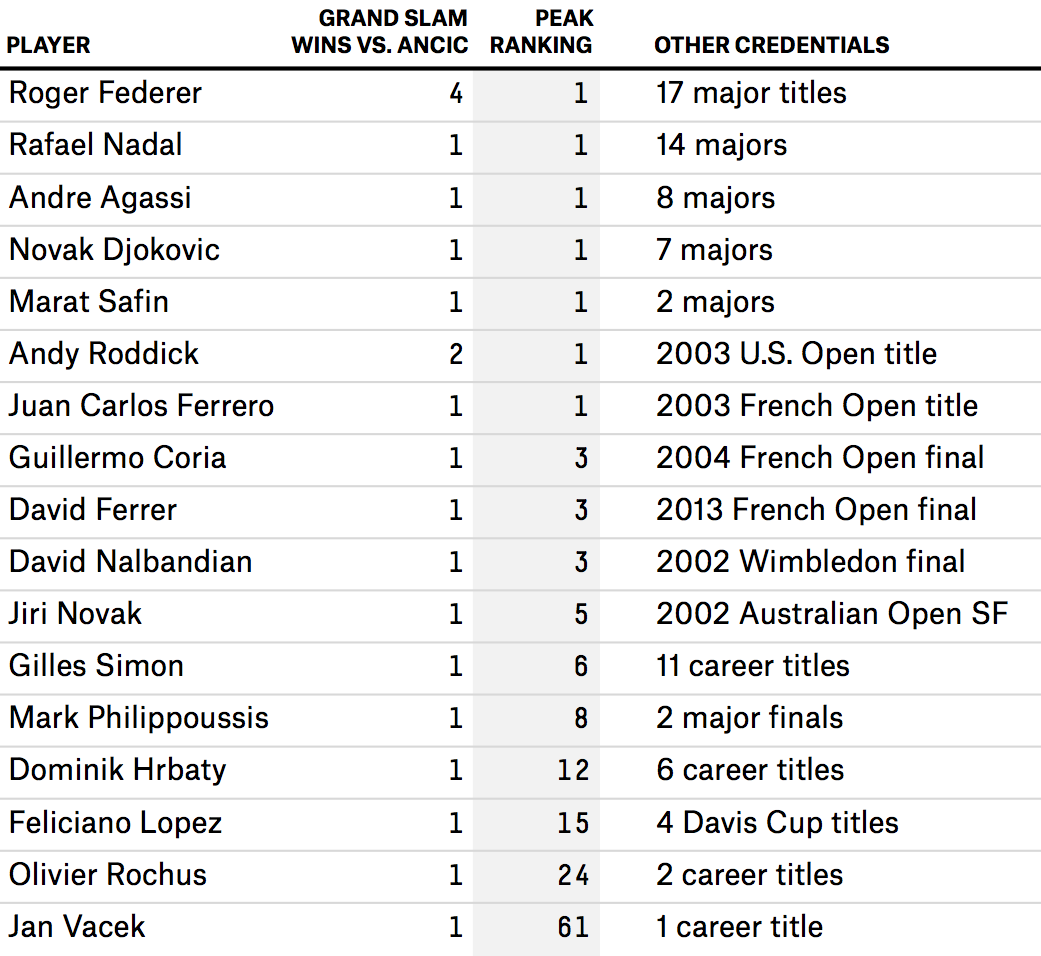 The quality of a player’s conquerors is a product both of luck and of the player’s own abilities. Some players are so consistently good that they either win the big tournaments they enter or beat all but the very best. Others suffer from poor luck of the draw — like Ryan Harrison of the U.S., or Amer Delic of Bosnia, who faced one-time No. 1s in five of his 10 Grand Slam losses despite never advancing past the third round. Every time the guy thought he was going to get to kick the football, a Lucy — or Novak — yanked it away. Unlike, say, the orderly NCAA tournament bracket, tennis tournaments distribute their entrants randomly, within the constraints of rules preventing the best players from facing each other too early.

A handful of other players have lost mostly to the very best, but for slightly different reasons than Ancic did. Only four men with more than 10 Grand Slam losses were facing former, current or future No. 1s in at least half of the losses, according to data provided by Jeff Sackmann, proprietor of the website Tennis Abstract: Ancic, Novak Djokovic, Juan Martin del Potro and Andre Agassi.

Djokovic and del Potro are recent Grand Slam champions who have had the misfortune of playing during the reign of Federer and Rafael Nadal, one-time No. 1s who consistently reach the later stages of majors. Neither Djokovic nor del Potro has lost to as many different No. 1s as Ancic did, despite already having longer careers. Agassi is one of the all-time greats and usually was ranked in the Top 10 when he headed into Grand Slam events, so it’s not surprising that it usually took a top player to knock him out of big tournaments.

Ancic’s story is quirkier. He was never ranked above 10th in the world heading into any Grand Slam tournament. But he often rolled in the early rounds, as his aggressive serve-and-volley style overwhelmed opponents. He combined that with a knack for drawing tough opponents in later rounds, and usually losing to them; he was 3-11 at Grand Slams against players who at one point were ranked No. 1. Sometimes he had to play them before their prime: As teenagers ranked outside the Top 75, both Nadal and Djokovic beat Ancic at Grand Slam tournaments. Sometimes he had to play them earlier in the tournament than he could have expected to: Ancic had a 25 percent chance of ending up in Federer’s quarter at any given event, yet he did so in four of five Grand Slams he played between 2006 and 2008. Federer was ranked No. 1 in the world each time. Ancic didn’t win a set in any of the matches.

Ancic, who has a law degree from the University of Split in Croatia, sees no injustice in his tough Grand Slam record. He just wishes he could have reaped the benefits of his early losses by reversing some of those results once he reached what should have been his prime.

“I saw those losses as a challenge — to improve my game, to improve the things I needed to do,” he said in a telephone interview. “That’s part of the fun of being an athlete: challenging yourself against the best of the world. I was never in despair — ‘Oh my God, if I didn’t play Roger in the quarters, if I had a better draw, maybe I’d play in the final of a Slam.'”

Ancic felt he was learning from his losses. But then, when he was 22 years old, he battled mononucleosis and other health problems. He came back, several times, but other than one six-month stretch and a later five-month stretch in which he appeared in at least one event each month, his career was stop-and-go. Right when he thought he should be peaking, he was watching his career end. A back injury that would have kept him sidelined for a year convinced him to retire in 2011. Now he occasionally hits with the Columbia team and feels much better physically.

Ancic is glad to be at Columbia and creating a new life, but he regrets not realizing his potential. “I’m sure I never achieved my top,” he said. “I still felt my peak was coming later.” He added, “I don’t like to think what would have happened if things were different.”

If Ancic really had kept getting better, even more of his losses would have come against top players. And there’s lots of evidence that he was on pace to be one of the best of his generation. He led the under-20 rankings at the end of 2002 and the under-21s in 2004, and was second to Nadal among under-23s in 2006. And more tennis players stay competitive into their late 20s and early 30s these days. Six of the eight U.S. Open men’s quarterfinalists this week were 27 or older; Ancic is 30. Ancic faced each of those quarterfinalists during his career, beating six of them at least once — four at Wimbledon, his best tournament.

Ancic remains close to the sport. At his invitation, Djokovic spoke to Columbia law students when in town for an exhibition in March. Ancic attended the U.S. Open on Monday as the tournament’s guest, where he caught up with some old friends who remain on tour. He also continues to follow the game keenly. He predicts Djokovic and Federer will meet in the final this year. If that matchup materializes and Federer wins, Djokovic will have the booby prize of increasing his percentage of Slam losses to one-time No. 1s.

Ancic lost to both men at Grand Slams but also beat them both, at Wimbledon — no easy accomplishment against two all-time greats who together have won nine of the last 12 Wimbledons. “We are talking here about a couple of guys who are among the best ever,” Ancic said of Djokovic, Federer and Nadal. “It’s an honor to compete with them.”