In the UK electoral context a major concern is the relationship between the national popular vote share and the share of MPs that each party wins as a result. In particular, the former is what is polled regularly, while the second is what actually determines which party controls the House of Commons and therefore the government.

Because the UK has a first past the post system, as we discussed previously, large national parties have an inherant advantage, often out-performing their national vote share numbers by a significant margin. In recent years, this has been to Labour’s advantage. 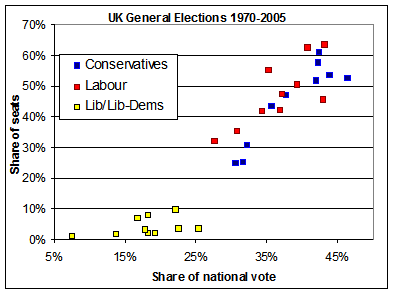 As we should expect, there is a strong positive relationship between national vote share and share of MPs, using the period 1970 to 2005. 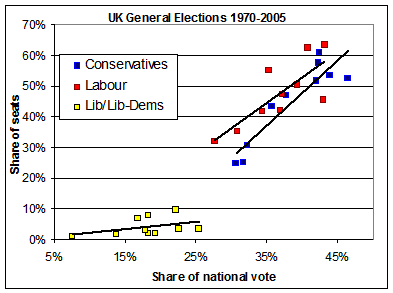 Unfortunately for the Lib-Dems, the relationship is quite strong, but yields a very low return on investment in terms of MPs in the end. For Labour, the regression yields a 5-10 point average over-performance over the course of 35 years. 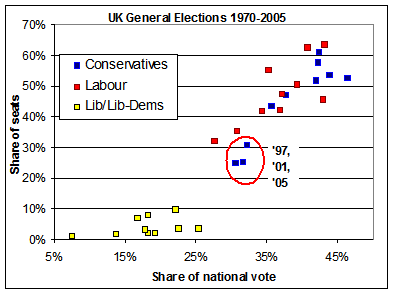 Here’s where it gets ugly for the Tories. The three most recent elections — 1997, 2001 and 2005 — were the worst three in the sample set in terms of underperformance. While they earned a low but respectable share of the national vote, they got creamed in terms of MP share.

As put by the Wall Street Journal: “The British electoral system does have its problems—chief among them being a constituency map that gives Labour a built-in advantage sometimes estimated to be equal to 10% of the national vote.” 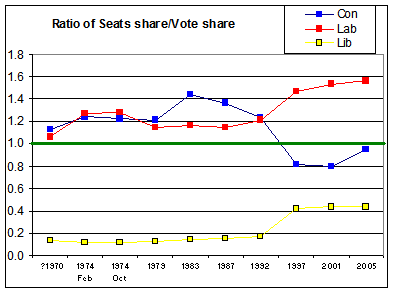 Looking back over the last 35 years, it turns out that this claim, commonly made in the US and UK press, is indeed the case for the last three elections, but not beyond that. In fact, from 1979 to 1992, the Tories enjoyed an electoral advantage that inflated their vote share signficantly more than Labour. 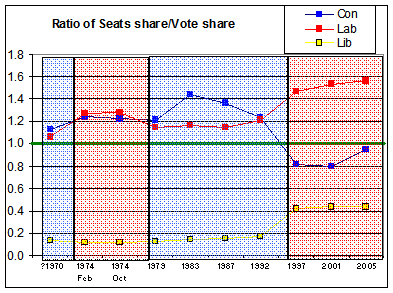 Overlaying each election with its eventually winner, we see an important trend. Looking through the sample period of 1970 to 2005, in each of the five elections in which the Tories prevailed, they enjoyed the “built-in” advantage. Similarly, in the five elections that Labour won, it was they who overperformed their vote share — in recent years by a quite large margin.

As a result, there is a vital factor that has not yet accurately been accounted for in projections of the election’s results: In 2010, what will the over/under performance ratio for each of the big three parties be?

Without a good estimate of this, the horserace numbers can give us only a general feel for the national sentiment and perhaps motivation of each base.

1. If Labour can hold the ratio at 1.6 (unlikely due to boundary commission decisions), they would need just 32 percent of the vote to get a bare majority

2. In instead the Tories can edge their bit up to 1.2 as seen in 1992, they could earn a majority with just 42 percent of the vote. If instead it stays at 2005 levels, they would need over 50 percent — something they remain 10 points away from in polling numbers.

3. The Lib Dems have performed much better in the last three elections than previously in terms of MP ratio. Can they continue to improve on this front, as well as pulling a greater national share?

Moving forward, the key for election observers will be to accurately evaluate demographics, boundary changes, clear voting blocks and the role of regional parties (in Scotland and Wales in particuar) as they impact the final distribution of seat. Rather than looking at the national numbers and applying the “10 point” heuristic the WSJ alluded to, we will need to be more accurate — particularly in such as tight race, including the possibility of a hung parliament.

For the Conservatives, it will be a two fold fight — earning more popular votes overall, and making sure they come in districts they can win rather than spread nationally to reverse their under-performance of the last three elections.

Next up in the UK election series: We will do some critical review of the current projection models and estimation techniques for the vote share/seat share ratio.
—
Renard Sexton is FiveThirtyEight’s international affairs columnist and is based in Geneva, Switzerland. He can be contacted at sexton538@gmail.com