President Obama will begin his second term more popular than he has been for most of the past three years. His approval rating is 52 percent, according to the RealClearPolitics average, against 43 percent who disapprove of his performance. (Mr. Obama’s numbers in the latest New York Times/CBS News poll are similar: 51 percent approval and 41 percent disapproval.)

I have extended Ms. Connelly’s analysis to cover all second-term presidents since 1949, based on the historical approval ratings as listed by the Roper Center. There is nothing complicated about this analysis: I have simply averaged together all approval ratings polls conducted in January in the first year of a president’s second term. (Keep in mind that Harry S. Truman in 1949 and Lyndon Johnson in 1965 were serving in their first elected term in those years, but their second term over all.)

All recent second-term presidents began their new terms with approval ratings above 50 percent (although barely so in the case of Mr. Obama and Mr. Bush). This ought not to be surprising: after all, each of these presidents had just been elected or re-elected, and it is hard to accomplish that unless at least half of the country approves of how you’ve done your job.

However, it used to be that presidents enjoyed a “honeymoon period” at the beginning of their second term, with a large number of Americans who had failed to vote for them nevertheless expressing their best wishes.

Compare Truman in 1949, for example, to Mr. Obama today. Both won the popular vote by a similar margin, about four percentage points. They also got a similar share of the popular vote (51.0 percent for Mr. Obama, 49.6 percent for Truman). Both had experienced somewhat embattled first terms — Truman, whose approval ratings were as low as about 35 percent during parts of 1946 and 1948, probably even more so than Mr. Obama. 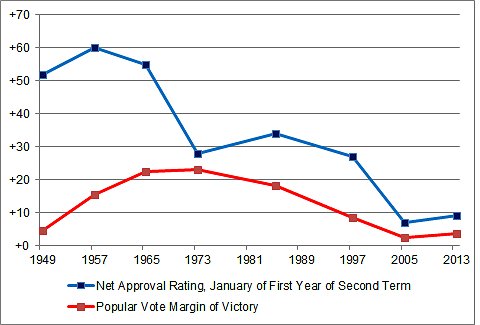 With partisanship being what it is today, and political attitudes being so hard-wired, presidents don’t seem to get the benefit of the doubt from voters in the same way they once might have. Mr. Obama’s first term had been an exception: his approval ratings averaged about 65 percent just after he was inaugurated in 2009, perhaps because of the historical importance of his having become the first African-American president. But his approval ratings and political capital faded quickly.

Speaking of which, do a president’s approval ratings at the start of his second term tell us very much about how popular he is likely to be throughout it?

Not very much. Truman’s approval ratings, for example, wound up averaging only about 37 percent throughout his second term, despite the initial boost of popularity that he received. (History remembers Truman more fondly than voters did at the time.) Richard M. Nixon and Mr. Clinton began their second terms with similar approval ratings, about 60 percent. But Mr. Clinton maintained those ratings throughout his second term, while Nixon resigned in disgrace.