It is tempting to think of Illinois as being displaced on the political map — a Northeastern state trapped in the body of a Midwestern one.

In the context of a general election, that view might be right. Illinois is the seventh-most Democratic state in the country based on its voting in the last two presidential elections, trailing only five Northeastern states and Hawaii.

Moreover, almost two-thirds of Illinois’s population lives in the Chicago metropolitan area. Chicago (where I lived until 2009) isn’t New York or the San Francisco Bay exactly. But it is probably closer to that end of the spectrum than it is to Cleveland or Kansas City or Indianapolis, having the nexus of culture, architecture, ethnic diversity and business activity to qualify it as a great world city.

Chicago, however, is disconnected from the rest of the state. In the 13 years that I lived there, I don’t think I even once described myself as living in “Illinois.” At the risk of overgeneralizing from personal experience, I suspect that most Chicagoans think the same way. To a Chicagoan, Illinois is the name of the jurisdiction to which you pay your state taxes and the funny word that appears in the top left-hand corner of your drivers’ license. But you live, eat, breathe and work in Chicago or one of its suburbs.

Compare the maps below, produced by M.I.T.’s Senseable City Lab, that show the volume of cellphone calls placed between one county and another. In the map for rural Macon County, Ill., the state outline is clearly visible, and there is fairly little interaction beyond those borders. In the map for Chicago’s Cook County, however, cellphone calls were as likely to be placed to Phoenix, Seattle, Boston or Miami as they were to the rest of the state. 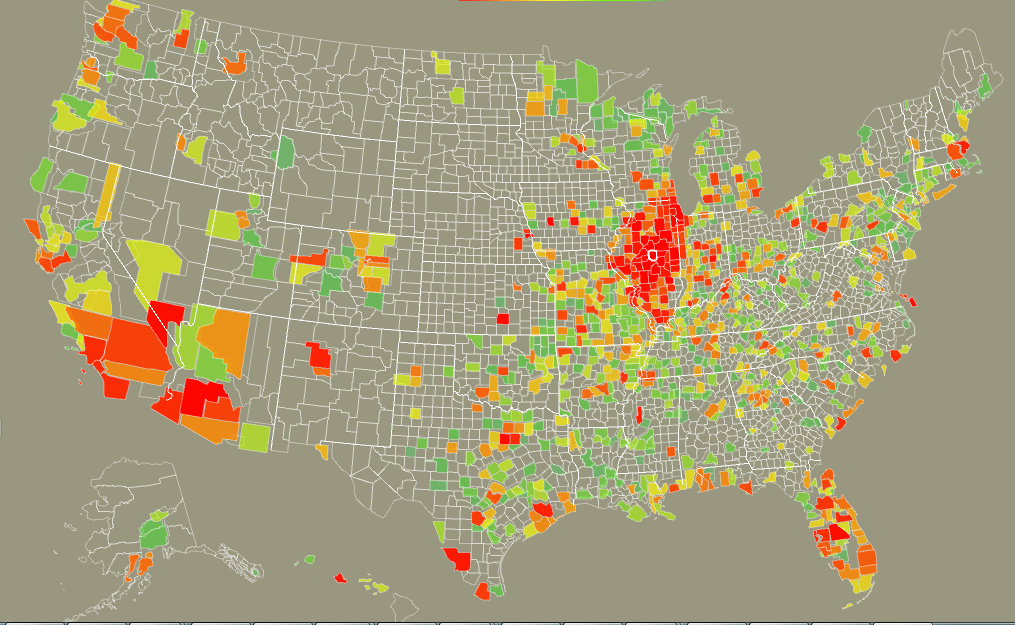 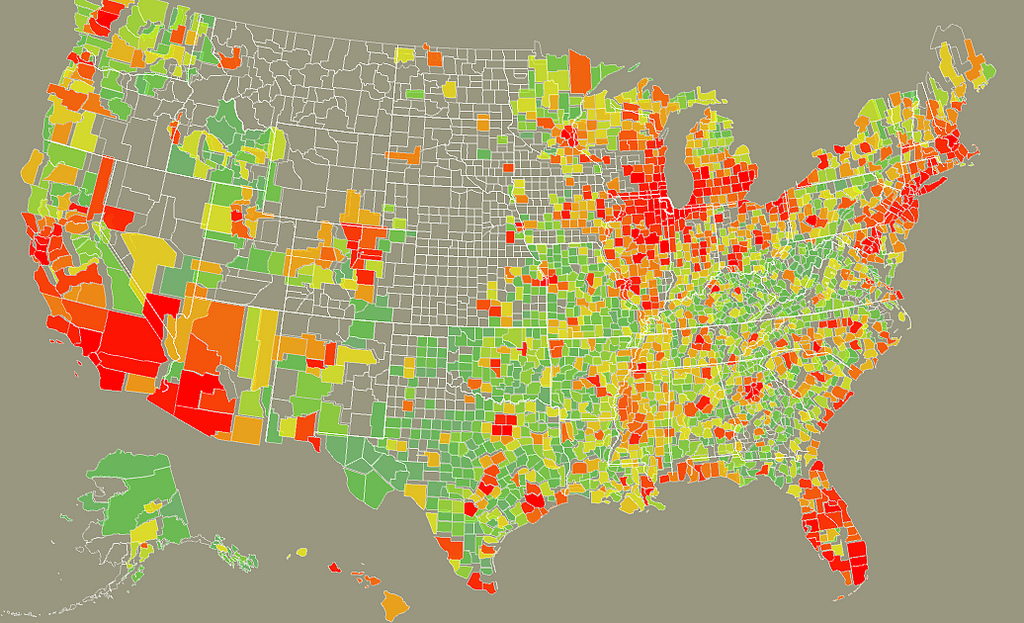 If turnout in the Republican primary were proportional to the population in Illinois, Mitt Romney would almost certainly win the state — and probably by a double-digit margin.

But it won’t be. The Chicago area is so Democratic that the rest of the state is on an even keel with it in the context of a Republican primary.

The political geography of Illinois can be thought of as a series of concentric circles radiating out from Lake Michigan. First, there is the city of Chicago itself, which is Democratic almost without exception. John McCain won just 14 percent of the vote there in 2008, less than even the 20 percent he took in New York City. There is no part of Chicago proper equivalent to Staten Island, where Republicans can hold their own; Mr. McCain lost all 50 wards in the city. He carried just few precincts near O’Hare Airport, and then only barely. 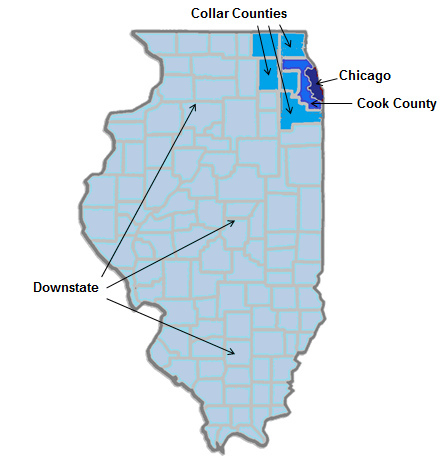 The rest of Cook County, and the five “collar counties” that surround it — DuPage, Kane, Lake, McHenry and Will — were once a Republican stronghold. Bob Dole, for instance, won three of the five collar counties against Bill Clinton in 1996 despite losing badly in the state and nationwide. But they have shifted to becoming swing counties, or slightly Democratic-leaning, in recent years.

The rest of Illinois has become more Republican. Mr. McCain, in fact, carried the majority of counties in Illinois in 2008 despite losing the state by 25 percentage points to Barack Obama.

The consequence of this partisan skew is that what Chicagoans refer to as “downstate,” meaning anything outside the Chicago metropolitan area (as New Yorkers refer to Binghamton or Buffalo as “upstate”), makes up close to half the Republican turnout. Almost exactly 50 percent of Mr. McCain’s voters in the 2008 general election were downstate, as were 47 percent of voters in the state’s 2008 Republican presidential primary. 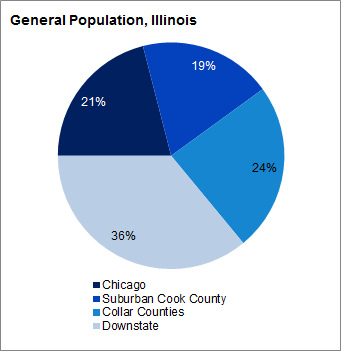 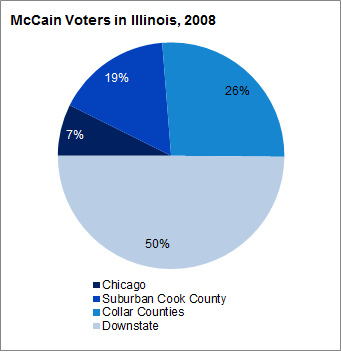 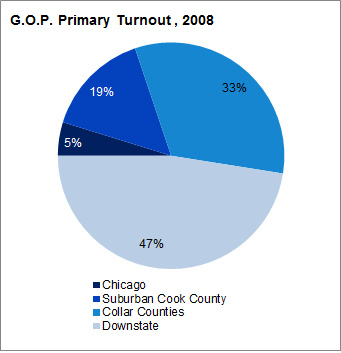 The state of Illinois — sans Chicago — is unfavorable territory for Mr. Romney. Parts of it are more like Iowa, while parts of it are almost Southern — but Mr. Romney hasn’t performed well in either area. Of the $1.9 million in itemized contributions that Mr. Romney has raised from Illinois, only about 9 percent is from ZIP codes outside the Chicago metro area.

Mr. Romney should do very well, however, in the Chicago suburbs, which still have their share of Republicans. Mr. Romney is not an ideal stylistic fit for the Chicago area: it likes its politicians with a little more salt and bombast than Mr. Romney has. But he is certainly a far better match for suburban Chicago than Mr. Santorum is.

But while Chicago and downstate come close to balancing out, they do not do so exactly. Mr. Romney has had a very slight lead in the most recent polls of Illinois. And with the candidates spending relatively little time on the ground there, his advantages in advertising and organization should give him a slight edge.

Still, Illinois is close enough to even that it represents the best and perhaps last opportunity for Mr. Santorum to show that the dynamics of the race have changed.

Mr. Santorum missed his chances to upend Mr. Romney in two broadly similar states, Michigan and Ohio. Perhaps Mr. Santorum can make some excuses: Michigan was Mr. Romney’s native state — and Ohio voted while Mr. Romney was still benefiting from the momentum of his win in Michigan. If the states had voted in the reverse order (Ohio going on Feb. 28, Michigan on Super Tuesday), the dynamics would have been different and Mr. Santorum might have carried both.

Mr. Santorum no longer has the time for such counterfactuals, however — not when he trails Mr. Romney by 243 delegates. It will not enough be for Mr. Santorum to perform up to expectations. He needs to beat them to make up the ground that he has already lost.

Winning Illinois, in fact, would be one of Mr. Santorum’s easier tasks if he wants to win the Republican nomination. He would need to follow it up with a very strong performance on Apr. 3, when Wisconsin and Maryland vote, and then limit Mr. Romney’s delega
te accumulation in the coastal states that dominate the calendar on Apr. 24 and in June.

Mr. Santorum will very likely win downstate, while Mr. Romney should carry Chicago and its suburbs. The question is who wins the amalgam that they form: Illinois.