After several early roadblocks, Mitt Romney now has a fairly certain path to the Republican nomination. He has received less support, however, among rural and more conservative voters – the base of the Republican Party in recent elections.

It is a similar situation to the one Senator John McCain faced four years ago. Two days after Super Tuesday in 2008, the Los Angeles Times wrote:

With John McCain racking up delegates on a steady march toward the Republican presidential nomination, deeply conservative voters are at a loss. They don’t like McCain. They’ve tried, and failed, to stop him.

Substitute Mr. Romney for Mr. McCain and you have a good assessment of the 2012 Republican race. Dissatisfaction with Mr. Romney among conservative and rural voters has kept blood pumping through the arteries of Rick Santorum’s candidacy, just as it did for Mike Huckabee’s in 2008.

But the disparity in voting patterns between Republicans in rural counties and Republicans in and around cities this primary season has been even more pronounced than it was in 2008, suggesting Mr. Romney might have an even harder time than Mr. McCain in unifying his base and motivating them to vote in the fall.

One way to gauge the difference in rural and urban voting patterns is to look at a classification system from the White House’s Office of Management and Budget, which divides counties into two types:

Metropolitan Counties include “core” counties, which have at least one densely populated urbanized area, and outlying counties that are economically tied to the core county as measured by the share of residents that commute to and from the core county.

Nonmetropolitan Counties include all counties that do not meet the definition of a metropolitan county.

Fuller definitions for each term are available here, but keep in mind that the metropolitan and nonmetropolitan classifications are not exactly synonymous with urban and rural. Nonmetropolitan counties include some less populated or more isolated suburban communities. 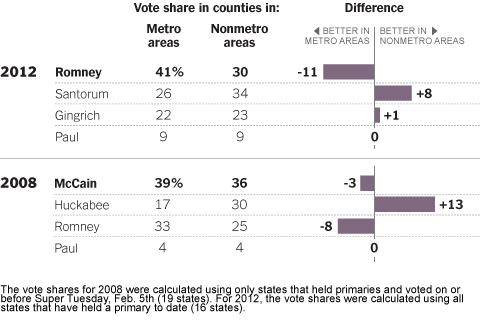 A more granular picture of the urban-rural divide is available in the “Rural-Urban Continuum Codes” from the United States Department of Agriculture’s Economic Research Service. The U.S.D.A. assigns every county in the nation a grade from 1 through 9, where a 1 denotes the most densely populated, urban counties and a 9 the most sparsely populated and isolated rural counties (full definitions here). 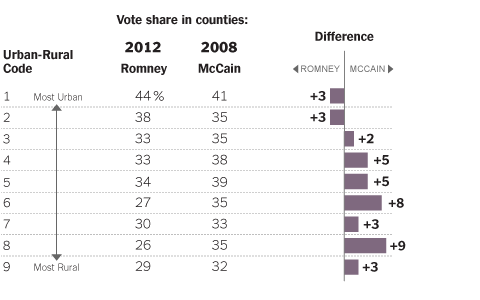 This shows the same broad pattern. Mr. Romney has won 44 percent of the cumulative vote in the most urban counties and just 29 percent in the most rural ones. He performed slightly better than Mr. McCain in the two types of counties that the U.S.D.A. classifies as most urban, but lagged behind him everywhere else.

It is difficult to pinpoint exactly why Mr. McCain was more successful than Mr. Romney in courting rural voters. Military installations are most often located in less populated regions, and perhaps Mr. McCain’s military bona fides made the difference. Mr. Romney never served in the armed forces. Rural voters are also more likely to be evangelical Christians and they tend to have lower incomes, also factors that have not favored Mr. Romney.

But geographic factors have seemed to play a role in the Republican race alongside demographics.

Indeed, the geographic split between Mr. Romney and his Republican rivals has closely resembled the ones typically seen in a November campaign. Mr. Romney, as Democrats sometimes do in the fall, has often won a state by carrying a few high-population urban and suburban counties even while losing almost all others. Whether that will translate into turnout problems for Mr. Romney in November is unclear, but it is a nontraditional pattern for a Republican nominee.