When Switzerland entered the “Schengen Area,” that is, the group of twenty five continental European countries who allow passport-free movement of people among themselves, it was after decades of strong Euro-skepticism. After referenda strongly rejected the accession of the country to the European Economic Area (the precursor to the 1993 establishment of the EU) and subsequent ballot initiatives to re-open negotiations to join the EU failed with more than 75 percent of voters against, it seemed quite unlikely that the free movement of people would ever come to pass.

So, when I flew back to Geneva in March by way of Paris, after a short visit to the US, I was shocked to find myself walking straight through to customs, with my entry stamp from Charles-de-Gaulle good enough for the Swiss authorities.

At this point, freedom of movement is the leading edge of integration with the European system for the Swiss, with their high importation tariffs and controls, a strong committment to the Swiss Franc as the national currency, strenuous immigration requirements, opaque banking system, and neutrality-focused foreign policy. Indeed, in 2006, the Swiss Federal Council changed the official Swiss position regarding EU membership from “a strategic goal,” to “an option.”

For the rest of Europe, however, it is the impending passage of the Lisbon Treaty that defines the cutting edge of European integration. Signed in December 2007, the treaty has undergone more than 73 legislative, executive, royal, and judicial activities in the 27 EU countries. These have ranged from the official permission from the Duke of Luxembourg, no less than 10 separate regional legislatures, language community committees and special Brussels authorities in Beligum, along with the the ill-fated first 2008 referendum in Ireland that was the only failing vote on the treaty (and was overturned just a few weeks ago).

The Treaty of Lisbon is intended to improve coherance and streamline decision-making in the EU, and establish an appointed President of the European Council (the EU member states), who will serve a 2 1/2 year appoint term, instead of the current 6 month rotating Presidency. Approved by all the requisite parliaments, royal leaders, and the like, the treaty requires only the pro-forma approval of conservative, euro-skeptic Czech President Vaclav Klaus.

Klaus has decided to use this opportunity for a political stand against European integration, and insists that legal actions questioning the constitutionality of the treaty brought by conservative parliamentarians must be allowed to come to completion before he signs. The Czech constitutional court is set to review the case early next week.

Whether these efforts are meaningful, in practical terms, is up for debate. While there has been a great deal of heartburn about Lisbon from conservatives around the continent, it turns out that few issues that treaty addresses are meaningful to regular Europeans.

Eurobarometer polling published in September, which admitedly covers just the twenty seven EU countries, indentified ranks two issues far above the others in terms of the EU’s role for its citizens. The two main practical impacts of European integration, common currency and common market, in terms of the movement of people travel) and the movement of workers and students (permanent work and study) are understandably the two key things that EU represents to Europeans. Speak to any regular person, be it Berlin, Athens or Ljubljana, you will find this to be true. 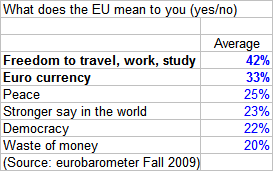 To measure these two issues (splitting travel and work, as the treaty system does), we can have a look at major European countries in terms of their participation in the common-currency Eurozone, the passport-free movement Schengen Area, and the European Economic Area, which encompasses free trade, common customs, and the freedom to work and study. 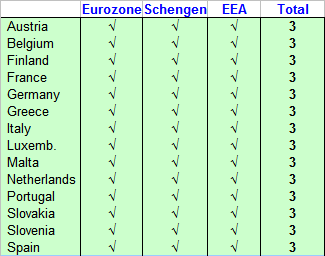 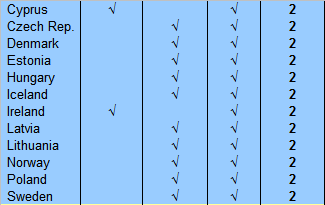 Regardless of the Lisbon Treaty, integration will continue, with eight countries on track to join the Eurozone in the next five years, and several others considering doing so. Liechtenstein and Cyprus are expected to join the Schengen Area in 2010 or 2011, while the new EU states of Bulgaria and Romania are on track to become part soon after, leaving just the UK and Switzerland outside of the “two or more” group.

Indeed, as French President Nicolas Sarkozy criticized President Klaus for his hold-up on the Lisbon Treaty, he suggested that the U.K.’s refusal to adopt the Euro would be a major stumbling block for former British Prime Minister Tony Blair becoming the inagural President of the European Council. Though Sarkozy intially introduced Blair’s name into the process, he was not sure if he is the right choice. “Personally I believe in a Europe that is politically strong and embodied by a person. But the fact that Great Britain is not in the euro remains a problem,” he explained.

So though the current Czech leadership, strong Euro-skeptic parties (such as those in Austria and the Netherlands), and other naysayers dominate the public dialogue right now, the real question will how the countries on the bottom end of the chart, namely the U.K., Switzerland, and to a lesser degree Norway, will change in the coming decade. Does the perception of inevitibility come into play at a certain point, or do national priorities dominate enough that this image does not come through?

The issue has been discussed and debated a hundred times since the negotiations of the Maastricht Treaty, which established the EU, in the early 1990s. But with a new generation of ERASMUS-educated civil servants and political leaders and a likely common foreign policy, the option for countries to “opt-out” begins to seem more permanent than temporary.

While we are watching for the results of the Constitutional court in the Czech Republic, we can also look forward to next spring’s UK General Election. After twelve years in power and facing a surging opposition, the ruling pro-Europe Labour Party looks ripe for a toss-out. And with the Conservative Party’s shift to the euro-skeptic European Conservatives and Reformists political group, it seems quite possible that EU integration may be an important card on the table.
—
Renard Sexton is FiveThirtyEight’s international columnist and is based in Geneva, Switzerland. He can be contacted at sexton538@gmail.com