The selection of Cardinal Jorge Mario Bergoglio of Argentina as the new pope, Francis, was largely unexpected by betting markets and Vatican experts, in part because of his advanced age. Cardinal Bergoglio, 76, is probably the ninth oldest of the 266 popes at the time of his election, accounting for some uncertainty because the age of many early popes remains unknown.

As a matter of actuarial science, Francis is not likely to have an especially long tenure. The nine previous men who were known to be 75 or older at the time of their election to the papacy served for an average of only five years.

That may be too pessimistic an estimate in the case of Francis: it is based on a small sample size and does not account for modern improvements in health and medical science. Acknowledging that there are considerable lifestyle differences between an Argentinian pope and an average American citizen, the life expectancy for a 76-year-old American man is now about 10 additional years. Of course, Francis could follow Benedict XVI’s precedent by resigning the papacy before his death. It is probably safe to say that a tenure shorter than five years would be considered brief for Francis, while a regime of much more than 10 years might be unexpectedly long.

The cardinals who elected Cardinal Bergoglio are probably not looking up actuarial tables, but they presumably have some intuition about how long his papacy might last. So one question is whether they saw his advanced age as a liability — or an asset.

How might Francis’ age be advantageous? One reason is that, if he were to serve 5 to 10 years, that would actually be very well in line with historical precedent. Beginning with St. Peter in 33 A.D., there have been 266 popes in 1,980 years, or about one new pope every seven and a half years. Benedict XVI’s regime, which lasted for seven years and 315 days before ending in February, was also well in line with this historical average.

The Roman Catholic Church has gone through different fashions in the ages of its popes. They rose steadily throughout the 16th and 17th centuries, culminating with the selection of the 79-year-old Clement X in 1670. However, as the chart below suggests, there was also a very considerable increase in the life expectancy of popes during this period. Popes were starting their pontificates at a later age, but also ending them at a later age; thus, there was little change in the length of their papacies, which averaged about seven years. 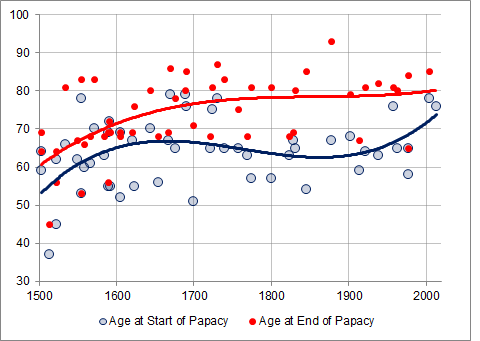 The Catholic Church continued to elect older popes throughout the late 17th and early 18th centuries, a period that included the selection of the 79-year-old Alexander VIII, the 76-year-old Innocent XII, the 75-year-old Benedict XIII and the 78-year-old Clement XII. Between 1670 and 1730, the average pope was elected at 71 and served until 80, an average tenure of nine years.

The Catholic Church then shifted back toward picking younger popes. Beginning with Benedict XIV in 1740, the next 14 popes were all between 54 and 68 at the time of their election. The improvements in life expectancy held, however, so they served considerably longer than their predecessors: an average of 15 years.

The average age of popes elected since 1958 has been varied: there was the 76-year-old John XXIII, the 76-year-old Francis and the 78-year-old Benedict XVI on the one hand, and the 58-year-old John Paul II, the 65-year-old John Paul I and the 65-year-old Paul VI on the other. But the average age has been 70, more in line with the 17th-century precedent. The length of their papacies has also been highly varied, but they have served for an average of 11 years and a median of 7, also somewhat closer to historical norms.

The other reason the cardinal electors might have seen Francis’ age as an asset is because the cardinals are also quite old: 72 on average. (Cardinals must be younger than 80 to participate in the papal conclave.) If Francis serves for 5 to 10 years, a considerable number of the cardinals will have another opportunity to steer the course of the church by voting again on a pope, something that would have been much less likely had they selected a candidate in his 50s or 60s.

What about the risk to the cardinals that Francis, already 76, could serve past an age when he is mentally and physically fit – with their having no way to remove him from the papacy? It is possible that the resignation of Benedict XVI, the first since Gregory XII in 1415, actually alleviated that concern, because there is now a modern precedent for popes resigning because of their advanced age. In other words, it is plausible that the resignation of Benedict XVI — which conventional wisdom held might tilt the cardinals toward electing a younger pope — in fact enabled them to choose an older one.