Cherry Jones, the two-time Tony winner and veteran Broadway actress, hasn’t been to all 14 opening nights that Broadway played host to this month, but she estimates she’s attended “oh, maybe 12.”

Like many others in the New York theater world, she’s been busy for the two months leading up to Tuesday morning’s Tony nominations. Eighteen shows opened in March and April, with two opening on the same day last week.

There appears to be a reason that so many shows open in such a short period: Historically, a higher percentage of shows that open in March and April have won at least one Tony Award, and those prizes generally have a positive effect on the financial success and longevity of a show.1 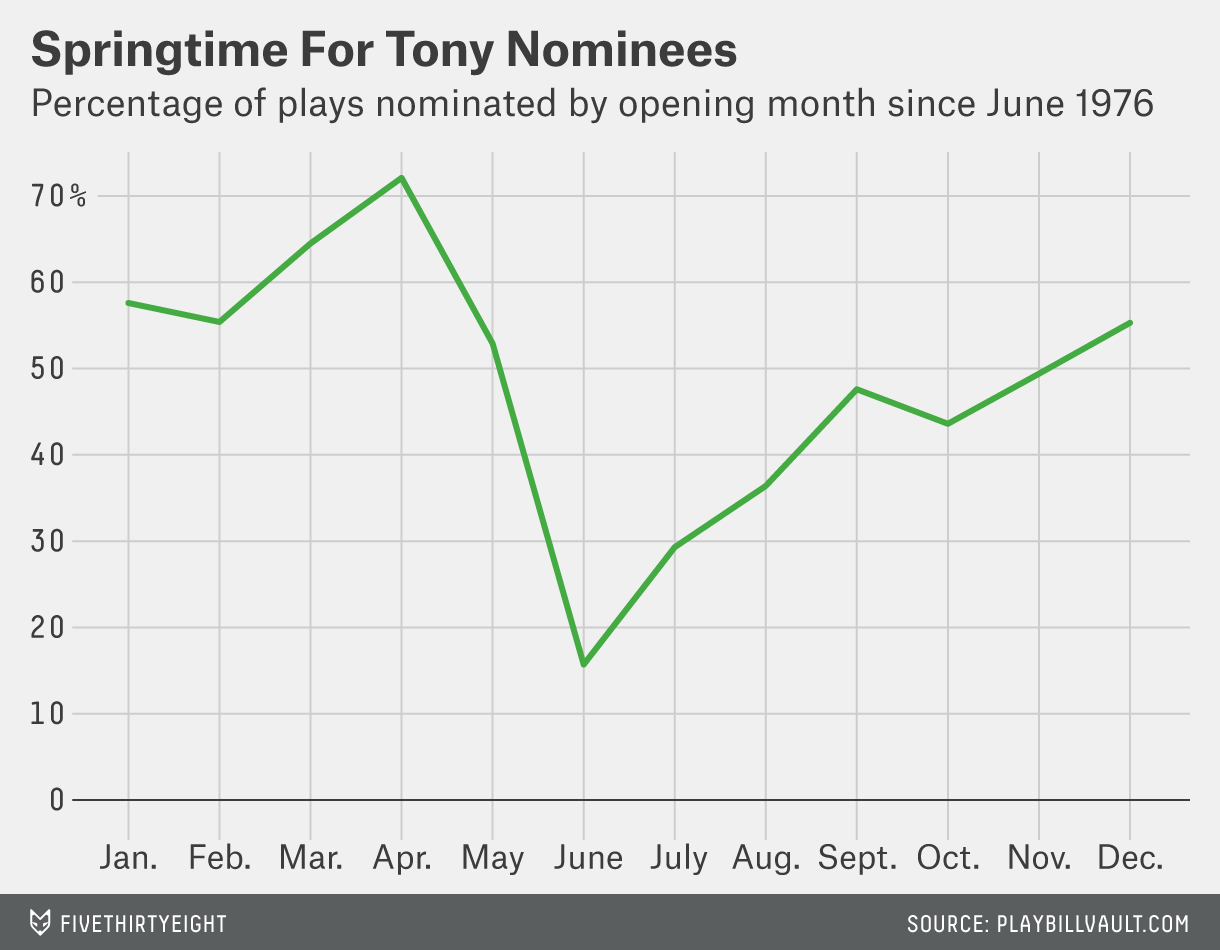 When a show opens may not be the sole deciding factor for how it will fare during awards season, but some producers believe it plays a part. The designated group of Tony nominators (currently 50 people) must see every show and choose their favorites for each category around the last week of April, a time frame that has been the fairly steady since the mid-seventies. Opening a show close to when nominations occur helps the show (good or bad) be a little less forgettable.

“It would be better to have that big opening a few weeks before the nomination than a few months, and certainly more than six or seven months,” said Elliott Masie, one of the producers of “An American in Paris,” which opened on April 12. If a show has been running for a while and not selling many seats, he said, that could have a negative effect on Tony nominators and voters.

But there’s also a trade-off to opening in the spring, and Ken Davenport, a Tony voter and most recently a producer of “It’s Only a Play” and “The Visit,” says he’s started to see a backlash.

“When more shows open in the spring, the competition is so severe that shows can end up grossing much, much less, especially if they don’t have big stars or they’re not coming in with a lot of steam,” Davenport said. “They can do really poorly and then close much faster as a result, because they can’t compete.”

And the competition has become more fierce in the last few years. While the number of shows playing on Broadway during the spring has stayed fairly consistent — there are currently 35 open shows — the number of openings in the two months leading up to the Tony nominations has gone from an average of 15 shows between 1996 and 2008 up to 19 shows from 2009 to present.

The sheer volume of new shows can make decisions difficult for Tony nominators, voters and theater critics. Davenport, who saw three shows last week and at least 10 this month, said that at this time of the year, show fatigue can set in.

Ultimately, though, scheduling a show often depends on what theaters are available, what else is playing and the schedules of the actors and creative team. This often means that individual shows don’t have much of a say in when their show opens, particularly as existing shows, like “The Phantom of the Opera” and “The Lion King,” run for longer and the number of empty theaters declines.

How opening dates will affect this year’s Tony winners will remain a mystery until the Tony Awards on June 7. As for the nominees, the trend continues: 14 out of 20 shows opening this spring (January to May) were nominated for at least one Tony Award (83 total nominations) while only 8 out of 15 shows that opened in the fall (June to December) got a nod (24 total nominations). But until the awards are given out, there are a lot of shows to catch up on.

Joanna Kao is a multimedia reporter with an interest in theater.