Despite beating Syracuse 38-20 Saturday, the (formerly) No. 1 ranked Florida State Seminoles found themselves ranked second in the latest AP Poll, trailing Mississippi State after the Bulldogs beat previous No. 2 Auburn 38-23 at home in Starkville. It was the first time Florida State had not occupied the AP’s top slot since Nov. 24 of last season.

Although Mississippi State’s victory over Auburn was impressive, the way the polls typically work is that No. 1 stays No. 1 as long as No. 1 keeps winning (or soundly beats an underdog opponent). Florida State was favored by 23 against Syracuse and won by 18 in a game that was essentially over midway through the third quarter. The Seminoles are also the defending national champions, and so far this season they’ve outscored opponents by more than 18 points per game (a number that becomes nearly 21 if we throw out their six-point win over Clemson in which they were missing 2013 Heisman Trophy-winning quarterback Jameis Winston). If Florida State is presumed to be the nation’s best team — as it was before the season — it’s hard to find a obvious misstep that proves otherwise. (If anything, a good Bayesian should probably be more suspicious of Mississippi State, which was unranked as recently as five weeks ago.)

Then again, the Seminoles have also played just one team (Clemson) ranked among the AP’s Top 25 at the time of the game, and their overall strength of schedule ranks 64th in the FBS, according to Sports-Reference.com’s Simple Rating System. While my Elo variant still has them ranked first, it draws heavily from knowledge of how good they were last season. Computer-rating systems that don’t account for Florida State’s presumed strength as a prior, by contrast, tend to rank it among the country’s best teams — but generally not as No. 1. (That honor is more often bestowed upon either Mississippi State or Ole Miss, who very nearly bumped Florida State to No. 3 in the AP voting.) Combined with potential distaste over the sexual assault allegation against Winston, AP voters had several reasons to drop the Seminoles from their perch atop the rankings, despite the team’s 22-game winning streak and championship incumbency.

How frequently do No. 1 ranked teams fall in the AP Poll despite winning their most recent game? According to Sports-Reference’s college football data, there have been 21 cases (since 1992) of the AP’s top team beating an FBS opponent but dropping in the next poll (ratings and expected margins shown below are based on the Elo rating variant I described in an earlier post): 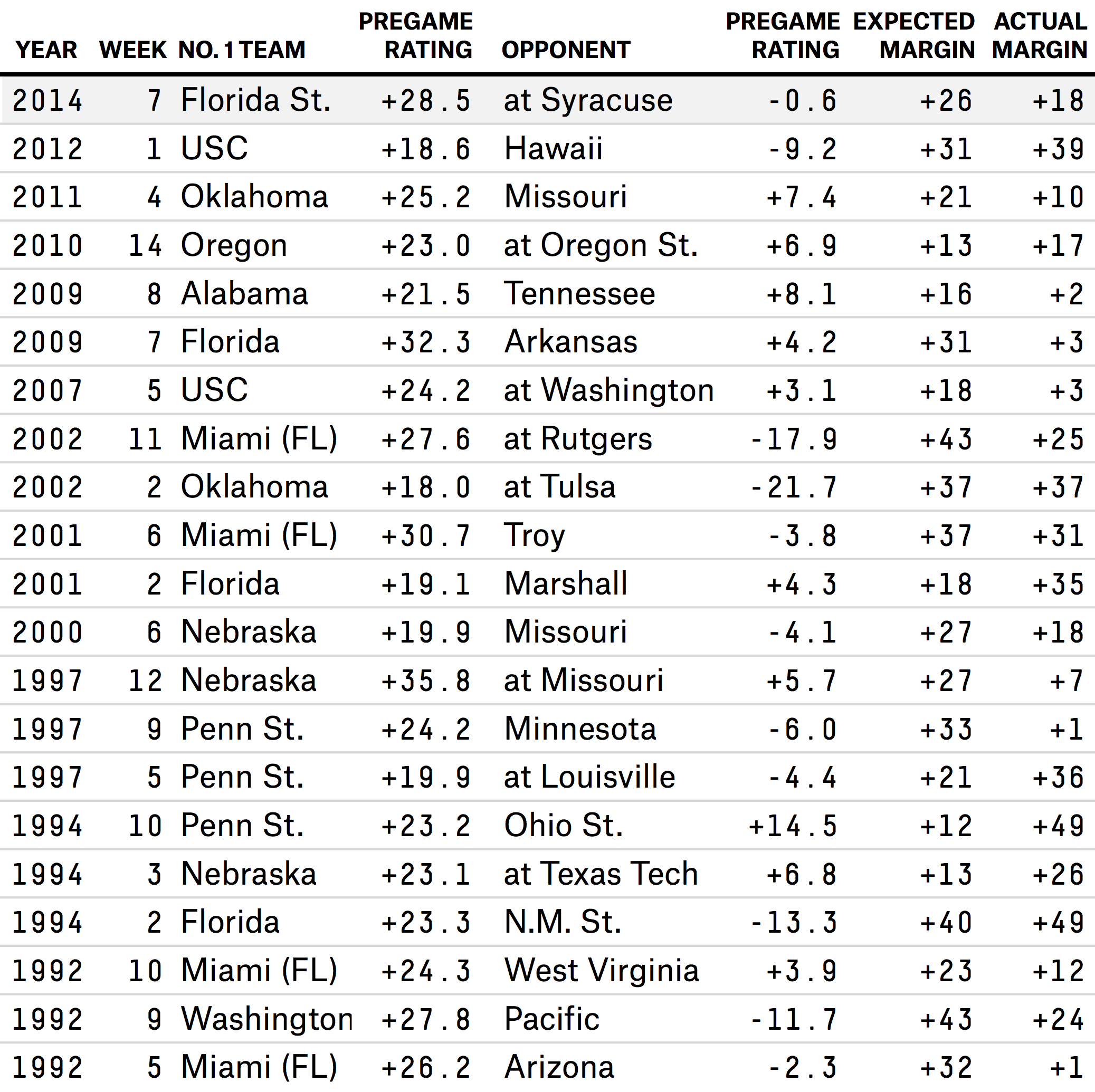 Compare the incumbents’ performances to those of the overtaking teams that claimed No. 1 in the subsequent AP poll: 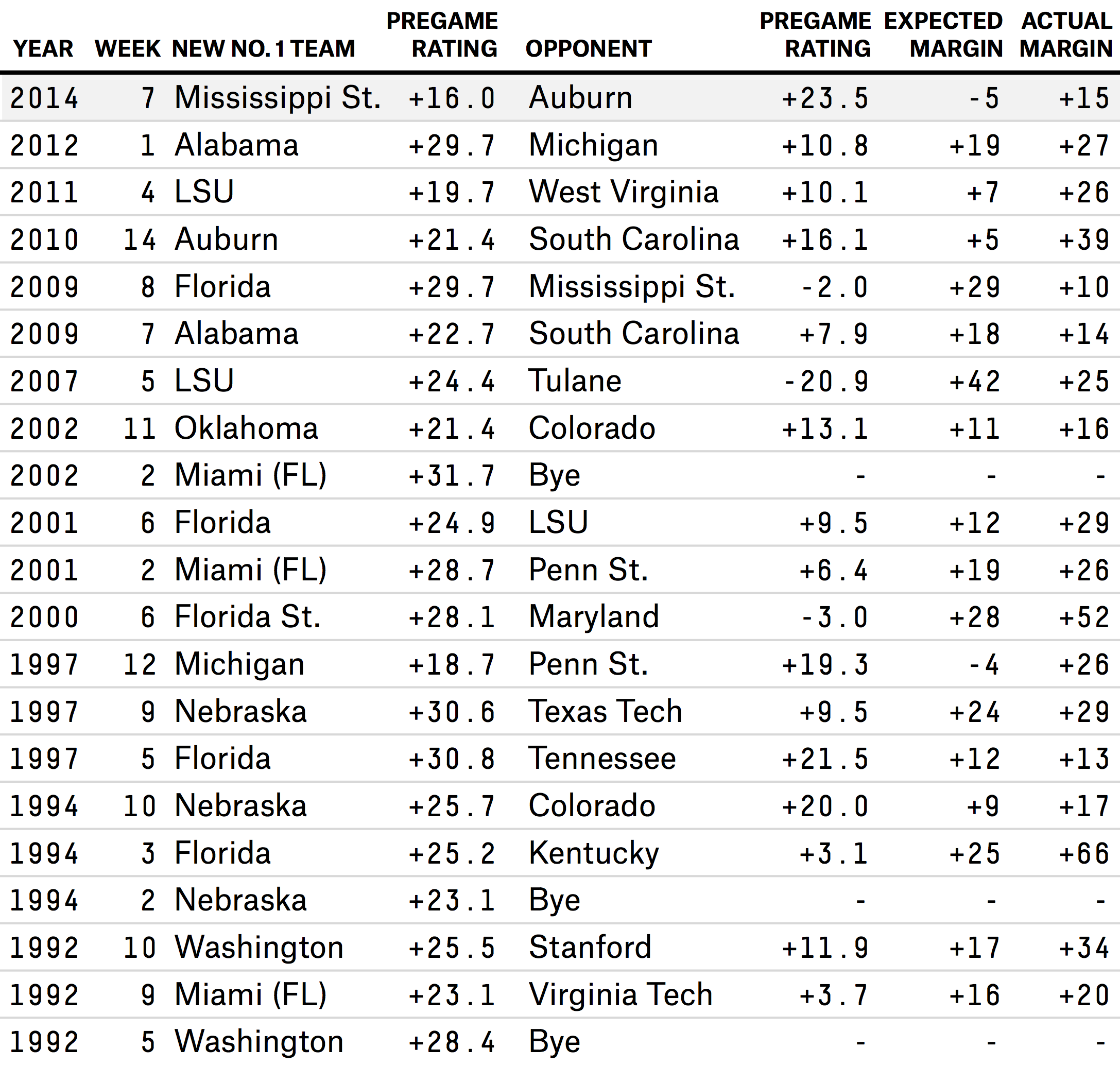 There are a few circumstances that can lead to No. 1 winning a game but losing its ranking, usually involving some combination of the incumbent disappointing and/or the upstart exceeding expectations. Florida State’s tumble was more an example of the latter than the former — the Seminoles underwhelmed by a bit, but the bigger factor was Mississippi State’s strong performance against Auburn.

Most of the cases above involve a similar chain of events, although a few saw the incumbent disappoint by so great a margin that No. 2 slid up just by playing to expectations. On other occasions, the challenger moved up without even playing; in 1992, No. 2 Washington watched on the sidelines as No. 1 Miami struggled to an 8-7 win over unranked Arizona, then claimed the AP’s top spot three days later. (The Hurricanes and Huskies would flip-flop the No. 1 slot twice more — each time in spite of incumbent wins — before the season was over.) And sometimes the pollsters swapped teams at the top for relatively arbitrary reasons, such as when Penn State crushed No. 21 Ohio State 63-14 — yet dropped behind Nebraska, who’d beaten previous No. 2 Colorado 24-7. (Despite going undefeated the rest of the season, the Nittany Lions would never again stake their claim to No. 1 over Nebraska from that point on, and were unable to face the Huskers in the postseason because of the Rose Bowl’s conference tie-ins.)

The good news for Florida State is that it still has the highest probabilities of winning out and winning its conference among the major-conference undefeateds, according to ESPN’s Football Power Index simulations. Barring the real possibility of a change to Winston’s availability — on top of the sexual assault allegations, news broke Monday night that Florida State was investigating whether the quarterback signed autographs for money — the numbers show the Seminoles as very likely to earn a berth into the inaugural College Football Playoff field, regardless of Sunday’s ranking loss.