You’re sitting on a flight, in a long queue of airplanes, waiting to take off. You were supposed to have left 30 minutes ago. The pilot comes on the loudspeaker to say your plane is next in line for takeoff, and tells you not to worry, because the plane can make up the lost time in the air.

I’ve always been skeptical of this claim, so I decided to check to see if this really happens: Do pilots put the pedal to the metal when their flights are delayed, even if the strategy is more costly because it uses more fuel?

To my surprise, I discovered that pilots do try to make up time in the air, but only for delays that fall into a particular sweet spot.

The Bureau of Transportation Statistics keeps detailed records of all domestic flights. I pulled the data for 2013 and focused on transcontinental routes served by at least five major airlines. Six routes fit this criterion: New York (JFK) to Los Angeles (LAX), Boston (BOS) to Los Angeles (LAX), New York (JFK) to San Francisco (SFO), and the reverse routes. All are served by American, Delta, JetBlue, United and Virgin America.

For each flight, I defined “delayed departure” the way you might expect — as the time between the scheduled departure time listed on the boarding pass and the time the plane left the runway, or its “wheels-up” time. I then calculated each route’s “flight time,” which I defined as the time between the wheels-up time and the plane’s arrival at the destination gate. On-time flights on these routes see an average flight time of about 344 minutes, or 5 hours and 44 minutes.1 If pilots can make up time in the air, the average flight time should be shorter for longer delayed departures.

And indeed, this is what we observe in the data — sometimes, anyway. When a flight is delayed by less than 30 minutes, it consistently takes between 340 and 350 minutes to travel between the East and West Coasts. But when the delay is longer — between 35 and 50 minutes — the flight time between coasts drops. Then, it only takes 320 to 330 minutes. The flight time reverts back toward six hours when the delay exceeds 50 minutes. 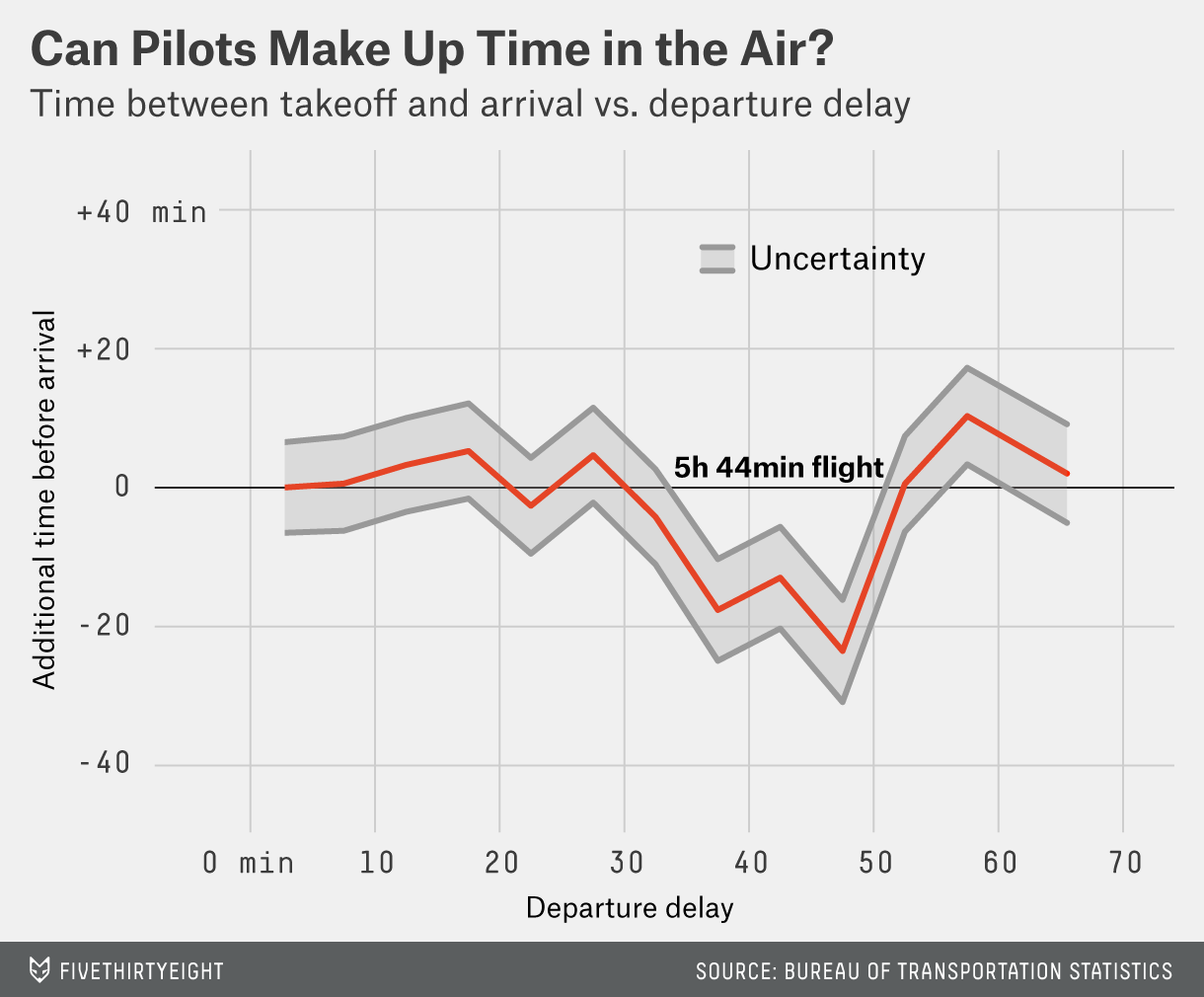 That means if your plane takes off 35 to 50 minutes after its scheduled departure, you can expect to make up about 20 minutes of that time in the air. But if the delay is any longer than 50 minutes, you shouldn’t get your hopes up. I suspect the pilots are more willing to press the accelerator, and consequently accept the higher fuel costs, if they believe there’s a good chance they can still get to their destination on time. (I ran the numbers across airlines, to see whether JetBlue pilots were behaving any differently than American pilots, for example, and didn’t find any statistically significant differences.)

Interestingly, the BTS defines a delay as arriving late at the destination, not leaving after the scheduled departure, as I’ve defined it — so the airline has an incentive to get to the destination on time. Once the window for a plausible on-time arrival passes, however, so does your chance of a shorter flight.

Which airline is the worst offender when it comes to longer-than-50-minute delays for these transcontinental routes? My results are summarized in the table below, which shows the share of flights by length of delay for each carrier.

As you can see, nearly 18 percent of all JetBlue flights left the ground at least 50 minutes after their scheduled departure time. On the other hand, Delta was the least likely to keep you waiting for 50 minutes or more. Still, about 11 percent of Delta flights had such a delay. And compared to the other airlines, Delta had the greatest share of medium-length delays, or delays ranging from 20 to 50 minutes.

Often, what delayed passengers care about is not how long they spend in the air, but how long it actually takes them to get to their destination. To check whether delays translated into a difference in total travel time, I analyzed each of the six flights, defining “total travel time” as the time between the scheduled departure and the actual arrival. I then found the average total travel time for each airline across all routes.2 I weighted the routes by number of flights for each airline, so if one airline had more flights on the longer Boston-to-Los Angeles route, that shouldn’t have affected the results.

The average total travel time for all flights across these routes was 354.7 minutes, or just shy of 5 hours and 55 minutes. Delta’s relatively many 20- to 50-minute delays and JetBlue’s delays stretching beyond 50 minutes meant that these two airlines had longer total travel times compared to the other carriers. American Airlines had the best travel time, averaging 5 hours and 48 minutes; on a typical flight on a typical day, American will get you across the country 13 minutes faster than JetBlue. Coming in at second-fastest was Virgin America, whose airplanes traveled across the country in 5 hours and 53 minutes.

So while pilots on any carrier might make up some of your total travel time in the air if you’re delayed, they won’t catch up to the American or Virgin America flights that left on time in the first place.

Correction (April 24, 12:15 p.m.): An earlier version of this article misstated the share of Virgin America flights that left the ground within 20 minutes of scheduled departure as 68 percent, when it was 59 percent. The article also incorrectly said that JetBlue had the lowest share of flights leaving within 20 minutes of scheduled departure, when in fact Delta had the lowest share. The data in the table was and is correct.

Benjamin Montet is a Ph.D. candidate in astrophysics at the California Institute of Technology. He also writes about the latest in astronomy at Astrobites. @benmontet