First, welcome to my first post on FiveThirtyEight. Nate has asked me to contribute a weekly column on the economy which I will start doing on Sundays or Mondays. I thought it would be a good idea to let you know what I see going ahead for the economy, so I am revisiting an article I wrote on August 31 called the Fits and Starts Expansion. In short, I see a very slow growth period ahead, with growth coming in between 1% and 2% for 2010. Growth will come from several areas, but no one area will dominate — hence the title “Fits and Starts”.

My original article identified five sources for growth in 2010. These areas were consumer spending, inventory adjustments, stimulus spending, Asian consumers/exports and manufacturing as the five areas that would provide growth. I am going to update these ideas in the paragraphs that follow.

The two paragraphs that follow were from the original article. I still believe in the fundamental analysis presented therein. I have added additional points in brackets with the text emboldened.

The general opinion of the US consumer is that he will change his overall behavior from one of spending to one of savings and frugality. This in fact has already occurred to an extreme degree. There are several reasons for this. Unemployment is high and will remain at that level for the foreseeable future. When a person does not think he will be able to find a job if he losses his current job than he will spend less today. In addition, household debt is at very high levels and the consumer — who has been paying down debt and shunning new debt — will continue to do so [this trend has continued. Total household debt outstanding is decreasing and the household financial obligations ratio continues to decrease]. This will lead to an increase in savings which will lower consumption.

However, there has been an underlying assumption to this argument that the US consumer will stop buying to such a degree as to be a non-factor in GDP. In other words, the consumer will move from a position of being a fundamental driver of US growth to having little to no impact. That is a radical view — and one I believe to be incorrect for two reasons. First, from a practical side things wear out and need to be replaced. The US consumer cannot eliminate the need to replace things. In addition, as the consumer holds onto goods longer, other items need to be purchased — replacement parts and the services to fix items. In addition, the economy will not always be in its current position; at some point the unemployment rate will return to manageable levels, salaries will increase and asset valuations will be stable. When this occurs the consumer will feel more confident and will be more willing to spend on goods and services. However, the old consumer — the one who spent wildly on everything — will not return.

Nothing has changed in my opinion of the consumer since writing the preceding paragraphs. Consider the following two graphs that illustrate the points: 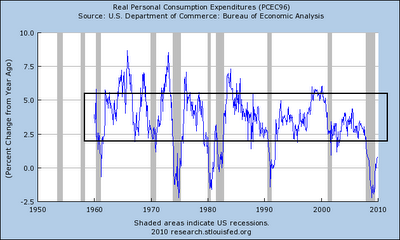 Above is a chart of the year over year percentage change in personal consumption expenditures. Notice that since 1960 these have found a sweet spot between -2.5% and 5%. This is the rate of growth we are use to. However, there is nothing written that says the number could not gravitate between ~0% and 2% instead. That would still give the economy some momentum, simply not as much as before.

In addition, consider this chart: 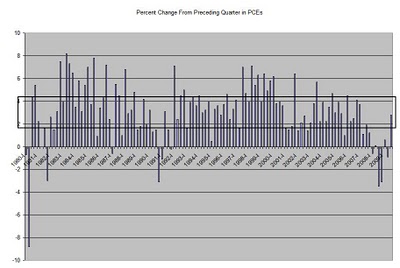 Above is a chart of the quarter to quarter percentage change in PCEs starting in the 1Q80. Notice how these have found a comfort range in the ~2%-4% range for the vast majority of the time since 1Q80. However, suppose this number ranged between ~0% and 2%. This would be in line with slower growth and a more cautious consumer. While the latest number was 2.8% (3Q09) I would have no problem with the number ranging at a lower level.

The point to the preceding charts is simple: overall, the US is use to PCE growth at a fairly quick pace. Yet there is nothing suggesting that number couldn’t slow down yet still remain positive. A slower pace of growth would be consistent with a more cautious and value oriented consumer.

Finally, consider this chart of real month over month PCE’s: 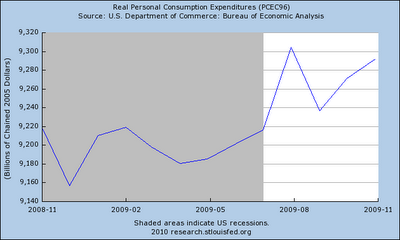 Notice the real PCEs are clearly in an uptrend.

Over the great recession inventories have contracted at a very fast pace. Consider the following chart of total inventories: 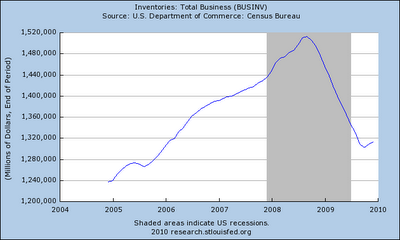 Note the large drop from (roughly) mid-2008 to mid-2009. However, as the chart also shows, this drop has stopped over the last few months and begun creeping upward. In addition, 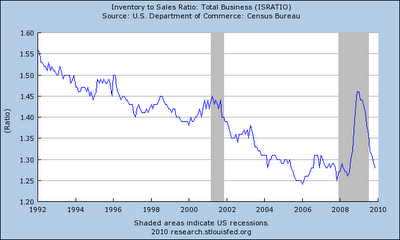 The sales/inventory ratio is back at pre-recession levels. This indicates that inventories are incredibly lean and have to be added to. The increase in inventories for a variety of business interests started in the fall:

Business inventories rose 0.4 percent in November, the same rate of build posted in October (plus 0.2 percent initially reported). November and October mark the cycle pivot and apparent end to the inventory correction. The pivot has been led by wholesalers where inventories jumped 1.5 percent together with a 0.6 percent rise in October and vs. a long prior string of big draws.

Inventories of manufacturers show the same pivot to a lesser degree, up 0.2 percent in November and up 0.6 percent in October. Retailers looked to have been the first to pivot, showing a build in September that however was followed by no change in October and now a 0.2 percent draw for November. But November’s retail draw was no doubt due to the month’s big jump in sales (data revised higher in this morning retail sales report). But weak retail sales for December, together with company reports that post-holiday inventories are extremely lean, point to the possibility of further draws, or at most very slight builds, in December and January.

I made the next two points in the earlier article:

Next year the real impact of the stimulus starts to hit. The CBO studied the Stimulus package and stated that:

Assuming enactment in mid-February, CBO estimates that the bill would increase outlays by $92 billion during the remaining several months of fiscal year 2009, by $225 billion in fiscal year 2010 (which begins on October 1), by $159 billion in 2011, and by a total of $604 billion over the 2009-2019 period. That spending includes outlays from discretionary appropriations in Division A of the bill and direct spending resulting from Division B.

The spending will occur over a variety of different governmental programs such as rural broadband development, homeland security, infrastructure, increases in unemployment benefits and a host of other programs.

In addition, there were tax provisions in the bill which would produce the following effects:

So, between actual spending and tax reductions, 2010 should see the direct impact of roughly $350 billion ($225 in spending and $131 in tax reduction). The real issue here is the multiplier effect — how much of a larger effect will the spending have. Frankly, we won’t know until the money is spent. But next year we’ll see the ripple effect of the combination of tax cuts and spending. This will help growth.

There’s a great myth that goes around the Internet: the US doesn’t make things anymore. If that were true, then we would have exported $1.8 trillion dollars of goods in 2008. And in 2008, we exported $108 billion of foods and beverages, $388 billion of industrial supplies, $457 billion of capital goods, $121 of automotive products and $161 billion of consumer goods. In other words, exports account for about 13% of GDP. And they may become far more important to US growth:

In the process of gorging on overseas goods and services, the US by happenstance fired up emerging economies such as China, Korea, Taiwan, India, Brazil and Mexico to build their productive capacities and spawn their own middle classes and consumer cultures. Paulsen has long called this trend the US’s “emerging-market Marshall Plan.”

As US consumer spending slows we will import less, thereby lowering the total amount of imports in the trade deficit formula. At the same time, Emerging economies have seen a growing middle class which will want to buy more goods and services. And some of those will come from the US.

Nothing has changed regarding stimulus spending; we are still on target to have some government money/help for the economy. I have seen people complain about this, arguing that government supported economic growth is invalid. To this point I offer the following rebuttals:

1.) Government spending accounts for at least 20% of economic growth during an expansion.
2.) Many of the people making this argument were also for the stimulus and in some cases argued the original stimulus was insufficient

In short, the US is in the middle of a standard, Keynsean style economic boost. This is exactly what is supposed to happen when the government spends money to increase overall demand.

Regarding exports, consider the following charts from Calculated Risk: 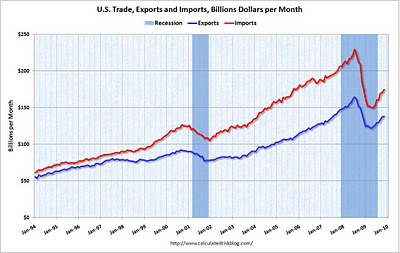 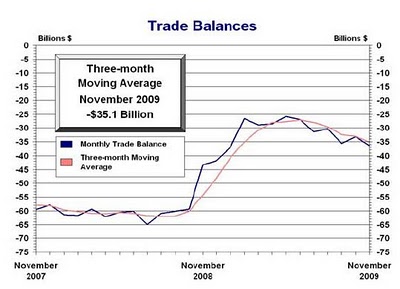 However, most of the increase is due to petroleum imports as seen in the red line below. 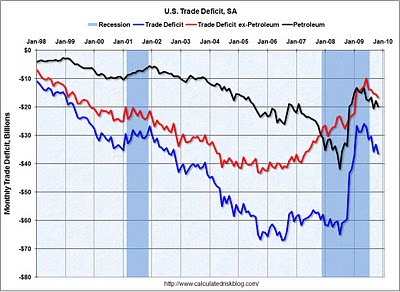 However, while the export story exists — that is, exports are increasing leading to a boost in US manufacturing — the US appears to be moving back into its position as a net importer primarily because of oil dependence. 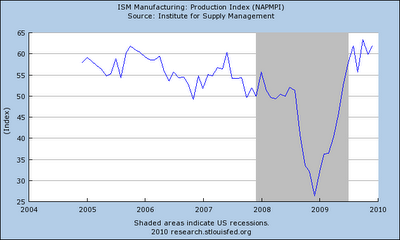 After hitting a multi-year low in late 2008, the index has been rising for most of 2009. This indicates manufacturing’s deep contraction was overdone (as SilverOz has noted on several occasions) and that manufacturing is coming back. This ties in with the inventory story mentioned above — as businesses restock inventories manufacturing will have to ramp up production.

As I wrote before, it’s important to remember where we are in the economic cycle. A year ago, GDP was dropping precipitously and we were bleeding jobs at a 600,000/month rate. I describe the initial phase of the next expansion the “fits and starts” expansion because not one of the elements outlined about will lead completely or continually. It’s far more likely we’ll see an increase in consumer spending one quarter followed by increased stimulus spending and an increase in exports the next quarter. In other words, various economic sectors will take the lead one quarter and then fall back. Although a return to growth can be expected, the road there may not always be smooth.