Conventional wisdom holds that the first presidential debate offers an especially good opportunity for the challenging candidate, who for the first time gets to stand on a literal public stage, and a proverbial level playing field, with the incumbent president.

As much as we like to debunk the conventional wisdom at FiveThirtyEight, this hypothesis has the ring of empirical truth to it. There are no guarantees for Mitt Romney, and if he makes gains in the polls following Wednesday night’s debate in Denver, they will probably be fairly modest. But if historical precedent is any guide, he is more likely than not to see his standing improve at least some.

This analysis will be quite simple: I’ve made a comparison of the polls just before and just after the presidential debate in years dating back to 1976.

There is a lot of detail in the table, but let me give you the numbers and then we can describe some of the more interesting bits. 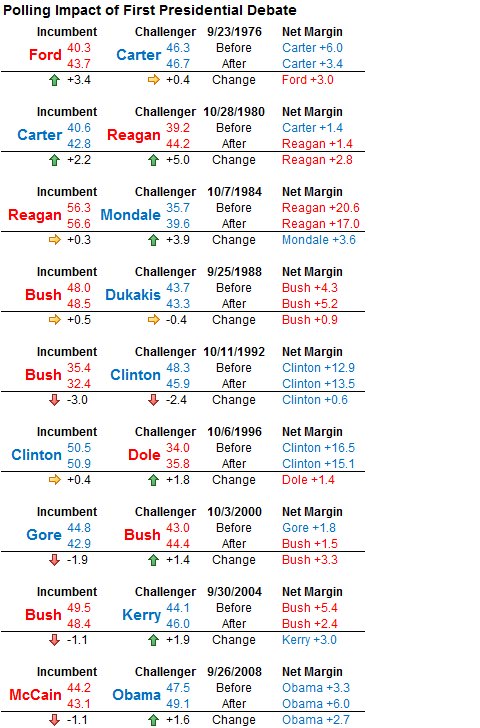 The first thing to notice is that the debates normally have a modest impact. The largest shift in the before-and-after numbers during this period came in 1984, when Walter Mondale gained a net of 3.6 percentage points on Ronald Reagan. Unfortunately for Mr. Mondale, he still trailed Mr. Reagan by 17 points, which was close to the margin he lost by on Election Day.

Several other debates produced a shift in the three-point range in one direction or another, and the average shift was 2.3 percentage points.

Second, there were two debates that reversed the leader in the race. Mr. Reagan, in 1980, moved ahead of Jimmy Carter following their first and only head-to-head debate on Oct. 28, and then he won overwhelmingly. In 2000, George W. Bush moved ahead of Al Gore in the polls after their first debate, and Mr. Bush won the election, although he lost the popular vote.

The third conclusion follows from this: The candidate ahead in the polls after the first debate always won the Electoral College during this period. I wouldn’t make too much of this: it’s not like Mr. Romney is going to be out of the running if he trails Barack Obama by one point in the polls a week from now. But it’s really getting quite late in the game once the first debate is held — so it will be one of his best, and last, opportunities.

Fourth — and I’ve already given away the cliffhanger — the first debate has normally helped the challenger. In the nine elections between 1976 and 2008, there were only two years when the incumbent-party candidate gained ground relative to the challenger; these cases were 1976, when Gerald R. Ford halved his six-point deficit with Jimmy Carter, and 1988, when George H.W. Bush moved just slightly further ahead of Michael Dukakis.

However, the challenger’s gains have come mainly from undecided voters rather than from the incumbent himself.

So a reasonable best guess, based on the historical precedent and without considering any factors specific to this race, is that Mr. Romney will gain a point or two in the polls by next week, while Mr. Obama’s number will hold steady.

There have been several years, particularly 1992 and 2000, when the incumbent-party candidate lost vote share, but this is balanced out by others in which the candidate made gains.

The tendency for the challenger’s numbers to improve has been more robust, however. The only year in which the challenger lost a material amount of ground was in 1992, an unusual case in which both Mr. Bush and Bill Clinton lost ground relative to H. Ross Perot.

But here’s the bad news for Mr. Romney: no candidate who trailed by as much he did heading into the first debate went on to win the election. In the two cases where the lead reversed after the debate, 1980 and 2000, the trailing candidate was down only one or two points in the polls. The FiveThirtyEight “now-cast,” conversely, pegs Mr. Romney’s deficit at about 5 points instead. (Other methods put it at between three and four points.)

More bad news for Mr. Romney: although there has been a tendency for the challenging candidate to gain ground immediately after the first debate, there has not been any tendency for the challenger to gain over the remaining weeks of the election. On average during these years, the challenging candidate trailed by 1.5 percentage points in polls conducted just after the first debate — and the challenger eventually lost the election, on average, by 1.4 percentage points, a nearly identical margin.

All of these conclusions are based on a small sample size, and so they ought to be interpreted with some caution. But two basic and common-sensical ideas ought to hold. First, the debate is an excellent opportunity for Mr. Romney: probably not to draw the race into a tie or take the lead, but at least to narrow his deficit. Second, if Mr. Romney does not take advantage of it, he will be in some trouble.