A clear favorite has been established in all but one of the 34 senate races on the ballot today. Although the Democrats remain in as strong a position in the aggregate as they have been all year, their odds of emerging with a 60-seat caucus now appear fairly long — no better than about 15 percent. 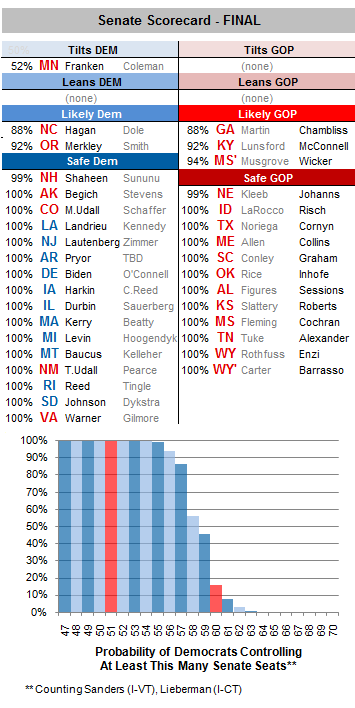 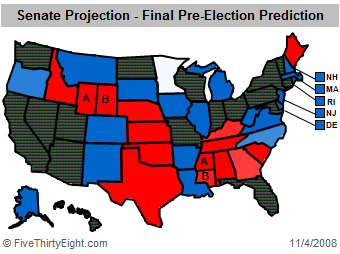 What movement there has been over the past few days has mostly been in North Carolina and Kentucky. In the former race, Elizabeth Dole’s “Godless” ad clearly seems to have backfired, and Kay Hagan has emerged with a 7-point lead in the latest polls from PPP and SurveyUSA. When coupled with the strong Democratic turnout in early voting, Dole will need a miracle to retain her seat.

In Kentucky, on the other hand, polls from Rasmussen and SurveyUSA suggest Mitch McConnell standing a safe enough distance away from the brink, with leads of 7 and and 8 points, respectively.

So that sets the following scene: Democrats will almost certainly pickup the Republican-held seats in Virginia, New Mexico, Alaska, Colorado and New Hampshire, although there is a remote upset possibility in the latter race, where Republicans were pleased with John Sununu’s performance in his debates against Jeanne Shaheen. North Carolina and Oregon are also likely to send freshman democrats to the Senate Chamber.

Finally, in Minnesota, we are no closer to a resolution than we have been all year, with new polls from the Star Tribune and SurveyUSA showing Al Franken and Norm Coleman in the lead, respectively. Minnesota may be the race to watch today, possibly even exceeding the presidential contest.