In 2018, Democrats took back the House thanks to a blue wave that ran right through America’s suburbs. Now the question is, can they hold onto that majority?

The answer is probably yes, as Democrats are clear favorites, according to the final version of FiveThirtyEight’s House forecast, which gives them a 97 in 100 chance of winning control of the House.1 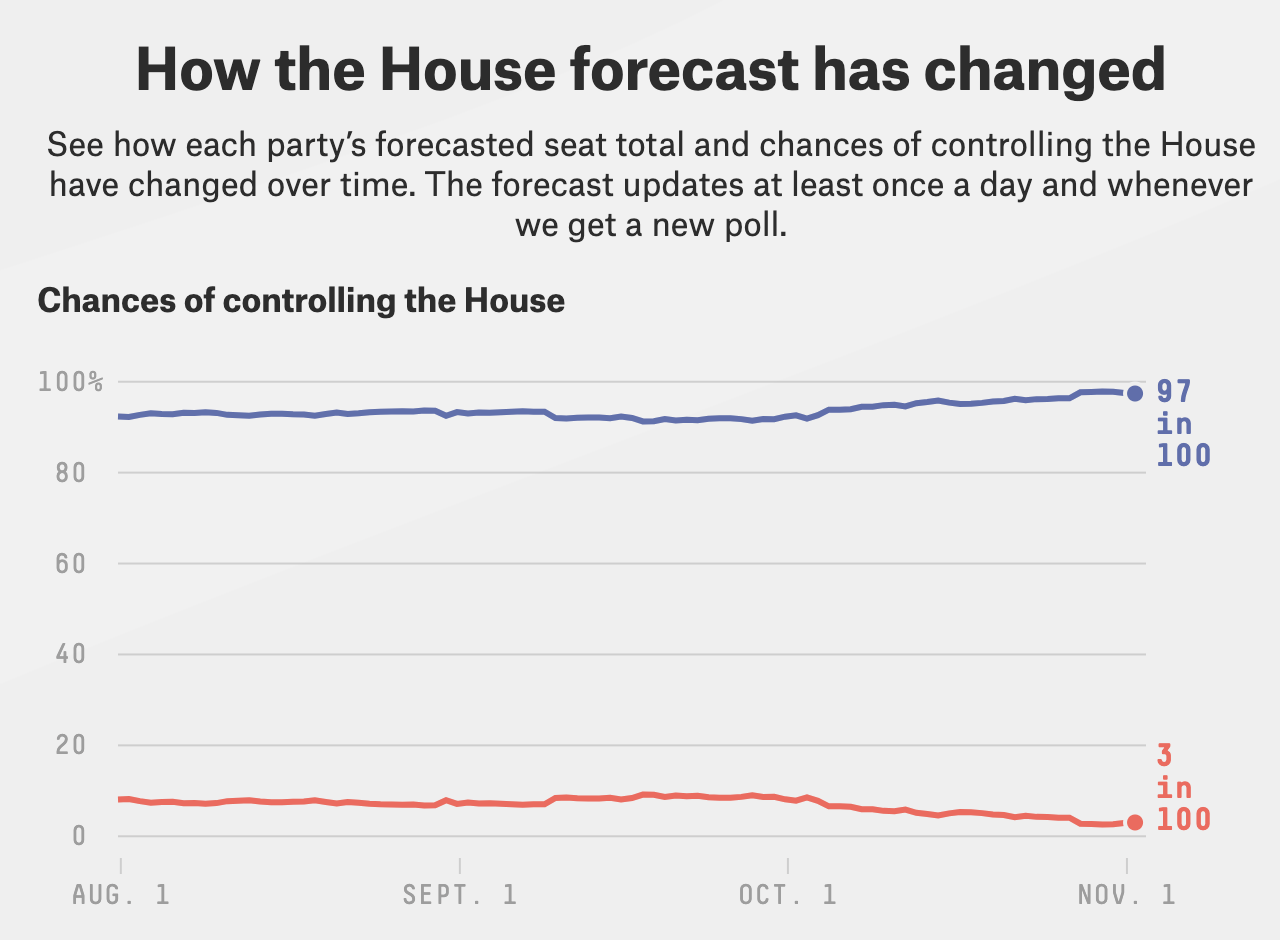 Overall, the House contest appears to have significantly less drama than either the race for the presidency or the Senate, both of which are far more competitive. Democrats currently control 233 seats to the GOP’s 201 seats,2 with retiring Libertarian Rep. Justin Amash the lone third-party member in the chamber. So to win back the House, Republicans need a net gain of 17 seats to achieve a majority of 218, which is one reason why their odds of taking back the chamber are so low (3 in 100). That’s a lot of House seats in a presidential cycle, as a party has only gained that many twice in the past 10 presidential elections.

Be Wary Of Exit Polls This Year (Well, And All Years) | FiveThirtyEight

But perhaps the even bigger reason why Democrats are favored to keep control of the House — as well as maybe win the White House and even the Senate — is that the electoral environment looks quite good for their party. If we look at the polling average from our congressional generic ballot tracker, which includes all polls that ask respondents whether they plan to vote for the Democrat or Republican in their local congressional race, Democrats lead by 7.3 percentage points. That margin speaks to a strong national environment for Democrats and isn’t that far off from the 8.7-point edge Democrats had heading into the 2018 midterm elections. And as the chart below shows, this lead hasn’t fluctuated much over the past year. 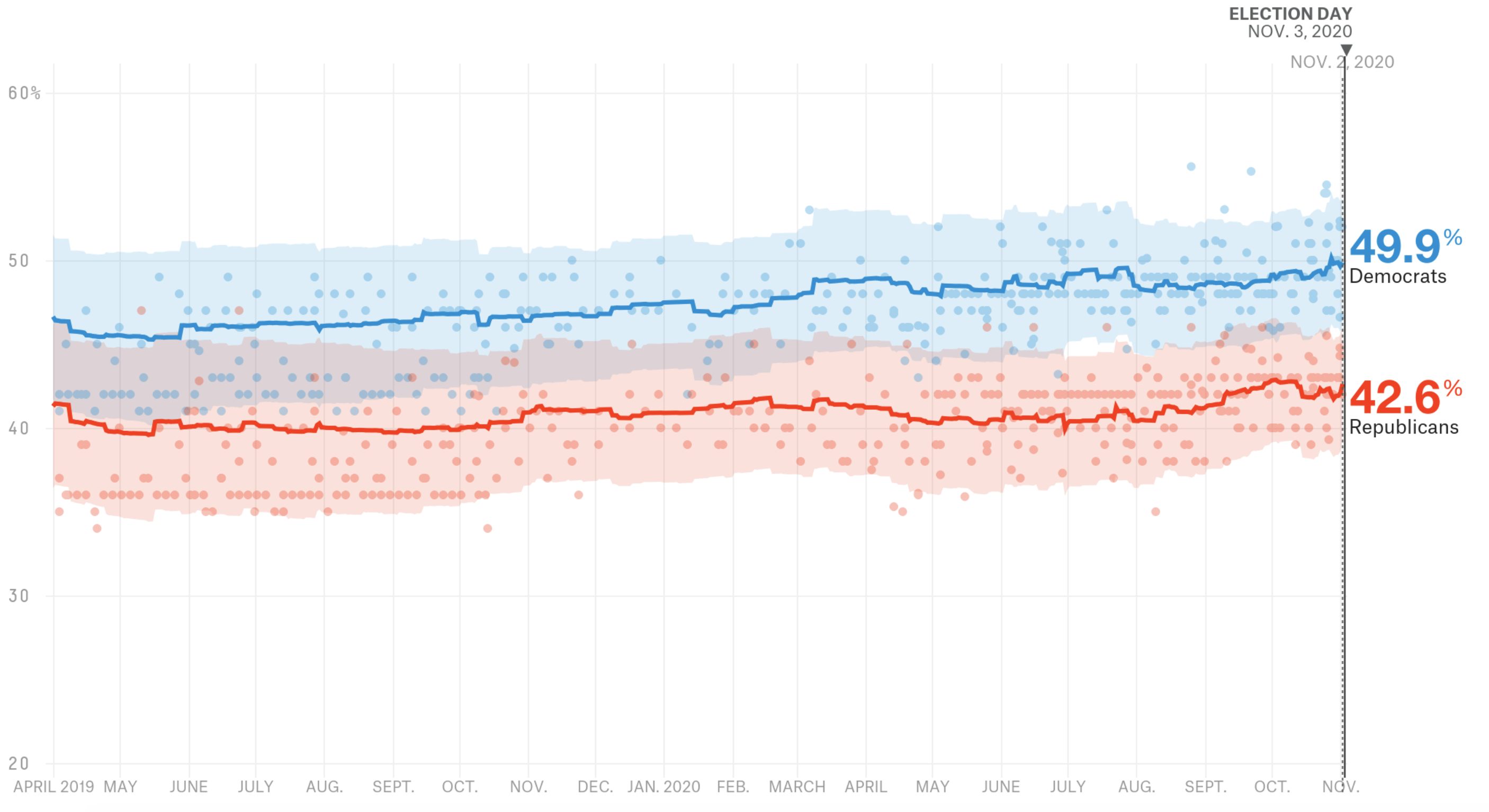 What this has meant practically is that the overall electoral environment has boosted the chances of House Democrats, but most notably it’s given a leg up to those who captured Republican seats in 2018 and are now seeking reelection. Of the 41 Democrats who flipped seats in 2018 — not counting one who resigned and another who switched parties — 30 have at least a 3 in 4 shot of holding onto their seat. This despite the fact that President Trump carried 20 of those 41 seats when he won in 2016. These conditions, along with strong Democratic fundraising and mediocre Republican candidate recruitment in many key races, have left a pretty short list of Democratic incumbents who are in serious danger of defeat, as the table below shows.

In other words, these seemingly more competitive seats are, for the most part, not necessarily that close, which limits the GOP’s path back to a majority. Nevertheless, a handful of Democratic incumbents are in jeopardy of losing. In fact, the most vulnerable incumbent from either party is Democratic Rep. Collin Peterson of Minnesota, who has about a 1 in 5 chance of winning reelection in a seat that Trump won by 31 points four years ago, according to Daily Kos Elections. Beyond Peterson, five other Democrats fall into the “toss-up” range in our forecast: Reps. Kendra Horn of Oklahoma, TJ Cox of California, Max Rose of New York, Xochitl Torres Small of New Mexico and Ben McAdams of Utah. Of that quintet, Cox is the outlier because he’s the only one running in a seat that is pretty Democratic-leaning at the presidential level — Trump lost it by 16 points in 2016 — whereas the others all hold seats Trump won by at least 7 points. But Cox’s seat is probably one of the better candidate recruitment situations for the GOP, as ex-Rep. David Valadao, who Cox defeated by less than 1 point in 2018, is back for a rematch.

Aside from the strength of their incumbents, Democrats have also benefited from the sheer number of Republican retirements this year. Not to mention, some GOP primary challenges that resulted in some incumbents losing renomination. Although the incumbency advantage is not nearly as strong as it once was, open seats tend to be harder for the incumbent party to retain, and the disproportionate number of Republican exits from the House has left some vulnerable turf for them to defend. As the table below shows, this means Republicans are defending almost all of the 17 open seats where neither party is a safe bet.

Lastly, Democrats are also in an enviable position because they stand to defeat some Republican incumbents in competitive contests, too. Whereas only 13 Democratic incumbents seeking reelection have less than a 3 in 4 chance of winning reelection, slightly more Republicans — 14 — are in the same position. Still, the one silver lining for Republicans is that none of their incumbents is a clear underdog, as the table below shows. So most of these races might be a bit of a reach for Democrats hoping to pad their margins.

GOP Rep. Mike Garcia, who won a special election earlier this year to fill a vacancy in California’s 25th Congressional District, heads into the election as the most at-risk Republican incumbent. But along with Garcia are four others in toss-up contests: Reps. Jeff Van Drew of New Jersey, Scott Perry of Pennsylvania, David Schweikert of Arizona and Don Bacon of Nebraska. Van Drew won as a Democrat in 2018 but switched parties after voting against impeaching Trump, probably thinking he’d have an easier time as a Republican in a district that backed Trump by about 5 points in 2016, but the race is super close and he’s been outraised by Democrat Amy Kennedy — yes, part of that Kennedy family. Bacon, meanwhile, is defending a seat that could also matter a great deal in the presidential race because Nebraska apportions one electoral vote to each of its congressional districts, and its 2nd Congressional District is somewhat more likely to vote for Biden than Trump.

Bottom line: Democrats have benefited from an overall Democratic-leaning national environment, in addition to a number of strong Democratic incumbents, a sizable number of competitive Republican-held open seats and some vulnerable GOP officeholders. There’s no fuzziness here in what our forecast says: Democrats are in a very strong position to maintain control of the House. We’ll see how it plays out once the votes are counted, but a Democratic hold would be one of the more unsurprising outcomes in this election.