The Obama administration on Wednesday evening announced new proposals to give more Americans access to paid family leave. Right now, the vast majority of workers don’t get paid if they take time off after the birth or adoption of a child. A significant minority don’t get any paid sick days either.

President Obama announced that he will use his executive authority to order federal agencies to offer employees six weeks of paid time off when they become parents. He will also ask Congress for money to help states offer paid leave and will push lawmakers to pass legislation requiring most private employers to offer paid sick time.

Right now, the United States offers far less paid leave than most other developed countries. The Family and Medical Leave Act, which was signed by President Bill Clinton in 1993, requires most employers to offer workers up to 12 weeks of unpaid time off, but many employees aren’t covered and even those who are often can’t afford to go so long without pay.

“At a time when all parents are working in more than 60 percent of households with children (up from just 40 percent in 1965), and 63 percent of women with children under the age of 5 participate in the labor force (compared with 31 percent in the early 1970s), one fact is resoundingly clear: The fundamental structure of our workplaces has simply not kept pace with the changing American family.”

In total, 61 percent of private-sector workers in the U.S. are offered at least some paid sick time by their employers, and just 12 percent are offered paid family leave, according to the Bureau of Labor Statistics. Access to paid time off varies widely by occupation, income and other factors. Large companies are much more likely to offer paid leave than small ones, for example, and workers who are in a union are more likely to get access than workers who aren’t. Nearly 25 percent of workers in the top 10 percent of private-sector earners get paid leave compared with just 4 percent of workers in the bottom 10 percent. There’s no significant group, however, where a majority of workers get paid family leave. 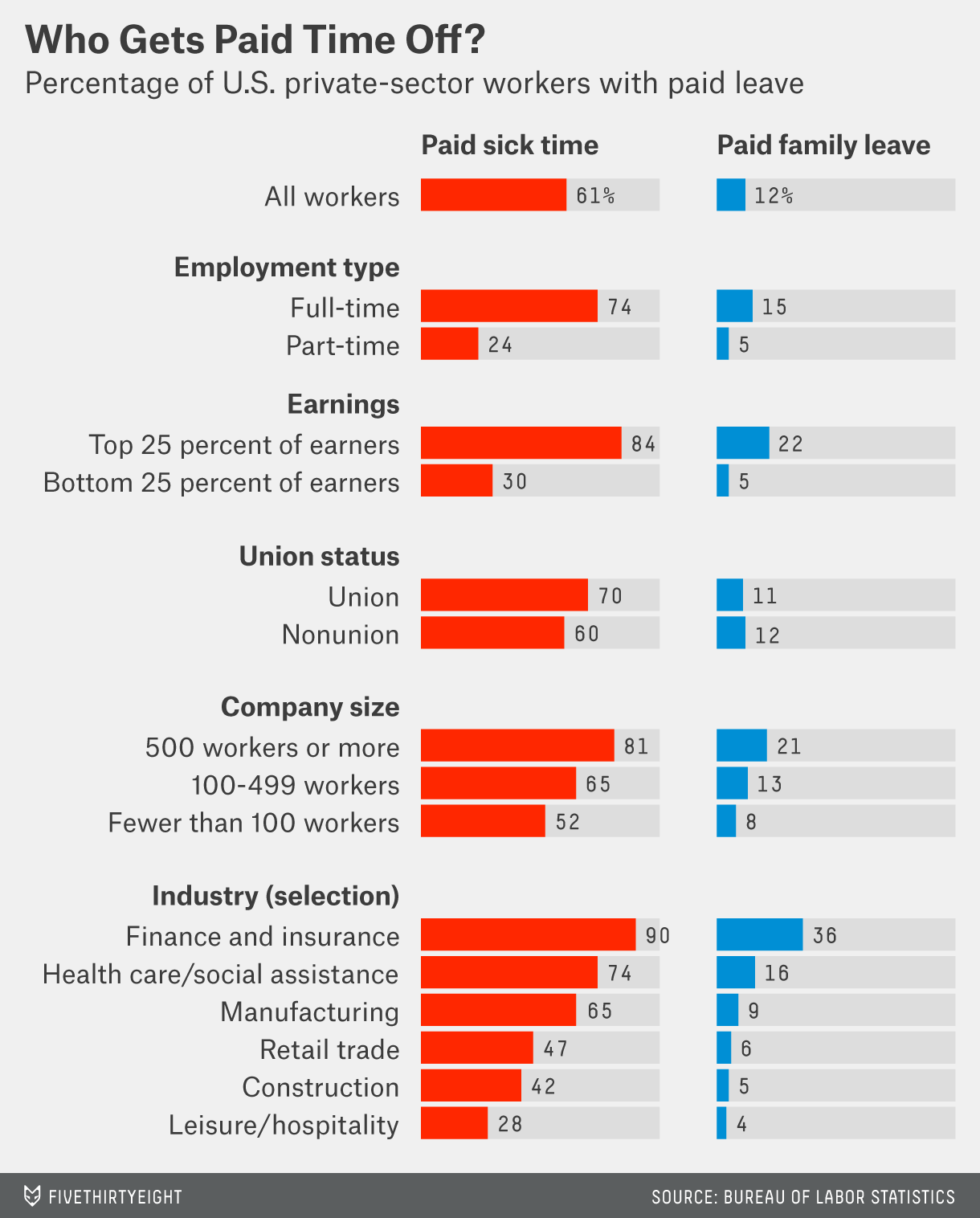 That said, efforts to expand access to paid leave appear to be gaining momentum. A growing list of cities and states have approved measures to require some form of paid leave for many workers. Overall access to paid time off has expanded significantly since the early 1990s, when just 2 percent of workers got paid family leave.