I hope you’ll excuse the hubristic headline. Constitutional amendments are introduced all the time in the Congress. Most of them are used to make a political point of one kind or another and stand little chance of becoming law.

On account of the trouble that certain Democratic governors had with making their senatorial appointments this year, however, a new amendment to be introduced by Wisconsin’s Russ Feingold may prove to be an exception:

Washington, D.C. – U.S. Senator Russ Feingold, Chairman of the Senate Judiciary Subcommittee on the Constitution, issued the following statement today on plans to introduce an amendment to the U.S. Constitution to end appointments to the Senate by state governors and require special elections in the event of a Senate seat vacancy.

“The controversies surrounding some of the recent gubernatorial appointments to vacant Senate seats make it painfully clear that such appointments are an anachronism that must end. In 1913, the Seventeenth Amendment to the Constitution gave the citizens of this country the power to finally elect their senators. They should have the same power in the case of unexpected mid term vacancies, so that the Senate is as responsive as possible to the will of the people. I plan to introduce a constitutional amendment this week to require special elections when a Senate seat is vacant, as the Constitution mandates for the House, and as my own state of Wisconsin already requires by statute. As the Chairman of the Constitution Subcommittee, I will hold a hearing on this important topic soon.”

We’ve been on this bandwagon for some time. Appointed senators rarely win re-election — perhaps because governors tend to do a poor job of choosing them, often choosing family members or cronies in lieu of people with superior qualifications, or using the appointment to advance their own well-being rather than that of their states or their parties. Vacancies in the House have long been chosen by special election; it’s odd that vacancies in the Senate have not been.

Constitutional amendments require passage by two-thirds of each chamber of Congress and then subsequently by majorities of three-quarters of state legislatures. This means, naturally, that they need to be seen as advancing sufficiently nonzerosum objectives (e.g. Good Government) that do not clearly advantage one party over another. Does this one qualify? I think probably so — but first a bit of context on how replacement senators are selected. 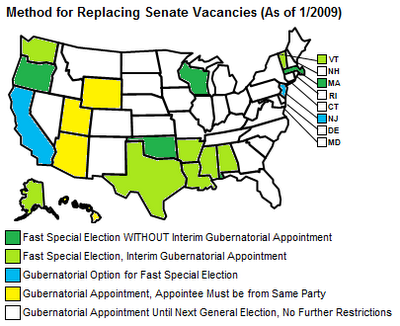 The four states that required replacement senators to be appointed this year — these are Colorado, Delaware, Illinois and New York — all did so by means of gubernatorial appointment as provided for under the 17th Amendment. The 17th Amendment, however, while providing for gubernatorial appointments, does not require them, and a number of states take a different approach. Twelve states call for “fast” special elections in the event of senatorial vacancies: these are Alaska, Alabama, Arkansas, Louisiana, Massachusetts, Mississippi, Oklahoma, Oregon, Texas, Vermont, Washington and Wisconsin. From among these states, eight allow interim gubernatorial appointments. Oregon, Wisconsin, Massachusetts and Oklahoma are the exceptions — the seat simply remains vacant in these states until the special election is held — although Oklahoma provides for gubernatorial appointments if the vacancy occurs after March 1st of an even-numbered year.

Beside these twelve states, two others (California and New Jersey) appear to provide for the option of a fast special election as determined by the governor — although frankly I can’t imagine these governors exercising their options unless under extreme political pressure.

The other form of restriction that some states place on gubernatorial appointments is that employed by Arizona, Hawaii, Utah and Wyoming. These states have some mechnaism for requiring that the appointed senator be from the same party as the departed one.

Now, then — excepting the minority of states that either require special elections or fix the party of the appointed senator — does either party stand to gain ground if the provision for gubernatorial appointment is removed?

Based on the present configuration of senators and governors, not really. There are now 14 Republican senators that could and presumably would be replaced by Democratic governors if they deceased or decided to resign from the Senate. The Republicans will be in a better position to hold these seats if the Feingold amendment is passed. These senators are: Grassley (IA), Brownback (KS), Roberts (KS), Bunning (KY), McConnell (KY), Collins (ME), Snowe (ME), Bond (MO), Burr (NC), Gregg (NH), Voinovich (OH), Specter (PA), Alexander (TN), and Corker (TN).

Likewise, there are 14 Democratic senators who would presumably be replaced by Republicans. The Democrats will be in a better position to hold these seats if the Feingold amendment is passed. These are Senators Boxer (CA), Feinstein (CA), Dodd (CT), Nelson (FL), Bayh (IN), Franken (MN), Klobuchar (MN), Conrad (ND), Dorgan (ND), Nelson (NE), Reid (NV), Reed (RI), Whitehouse (RI), Johnson (SD). (Joe Liberman (CT) would make 15, if you consider him to be a Democrat.)

So this happens to be a pretty good time to introduce this amendment — in the near term, it is not as though one party stands to gain or lose seats if it is enacted. Nor do I see an obvious arguments why one or another party stands to gain in the longer term, although I’m sure one can be constructed.

Are their other, ostensibly nonpartisan arguments against Feingold’s amendment? I suppose it will be objected that holding additional elections is expensive; Illinois officials estimated, for example, that the cost of appointing a special election to replace Barack Obama would be $31 million. But I don’t see how this argument is persuasive; $31 million translates into about the cost of buying a Big Mac for every Illinoisan, hardly a prohibative price for better government. Besdies which, if the cost were such a problem, why hold special elections for the House — or for that matter, any office at all?

So it seems to me that there is ample motive to enact this amendment: the disaster surrounding the appointment in Illinois and the melodrama over the one in New York. With neither party standing to be advantaged by it, there may also be ample means. And Feingold’s bill provides for the opportunity.