The Federal Reserve has given billions of dollars in recent years to the taxpayer. But that river of cash could be drying up.

A report released late last week said the Fed returned nearly $80 billion to the U.S. Treasury in 2013, down from about $88 billion in 2012. These remittances soared during the financial crisis for a simple reason: The Fed bought a lot of bonds, hoping to juice the economic recovery — primarily through an unconventional policy known as quantitative easing (QE). Those bonds generated interest, and after paying its operating costs, the Fed is required by law to send the rest back to the Treasury. It was just a byproduct that QE raised such huge sums for the Treasury; that was never the intention. 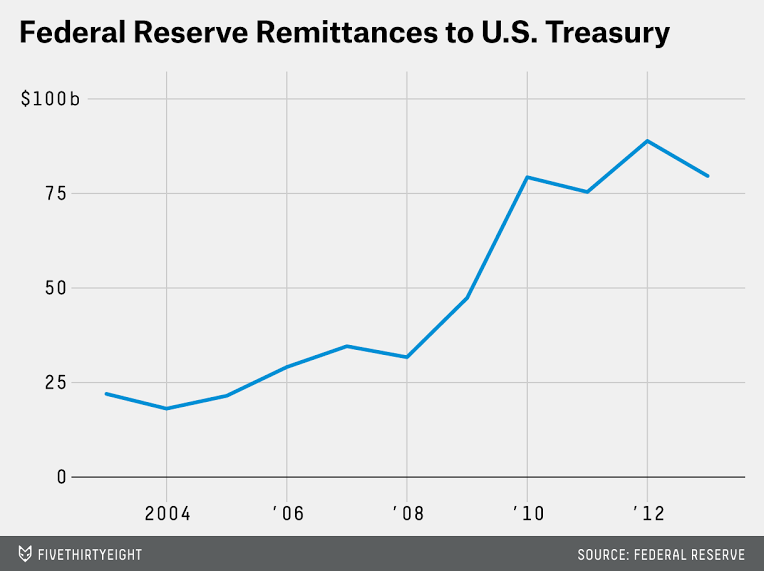 If the economy continues to improve, interest rates will rise, and the Fed’s multibillion dollar surpluses to the Treasury will probably fall, perhaps to zero. That’s because the Fed is keen on reducing the size of its balance sheet, either by allowing its asset holdings to mature or — if absolutely necessary — selling them outright. Fewer interest-earning assets mean less income for the Fed and, ultimately, the Treasury.

Furthermore, with rising interest rates, the rate paid by the Fed to banks for their reserve balances, currently at 0.25 percent, will rise, too. But the interest rate earned by the Fed’s assets won’t budge, further pinching remittances.