Beach season is over, the kids are back in school, and the two-month sprint to the finish has begun. A Pew survey released today shows that while the campaign accounted for 27% of the overall newshole during the summer low-attention season, it accounted for 69% of the newshole coverage spanning Denver’s Democratic National Convention through John McCain’s vice-presidential selection of Sarah Palin, crushing the previous high of 55% set during the week of Super Tuesday. 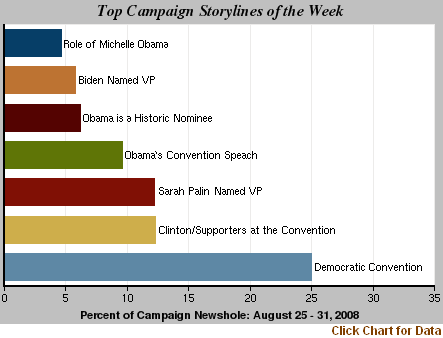 If nothing else, McCain’s willingness to roll the dice with Palin immediately changed the media focus in a way that would almost certainly not have been as intense had he picked someone expected like Tim Pawlenty, as most coverage centered on the risks and potential rewards of the pick. Pew’s study did not include the news of Palin’s daughter’s pregnancy, which broke the day after the survey period ended.

Campaign coverage accounted for 79% of network news airtime and 94% of cable coverage. Additionally, Pew finds that public opinion of both candidates has improved. Most significantly for Obama is the finding that he has impressed the Democratic base. The smooth Denver convention capped with a flawlessly executed final night led Democrats to report a greater satisfaction with Obama as the nominee, up from 39% to 54% reporting a “more favorable opinion” in the span of one week. Solidifying his more numerous base is really the ballgame for Obama.

By the same token, Republican views of John McCain became more favorable in that stretch by an even wider margin, improving 21 points to 53% “more favorable opinion,” up from 32%. This is undoubtedly good news for McCain, and shows that the pick of Palin was well received among Republicans (those Republicans who had heard “a lot” about the Palin pick split 36-24 more/less favorable toward McCain).

The problem McCain faces is that if Obama’s base solidifies, the numeric partisan ID advantage Democrats enjoy threatens to swamp his campaign. A tie in base favorability goes to Obama. That has always been Obama’s game. Solidify and turn out the base, keep his constant edge among independents, and McCain is essentially powerless to change the outcome.

As we go forward in the campaign, look for McCain’s camp to constantly push toward the middle. Attention is up, Obama’s base is solidifying, so trying to stop Obama from carrying independents is now McCain’s last, best hope. A National Journal survey of Republican convention insiders confirms an awareness that the swing voters are a much more important group for McCain to win. By a 55%-33% margin, GOP insiders urge McCain to go for the middle. Tomorrow night’s speech will tell us whether McCain understands this need.