Inequality is a hot topic these days — even on Fox News. This contrasts with most of the past decade, when the term was barely mentioned even on the liberal-leaning television network MSNBC.

The increasing focus on inequality is best thought of as a reemergence of an old theme rather than something new. Since the founding of the republic, frames focused around fairness and equality have competed against those centered around freedom and liberty in American political discourse.

I put together the following graphic (well, I put together the data; FiveThirtyEight visual journalist Ritchie King put together the graphic), based on a search for the terms equality, fairness, freedom and liberty* in the Democratic and Republican platforms dating to 1948. It tells us a lot about how the priorities of the parties have changed over the years. 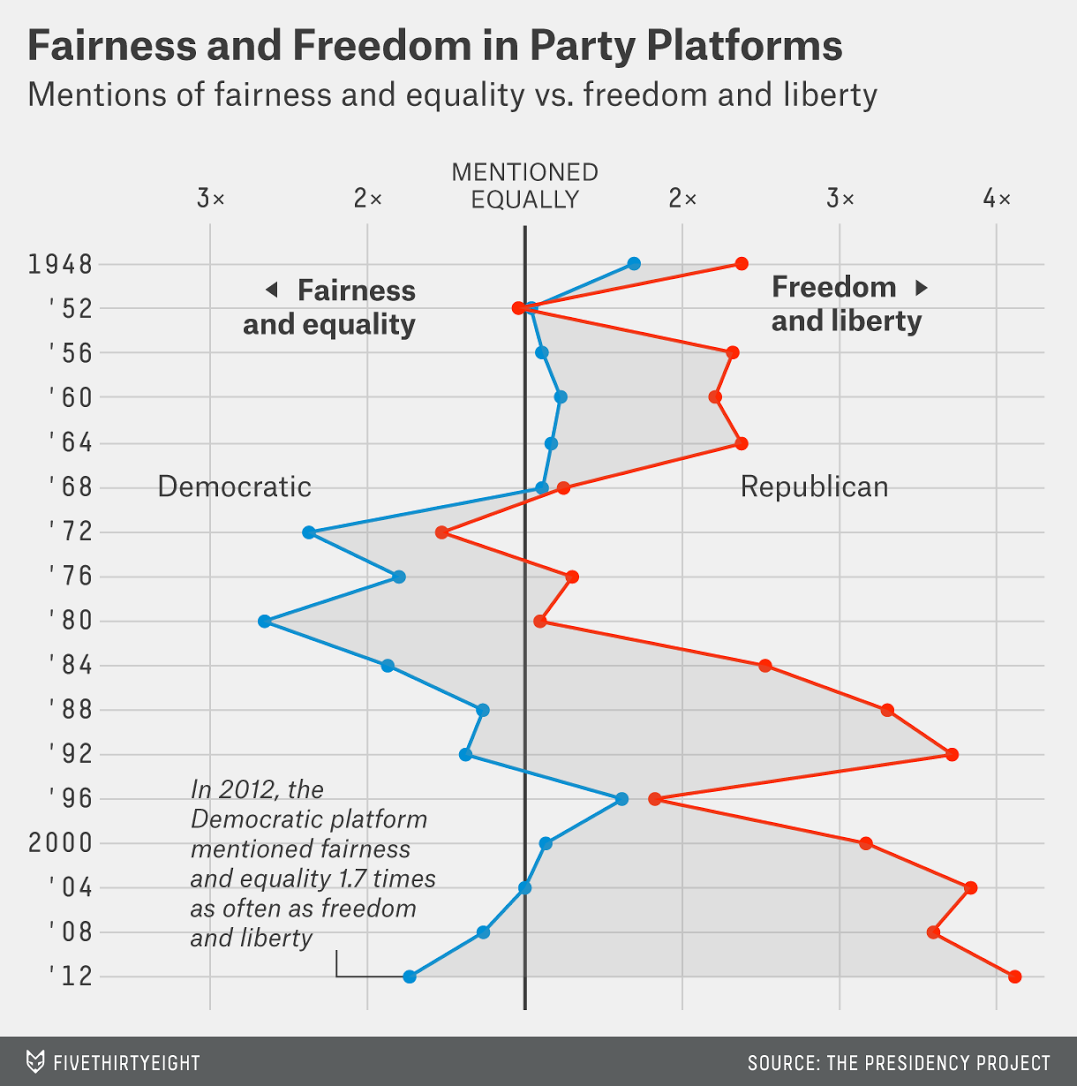 In the 1950s and 1960s, Democrats were about as likely to talk about fairness as freedom. Then there was a strong shift toward fairness and equality as rhetorical frames under George McGovern in 1972, Jimmy Carter in 1976 and 1980, and Walter Mondale in 1984. But Democrats reverted to being more even in their use of the terms under the platforms written for Michael Dukakis, Bill Clinton, Al Gore and John Kerry. Barack Obama’s platforms emphasized fairness and equality more often, however, especially in 2012.

Republicans have almost always used freedom-related words more than fairness-related words (with modest exceptions in 1952 under Dwight Eisenhower and 1972 under Richard Nixon). But from the 1950s through the 1990s, the parties usually tracked with each other. That is to say, when Democrats shifted toward talking more about fairness and less about freedom, Republicans moved in the same direction.

The usage of the terms can also be thought of as a proxy for where the parties align on on the left-right spectrum. Like other measures of partisan activity, this one shows that Republicans have shifted somewhat further away from the center and have therefore been somewhat more responsible for the increasing divide between the parties. However, Democrats have also been moving to the left.

In general, I’m in agreement with Thomas E. Mann and Norman Ornstein, that political commentators and journalists have been too slow to talk about the Republican Party’s rightward shift. It also seems plausible to me, however, that we could see an increasingly sharp shift toward the left in the Democratic Party in the coming years, particularly if Hillary Clinton is not its nominee in 2016.

Furthermore, it seems plausible that Republicans could gradually steer back toward the center; they’re talking more about inequality, too, both on cable television and in Congress. As inequality gains traction as a political concept, Republicans may frame their goal as wanting to ensure equality of opportunity, while they accuse Democrats of desiring equality of outcomes. The word, opportunity, is one that Republicans have gotten away from. From 1948 through 1988, the parties used “opportunity” or “opportunities” about as often as each other in their platforms, although with some fluctuations from year to year. Since 1992, however, Democrats have mentioned opportunity about 60 percent more often than Republicans as a proportion of all words in their platforms. 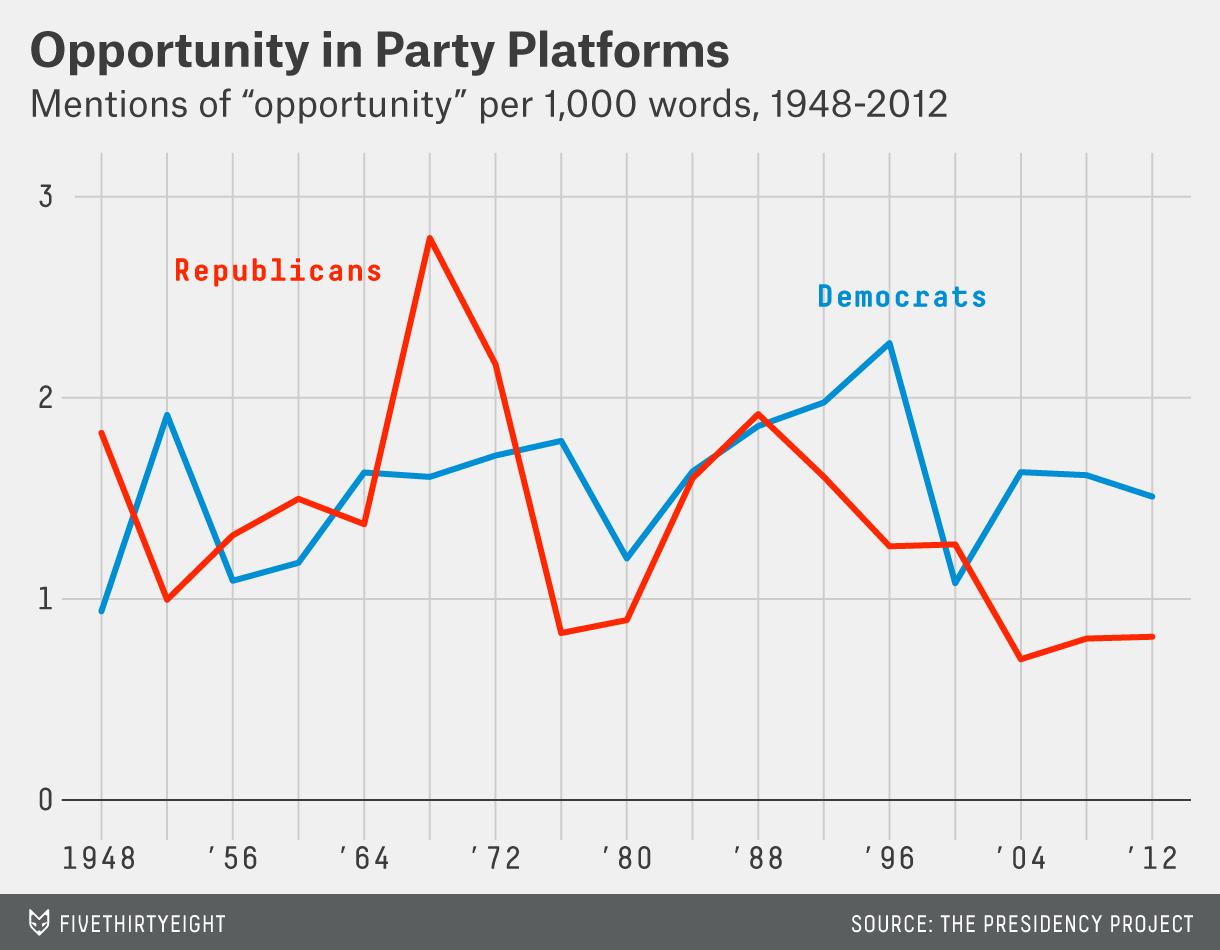 Both parties, then, might be inclined to rediscover some of their rhetoric from the 1970s and the 1980s. These weren’t glorious times for Democrats, who occupied the White House for only four years between 1968 and 1992. What’s different this time is that income inequality has risen steadily since then. It’s something you’ll almost certainly be hearing a lot about heading into 2016.

* More specifically, I searched for the text strings “equal,” “fair,” “free” and “libert-” in the party platforms. So, for example, words like “equalize” and “equal” will be counted along with “equality” and “inequality.” There may be a very small number of false positives — for example, the word “affair” (as in “foreign affairs”) contains the text string “fair” — but these cases are rare enough that they aren’t worth worrying about.