So many senators are declaring their support for same-sex marriage that I’ve regularly had to check my Twitter feed while working on this article, lest I miss any announcements. As Dylan Matthews of The Washington Post has detailed, 50 senators have now stated their backing for same-sex marriage, up from only 16 in 2010 and eight in 2008.

Why are senators shifting their positions so rapidly? Obviously, this mirrors the shift in opinion among the general public to some degree. But while the public’s increase in support for same-sex marriage has been exceptionally linear and steady, the number of senators endorsing it has increased at exponential rates over the last few years, with a remarkable jump in the last two weeks when a cascade of senators announced their support.

One explanation might be that there is “momentum” in the Senate behind same-sex marriage. Often, explanations rooted in notion of momentum are analytically lazy: they describe what is happening (“support is increasing!”) without really telling you why. However, it is plausible that senators are learning from one another’s experiences. If one senator comes out for same-sex marriage and finds that she is getting a favorable response from her constituents, her donors, her colleagues and the news media, she may encourage others to do so as well.

Nevertheless, I’m interested in whether we can replicate the increase in support through a reasonably elegant mathematical model. Same-sex marriage constitutes a very interesting data set for students of the Congress. Through polls and the results of ballot initiatives, there is good data available on public opinion over time — enough that we can develop a good estimate of how many of a senator’s constituents are likely to have supported same-sex marriage at any given point within the last dozen years or so. And compared with most public policy issues, it requires a relatively binary choice of policy outcomes: either you support same-sex marriage or you don’t. (Contrast this with budgetary politics: you might say you favor reduced deficits, but might prefer any of dozens of options to achieve them.)

What I did, therefore, was to expand upon the data set that Mr. Matthews published with his article, which lists all known cases of senators having endorsed same-sex marriage, along with the time at which they adopted their positions. I began by extending his data to include a comprehensive list of all senators since 1997 — not just those who endorsed same-sex marriage, but also those who did not. (More specifically, I created a data point for every active senator in every year — so, for instance, Senator
Lauch Faircloth of North Carolina in 1998 is one data point, and Senator Sherrod Brown of Ohio in 2010 is another.) Then I added additional variables.

One of these is simply a dummy variable indicating whether the senator was a Democrat or not (with independents considered as half-Democrats).

Next, I included each senator’s ideological rating on a one-dimensional liberal-conservative scale, as measured by the DW-Nominate system. (These ratings run on a scale from negative 1 for an extremely liberal senator to positive 1 for an extremely conservative one, so higher figures indicate a more conservative voting record.) DW-Nominate ratings are available for almost all senators, except those who joined the Senate this year. For new senators, I used the ideology ratings that we used as part of our Senate forecasts, which are calibrated to match DW-Nominate ratings.

I also included each senator’s year of birth. To what extent might the increase in support for same-sex marriage reflect generational turnover within the Senate itself?

Finally, I included a variable indicating the level of support among all voters nationally, as derived from the same model. The model assumes that support for same-sex marriage has been increasing nationally at a linear rate of about one and a half percentage points each year. (Note that this is mathematically equivalent to including a linear time trend variable in the model.)

A logistic regression analysis that uses these variables to predict whether a senator supports same-sex marriage yields the following results:

The two variables that show up as highly statistically significant are the senator’s ideology rating and the estimated support for same-sex marriage among voters in his state. This is unsurprising, since voting behavior in the Senate is fundamentally about senators seeking to balance their policy preferences against the views of their constituents.

The variable related to a senator’s party did not have any real predictive power. Does that mean that a senator’s party has no bearing on whether he’s endorsed same-sex marriage? Not quite. What it means, more precisely, is that a senator’s party did not have any additional predictive power once you’ve already accounted for his ideology rating. The ideology ratings already reflect a very substantial gap between the parties, however: the most liberal Republican in the Senate (Susan Collins of Maine) is rated by DW-Nominate as being to the right of the most conservative Democrat (Joe Manchin III of West Virginia). The split on same-sex marriage is highly partisan, but not any more partisan than the typical voting issue. (In fact, it may be very slightly less so — there might be slightly more partisan crossover on this issue than on others — although this is hard to test for because there are so few moderates in either party these days.)

Does a senator’s age matter? The birth-year variable runs in the expected direction: senators who were born later were slightly more likely to endorse same-sex marriage, holding other factors constant. However, the effects are very modest and not statistically significant. This may ind
icate that senators are by and large making a strategic calculation in their endorsements of same-sex marriage.

The interpretation of the national time-trend variable is complicated because it is highly collinear with the other variables, like the state-support variable. The question we’re more interested in is whether the model as a whole can replicate the exponential-seeming increase in same-sex marriage support in the Senate over time.

It turns out that the model does not do a particularly good job of this. It considerably underestimates support for same-sex marriage this year (it projects that about 37 senators should have endorsed it by now, not 50). Conversely, it considerably overestimates support for same-sex marriage over the period from about 2006 through 2010. In short, it expects a more steady and linear increase in endorsements for same-sex marriage (with some modest hiccups based on liberals or conservatives having good election years) rather than the more sudden one that we’ve seen. This is not surprising, since the major inputs in the model also assume a linear increase in public support. 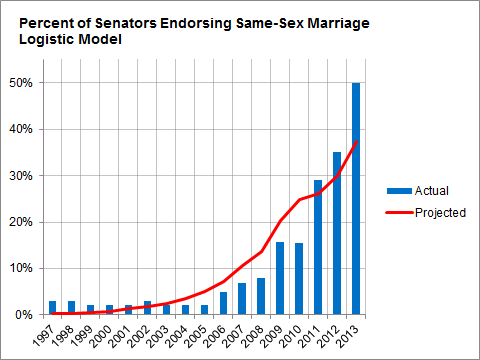 Even if public support for same-sex marriage is increasing at a steady rate, however, it does not necessarily follow that endorsements among senators should be doing so as well. The reason is the binary nature of the issue: although some senators seek to articulate ambiguous positions on same-sex marriage, for the most part they have to decide when and whether to come out in favor of it, with little ability to hedge their position once they’ve done so.

It may further stand to reason that senators seek to time their announcements with when they perceive support for same-sex marriage has reached a majority, both within their states and nationally. Certainly, some highly ideological senators may be happy to ignore public opinion, and some modestly ideological ones might shade their assessments of it. (For instance, a liberal Democrat might endorse same-sex marriage once they perceive that either a majority of their constituents or a majority of the country supports it, while a moderate Republican might want to wait for both.) Nevertheless, majority support could represent a key threshold and could introduce some nonlinearity into the pattern of endorsements.

This “majority model” in fact does a modestly better job of predicting same-sex marriage support among individual senators:

This version of the model also does a considerably better job of matching the change in support over time. For instance, it projects that 48 senators should have endorsed same-sex marriage by now, close to the actual total of 50. 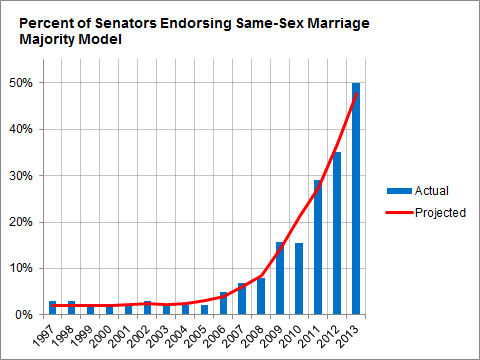 The model also does a better job of emulating the ramp-up in support over the last several years. Although the number of senators endorsing same-sex marriage has been especially noteworthy this year, it also increased considerably in 2011 and in 2012.

The hypothesis implied by the model is that this timing reflects when same-sex marriage began to reach a national majority (or at least a plurality) in some polls. Otherwise, it is hard to understand why same-sex marriage endorsements increased considerably in the Senate in 2011. Democrats had just come off a very bad election year, in which they were punished by voters in part for being too liberal. President Obama had not yet endorsed same-sex marriage. It had not yet won any victories at the ballot booth (as it would in 2012). However, by 2011, it had become possible to argue that support for same-sex marriage had become the majority position. By extension, it was also reaching majority status in more and more states.

The perception of majority status may influence the politics of the issue in profound ways. Mr. Obama’s endorsement of same-sex marriage last year may have been typical in this sense. Once it became arguable that support for same-sex marriage represented a majority view, it became harder for a blue-state Democratic president not to support it.

How many more endorsements for same-sex marriage might we expect in the near future? (For now, I’ll continue to evaluate this from a macroscopic perspective rather than trying to predict the behavior of individual senators — something we’ll save for a separate article.)

While there will almost certainly be a few more endorsements over the next year or two, it’s very likely that the rate of increase will slow down. Some of this is just a mathematical necessity: a bounded quantity (there are only 100 senators) cannot continue to grow exponentially forever.

More than that, however, if the recent cavalcade of endorsements is caused in part by senators perceiving that same-sex marriage has potentially become the national majority position, endorsements will begin to decelerate once it has become unambiguously the majority stance. Some senators will continue to oppose it, either because it does not yet constitute a majority position in their states (like Senator Heidi Heitkamp of North Dakota, they may say it should be decided at the state level), or because they oppose it on moral grounds, or because t
hey are more concerned about a primary challenge than the general election.

In other words, the past year or two has been a good time for senators to jump on the same-sex marriage bandwagon, and most of the stragglers (i.e., Democrats from blue or purple states) have been rounded up. The remaining senators who have not taken the opportunity yet may have good political reasons for it, and may wait some time before they do.