Twenty-eight of the 30 delegates in Michigan’s Republican primary will be awarded, two at a time, to the winner in each of the state’s 14 Congressional districts; only two will go to the candidate who takes the most votes statewide.

There are competing theories about just whom this might favor. One hypothesis holds that although Mitt Romney might dominate in Detroit’s wealthy suburbs, he is either an underdog or no better than even money against Rick Santorum pretty much everywhere else in the state. Since winning a district by 20 percentage points does you no more good in the delegate count than winning one  by 2 points, that means Mr. Romney could have some wasted votes.

The other theory holds that Mr. Romney’s voters tend to be concentrated in districts where turnout will be low. This is not necessarily a reflection of subpar enthusiasm for his campaign; instead, it’s because some of these wealthy suburban areas are paired with cities like Detroit and Ann Arbor that vote heavily Democratic. Therefore, Mr. Romney could win a Congressional district where 15,000 people turn out to vote in the Republican primary, but lose another one where 75,000 do. But both count equally on the delegate scoreboard.

Which of these two theories is liable to prevail? If you go through the state’s Congressional districts one at a time, it looks as if both have some merit.

Michigan’s delegates will be awarded based on its provisional new Congressional district lines; the state is losing its 15th Congressional District because of population decline. A map of the new districts is below; you can also find more detail on them on the Michigan Senate’s Web site. 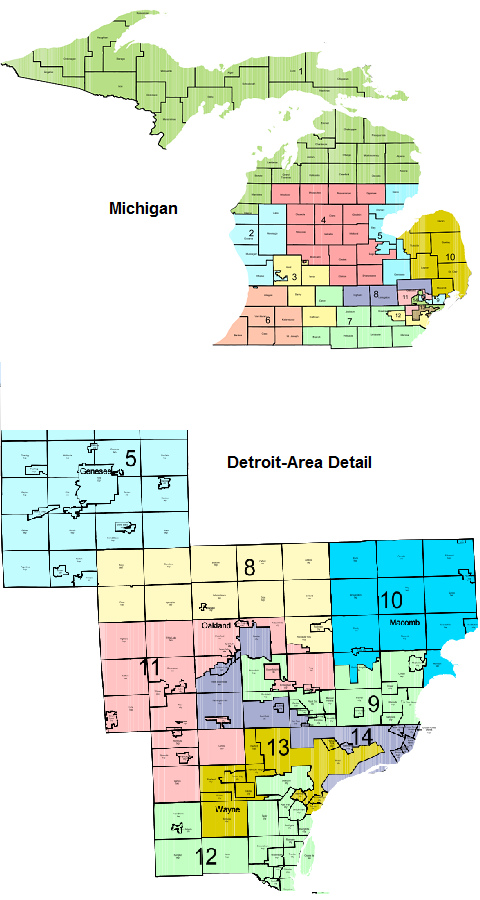 To evaluate the districts, I am relying upon Micah Cohen’s post on the political geography of the state, along with 2008 voting results, a NBC/Marist poll that broke out its results by region, a recent Public Policy Polling poll that listed results by area code, and my own knowledge of Michigan from having been born and raised there.

The characterization of the Congressional districts is predicated on the notion that the state will be fairly close over all. And I am mostly focused on Mr. Romney and Mr. Santorum, although there are a couple of areas where Ron Paul could be relevant.

First Congressional District: Upper Peninsula and Northern Lower Peninsula. Favors Santorum. The Upper Peninsula itself, which contains just less than half of the district’s population, should favor Mr. Santorum; the northern reaches of the Lower Peninsula, where Mr. Romney did relatively well in 2008, perhaps less so. Still, the Marist survey had Mr. Santorum leading by five points in this region in a poll where he trailed by two points statewide, while other surveys have suggested a larger advantage for him. Mr. Santorum has been working this district, presumably in an effort to increase turnout; he could lose it, but probably only if he loses the whole state.

Second Congressional District: West-Central Michigan — Ottawa County. Favors Santorum. The bulk of votes here should be in Ottawa County, where Mr. Romney underperformed his statewide totals by four percentage points in 2008 and Mike Huckabee overperformed his by eight points. The Holland-Grand Haven area is religious and conservative and should favor Mr. Santorum. Mr. Romney could be more competitive in the eastern portion of the district, which is closer to Grand Rapids, but it is the sort of district that Mr. Santorum will need to win in order to carry the state.

Third Congressional District: Grand Rapids — Kent County. Tossup. This district is largely coterminous with the city of Grand Rapids and its immediate suburbs, and should have a heavy turnout. It is more middle class than working class, especially compared with the rest of western Michigan, with a few wealthy pockets that have their share of country club members. The polls show split results on who is likely to have the advantage here.

Fourth Congressional District: Central Michigan. Favors Santorum. The Fourth district is rural and contains small towns like Midland and Mount Pleasant, along with portions of Saginaw. Mr. Huckabee performed relatively well in this part of the state in 2008 and it should favor Mr. Santorum.

Fifth Congressional District: Flint — Saginaw Bay region. Tossup. Although this district should go Democratic in November, it is cut in something of an unnatural way in the context of a Republican primary and it is hard to predict who will win here. About two-thirds of this district’s population is in Genesee County, home to the industrial city of Flint, which has been in a long state of urban decay and population decline. However, there are relatively few Republican voters in Flint. The result could be determined by Bay County, which wraps around Lake Huron and is a swing county in general elections.

Sixth Congressional District: Southwest Michigan — Kalamazoo. Favors Santorum. The Public Policy Polling survey had Mr. Santroum running 13 points ahead of Mr. Romney in the 269 area code, which largely coincides with this district. A swing district at the presidential level, it is somewhat less religious than the 2nd district to its north but is nevertheless blue-collar. The most southwestern portion of it has a relatively weak attachment to the rest of Michigan and can root for Chicago or Indiana-based sports teams, meaning that it may be less impressed than the rest of the state by Mr. Romney’s native-son status.

Seventh Congressional District: Southeast Michigan. Tossup. This district largely avoids the Detroit metropolitan area, instead skirting the border with Ohio. Mr. Romney is likely to perform more strongly in its eastern reaches, like Monroe County, that are more within Detroit’s sphere of influence, but should lose votes to Mr. Santorum in the western and more rural portions. It should be one of the better bellwethers in the state, and is too close to call.

Eighth Congressional District: Capital Region — Lansing. Tossup. The Public Policy Polling survey had Mr. Santorum slightly ahead in Lansing’s 517 area code — but the district stretches eastward into Oakland County, where voters in the 248 area code slightly favored Mr. Romney. Indeed, the Eighth District is fairly well representative of the state as a whole. Parts of the district are fairly socially liberal; the college town of East Lansing, where Michigan State University is located, could be a stronghold for Mr. Paul, and most of the votes for Mr. Santorum will be crossovers from Democrats behaving mischievously. Lansing itself is more industrial — although it is the state capital, so if there is anywhere that Gov. Rick Snyder’s endorsement of Mr. Romney might swing a few votes, it could be here. Voters in the district have been receiving a lot of attention from the campaigns. I’d consider it a tossup that slightly tilts toward Mr. Romney: not quite a must-win for him, but the sort of district that could get away from him if he’s having a poor night.

Ninth Congressional District: Northern Detroit Suburbs — Oakland County, Macomb County. Favors Romney. This is Romney country. About half the district’s population is in Oakland County, which should favor him. The other half is in Macomb County, and while Mr. Santorum could be fairly competitive in industrial cities like Warren, this district tends to contain the weather portions of Macomb and Mr. Romney should rack up huge margins in executive towns like St. Clair Shores.

10th Congressional District: Thumb Region — Northern Macomb County. Tossup. A swing district; Mr. Romney carried all of its counties in the 2008 primary, but the Public Policy Polling survey found an advantage for Mr. Santorum in the 989 and 810 area codes toward its north and east, which are sleepier and more rural. Mr. Romney will need to make up votes in the southern part of the district, which contains the remaining portion of Macomb County.

11th Congressional District: Western Detroit Suburbs — Oakland County, Livonia. Favors Romney. This should be among Mr. Romney’s best districts in the state. Most of the population is in Oakland County and much of the balance is in Livonia, both of which have high incomes. The question is not so much whether Mr. Romney will win but how heavy the turnout will be. Mr. Romney will want Oakland County’s turnout to at least match the 133,000 Republicans who voted there in 2008 to hedge against a surge of Santorum enthusiasm in other parts of the state.

12th Congressional District: Ann Arbor, Dearborn. Favors Romney. There are not likely to be many Santorum voters in the 12th District, which is dominated by the liberal college town of Ann Arbor and the University of Michigan, along with the city of Dearborn, which has a large Arab-American population. The concern for Mr. Romney is that the district does not contain many Republican voters period, so there is some chance of a loss to Ron Paul if the turnout is dominated by college students. Arab-American voters could also be drawn to Mr. Paul if they like his more tolerant stances on immigration and his hands-off stance toward American intervention in the Middle East.

13th Congressional District: Detroit and Immediate Southwestern Suburbs. Favors Romney. Detroit itself is split between two districts, the 13th and the 14th. This district is dominated by the city, as it contains only a few small and relatively industrial towns, like Inkster and Romulus, along with it. Turnout should be extremely low and it is hard to get a sense of exactly where the Republican votes will be. That makes it unpredictable to some degree, but the voters are unlikely to be social conservatives, and Mr. Romney should get through by winning communities like Dearborn Heights.

14th Congressional District: Detroit, Grosse Pointe. Favors Romney. The 14th District, however, should be completely safe for Mr. Romney. Although it contains portions of Detroit and the majority of residents are black, the outstanding parts of are extremely favorable to him, like the very wealthy and very pretty towns of Grosse Pointe and the southeastern corner of Oakland County.

Overall, I’ve classified five districts as favoring Mr. Romney, four as favoring Mr. Santorum and five others as tossups. What that means is that there isn’t likely to be a huge skew between the popular vote and the delegate count. It is possible that a candidate who takes a narrow statewide loss could carry 8 out of 14 districts, or 9 out of 14 if everything breaks exactly right.

But more likely, the candidate who wins the popular vote will also take home the most delegates. If Mr. Romney can win the 13th and 14th Districts with a light turnout, he’ll also need a heavy turnout in the 11th to have a good chance of carrying the state. Meanwhile, although Mr. Santorum tends to do better in more Republican-leaning areas, he isn’t likely to be so dominant in them that he can win Michigan without also carrying some swing districts, like the Third, Eighth and 10th.