This is Strength in Numbers, a new column exploring the science of sports and athleticism. As this feature takes shape, I welcome your feedback, suggestions and news tips. Email me, leave suggestions in the comments section or tweet to me @CragCrest.

It may seem like doping is constantly in the news, but a comprehensive report released by the World Anti-Doping Agency last Wednesday showed that very few drug tests come up positive. Just a sliver of samples the organization handled in 2014 produced suspicious findings and only 64 percent of these positive tests ultimately led to a sanction. Ten percent of positive drugs tests were ultimately dismissed because the athlete presented a “therapeutic use exemption,” essentially a doctor’s note saying that the drug was medically necessary, and another 20 percent or so are dropped or the athlete is eventually exonerated. While some people have wondered if anti-doping efforts have become too aggressive — for instance, by going after amateur athletes — the numbers suggest that few athletes ever get caught up in doping charges. 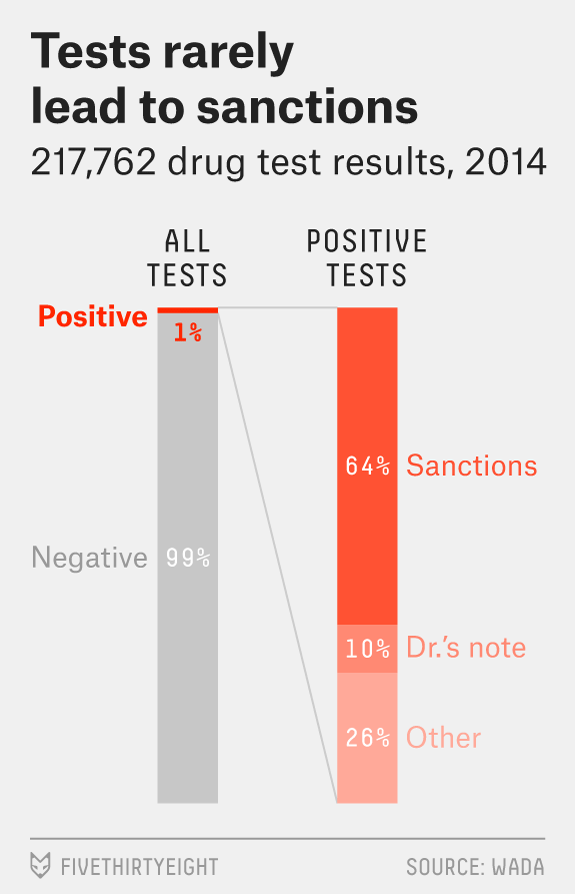 Cases like Lance Armstrong and the Balco steroid scandal have shown that dopers and their drug dealers work hard to remain a few steps ahead of the tests, so WADA has also focused on intelligence in recent years. The current WADA Code emphasizes these so-called “non-analytical” means for catching dopers, and the new report notes that 231 doping offenses resulted not from drug tests but from detective work. Those cases were based not on positive tests, but evidence such as “evading, refusing or failing to submit a sample; possession and/or trafficking of a prohibited substance; or complicity,” WADA Director General David Howman said in a statement.

If you’ve been following the news, you probably won’t be surprised to learn that Russia tops the leaderboard for doping nations, followed closely by Italy.

The sports that received the greatest numbers of doping sanctions are the ones you’d expect — track and field, cycling and power sports like weightlifting.

Doping isn’t limited to Olympic sports, and dozens of other sporting groups have signed on to the WADA code. It turns out that cheerleaders are occasionally tempted to give themselves some extra spirit — WADA processed 42 drug tests for the sport of “cheer,” which resulted in one drug sanction. Tug of war also has dirty players (107 drug tests and one sanctioned athlete) — then again, the culture of the game I’ve seen at picnics has always been “win at any cost.” Personally, if I’m ever drowning, I won’t worry about whether the lifeguard who saves me took steroids, but the folks who turned this job into the sport of life saving do care — they did 233 tests and sanctioned four athletes.

David Seath, a 31-year-old British Army captain died while running the London marathon this month, just a few miles from the finish when he collapsed. Deaths like his get a lot of attention — elite runner Ryan Shay’s death during the 2007 Olympic trials marathon shocked the running world — but how common are they?

A study published in 2007 gathered data from 26 London Marathon races — a total of 650,000 completed runs — and calculated that the cardiac death rate for the London Marathon is 1 in 80,000 finishers. On a time-of-exposure basis, the authors wrote, this risk is less than riding a motorcycle and about three to four times greater than riding a bicycle in Europe for a similar period of time. All eight of the people who died at the London marathon during this time period showed signs of serious, pre-existing heart problems on autopsy, a pattern seen in most marathon-related deaths. (A post-mortem examination revealed that Shay had experienced an irregular heartbeat as the result of a scarred and enlarged heart.)

Rich Harshbarger, CEO of the advocacy group Running USA, pointed me to a survey of U.S. marathon medical directors showing that sudden cardiac arrest occurred in approximately 1 in 57,000 runners and resulted in a mortality rate of about 1 in 170,000, which is less than half the rate calculated for the London race. Harshbarger suggested that advancements in automated external defibrillator (AED) availability and rapid response CPR might reduce these numbers.

But it’s not clear whether either of these figures reflect the true numbers. A systematic review published earlier this year scrutinized data from seven studies and reported that the incidence of sudden cardiac death among marathoners ranged from 0.6 to 1.9 per 100,000 runners. The review also found that sudden cardiac death in marathons is most common among men age between 30 and 50.1

Before you non-runners start tweeting that these deaths are proof that running is dangerous, consider what cardiologist Paul Thompson told Runner’s World a few years back: “If your only goal is to survive the next hour of your life, you should get into bed — alone.” If, on the other hand, “you want to live a long, vigorous life, you should do an hour of moderate exercise a day,” he said.

Last week, Miami Marlins star Dee Gordon tested positive for Clostebol and testosterone and received his 80-game suspension without a challenge. Not every doper who’s tested positive for the drug has done the same. In the early 2000s, an unnamed male athlete in Brazil blamed his positive Clostebol test on a sexual encounter — the steroid is used in some dermatologic and gynecologic medications in Brazil.2 Researchers decided to test if that was possible, recruiting two couples and two additional men to help them test whether having intercourse with a woman using a Clostebol cream or applying such a cream directly to the penis would result in detectable Clostebol in the men’s urine. The answer was yes — barely. “The possibility of incidental contamination from sexual intercourse was confirmed,” the scientists wrote in Clinical Chemistry, but they noted that the levels found in the study were near the limit of detection (the Brazilian athlete did not avoid a sanction). Kudos to Gordon for skipping the “it’s my wife’s fault” excuse.

Give cheaters a point for creativity. Last Tuesday, the UCI handed Belgian cyclist Femke Van den Driessche a six-year ban for “mechanical doping” — using a bike equipped with a concealed electric motor to compete in this year’s cyclocross World Championships. The sanction follows an investigation by French and Italian journalists, who used thermal sensors at two recent European cycling races to detect riders3 using tiny motors hidden inside their bicycle frames to give them an extra boost. Many commentators were quick to suggest lifetime bans for mechanical dopers, while others wondered why drug doping had failed to elicit as much outcry. Velo News editor-in-chief John Bradley proposed an answer: drug doping made cycling look like a dirty sport in the public’s eye. “With a motor in a bike, they won’t even see it as a sport,” he tweeted.

Don’t call it a World Record

British astronaut Tim Peake has set a record for the fastest marathon by a Homo sapiens running somewhere other than Earth. Peake timed his run to coincide with the London Marathon, but he ran the race on a treadmill inside the International Space Station. During the three hours, 35 minutes and 21 seconds it took him to complete 26.2 miles, the space station completed about two-and-a-half laps around the Earth.

The NCAA has a way to tell.

CORRECTION (May 3, 10:40 p.m.): An earlier version of this article misidentified Femke Van den Driessche’s nationality. She is Belgian, not Dutch.