When Noma was named the world’s best restaurant on Monday, its head chef, René Redzepi, swore, celebrated — and denigrated the award.

“This is too fucking crazy,” Redzepi said on stage at London’s Guildhall as he celebrated with his staff. In a press conference later, he called the award “the biggest surprise I’ve ever had.” His Copenhagen restaurant had won three straight times before being unseated last year by El Celler de Can Roca, in Girona, Spain. Redzepi said he didn’t expect to make it back to No. 1 this year — he would have been pleased to remain in the top 20.

The World’s 50 Best Restaurants list has helped promulgate the concept of the celebrity chef, while making the careers of some list regulars and packing tables in ways many chefs say Michelin stars can’t. Redzepi credited the 12-year-old list with validating his experimental version of Nordic cuisine and putting his 40-seat restaurant — where 20 courses cost 1,600 Danish kroner ($296) — on the global gourmet-food traveler’s map.

But he also acknowledged that the award is a fundamentally silly one. “Come on, the world’s best,” he said, with derisive enunciation. “Is the color red the best in the world this year?” He added, “Of course I don’t consider Noma to be the best in the world.” At some tiny ramen places in Tokyo where he’s dined, he said, “You’ll have the best meal of your life.”

Ranking restaurants is so problematic that it makes ranking college football teams seem positively scientific. The adage “There’s no accounting for taste” is as true as it is stale. Evaluating even a single dish is subjective, never mind comparing an entire restaurant to a whole world of them. Is a meal more than the sum of its parts? Can a restaurant be judged by a single meal, especially one that might be tailored to the taste of the food-industry insiders who judge the awards? How can two restaurants aiming for different audiences and serving different cuisines be ranked, even in the same city?

Wisdom of the crowds doesn’t solve the problem: Maybe one restaurant’s Yelp ranking is best because it has the most generous diners. Ideally you’d find fair judges with expertise and credibility to try each restaurant. But how could anyone afford to visit countless restaurants and then rank the top 50 each year? 1

Redzepi wasn’t the only honored chef to question the concept of a world restaurant ranking. Outside Guildhall before the ceremony, chef Yoshihiro Narisawa said of the restaurants list, through a translator, “I don’t know if it’s correct or not.” Later, Narisawa learned his eponymous Tokyo restaurant was ranked 14th, up six slots from last year.

Daniel Patterson, whose Coi restaurant in San Francisco was the only American newcomer to the list, said sports provide much clearer winners. “If you hit a ball, it’s definitive,” he said in the 15th-century building’s great hall after learning Coi ranked 49th. “This is a judgment call. I couldn’t say how I would even begin to qualitatively judge restaurants that are so different.”

Then again, Patterson said the list strikes him as a good one: All of this year’s Top 50 he’s tried are “great restaurants,” and Noma is “the most important restaurant in the world.” And he doesn’t doubt the ranking’s clout: He’s heard from honored peers that they’ve gotten a big bump in bookings, which Patterson said Coi could use midweek.

Restaurant Magazine, the U.K. trade publication that organizes the awards, names the chairs of the 26 regional judging panels around the world. (The panel is sponsored, aptly, by Diners Club International.) But the identities of the other 910 judges are kept confidential, lest they be lobbied by contending chefs. Patterson won’t say if he was a judge, but he’d make a good one: He estimated he has dined in “maybe 20” of the honored restaurants, including eight or nine of the top 10.

The awards have come a long way since their founding as something of a lark, a quick poll by the small-circulation magazine of mostly British chefs and food critics. The ceremony remains quite British — hosted by a British magazine, in London, with emcee Mark Durden Smith, a British television presenter who joked that after last year’s gaffes, he would donate 1 pound ($1.68) to charity for each mispronunciation this year. But the judging panel has mushroomed and globalized to match the worldwide avant-garde food scene, and so has the list. A decade ago, the top two restaurants, and 22 of the Top 50, were in the U.S. or the U.K. Today, just 10 are, none of them in the top three. In addition to adding restaurants from Asia and Latin America,2 the contest has spawned Top 50 lists for both regions. Since 2011, there has also been an award for the best female chef, though of the 54 chefs featured in the Top 50 restaurant guide, just two are women. 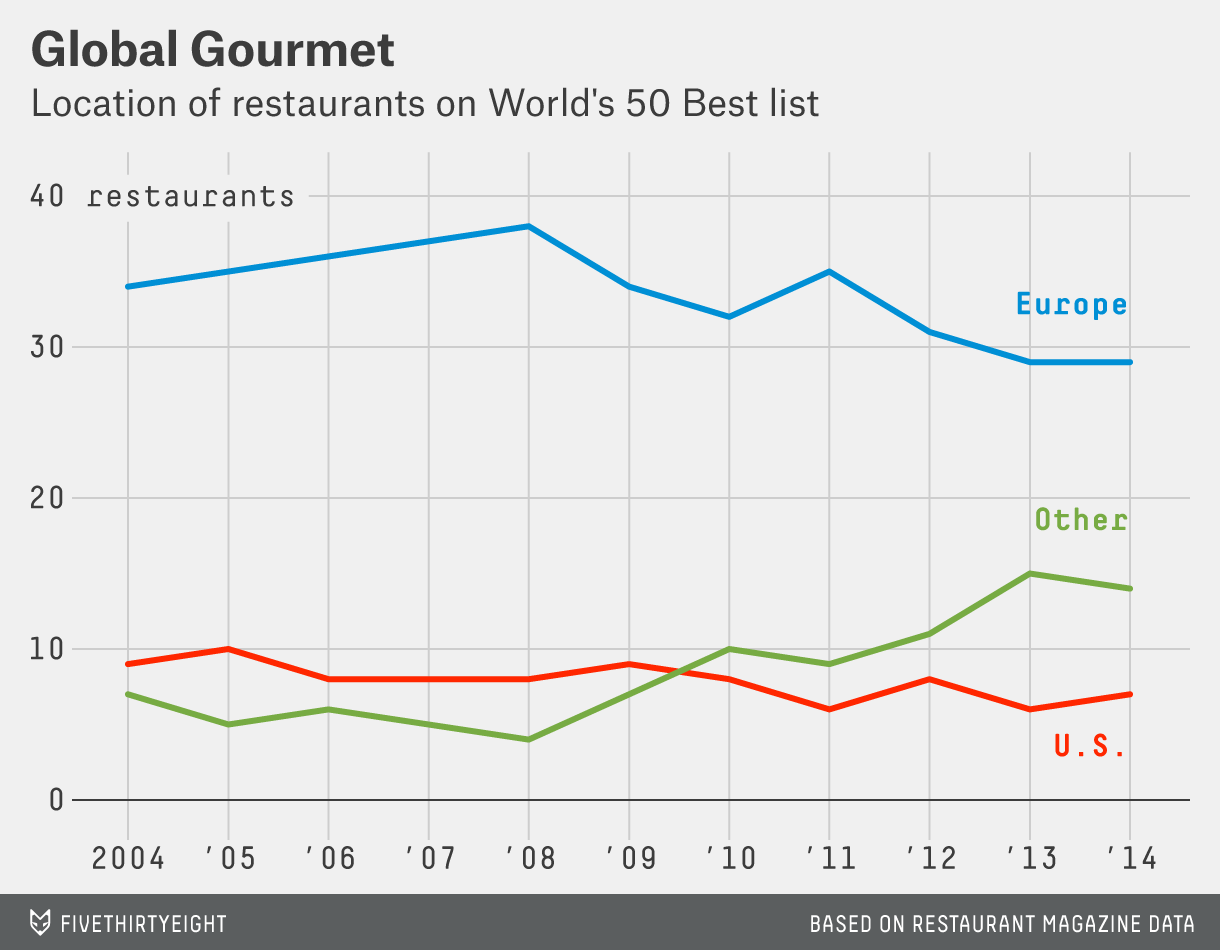 The early rankings engendered annual upheaval, as the number of judges and media attention grew. About 20 restaurants dropped off the list in each of the 2005 and 2006 rankings.3 Today the list has stabilized: Just seven of this year’s restaurants didn’t make last year’s Top 50, and the 43 restaurants that remained on the list moved by an average of eight spots. This year’s top eight restaurants were identical to last year’s — but in a different order.

The rankings aspire to be as accurate as they can, given the inherent limitations. Judges are chefs, restaurateurs, food critics and “highly regarded ‘foodies,'” as a brochure puts it. Each judge gets seven votes, which all must go to restaurants where the judge has dined in the past 18 months. At least three of the votes must go outside the judge’s region, and none can go to a restaurant in which the judge holds an interest. At least 10 judges from each region are swapped each year.4

The judges are left entirely to their own devices, with no guidance on what to consider, or how to weight, say, food, service and decor. “There is no pre-determined checklist of criteria,” the magazine’s rankings manifesto says. The votes are summed, and the restaurants ranked by total votes. “Given that this list is based on personal experiences it can never be definitive, but we believe it is an honorable survey of current tastes and a credible indicator of the best places to eat around the globe.”

All the confidentiality reduces transparency without eliminating the possibility of lobbying judges. As insiders, many likely are being lobbied by candidate restaurants already as part of routine industry networking. And restaurants have honed their espionage tools over decades of trying to ferret out the identity of disguised food critics.

There’s no independent way to assess the rankings’ accuracy — no equivalent of college bowl games or the NCAA tournament to see if higher-ranked restaurants deserve the accolade. Fewer of the top 10 get a perfect five out of five stars on Yelp than get a four. More than one has gotten fewer than 10 reviews. Yelp hasn’t even expanded to some of the restaurants’ cities, such as Cape Town. The same goes for Michelin, which hasn’t issued a guide for No. 13 Nahm’s hometown of Bangkok. The top 10 all have two or three Michelin stars. But then so do some restaurants farther down the list, such as three-starred The Fat Duck (U.K.) and The French Laundry (Yountville, Calif.), each of which ranks in the 40s. TripAdvisor ratings often are based on many reviews, but many of the amateur critics on that site are comparing meals from the same trip, rather than evaluating restaurants on a global scale.

Redzepi isn’t alone in trying to pull off the tricky balance between celebrating the rankings while also diminishing their importance — having his caramelized-shallot canapé (among the selections at the pre-ceremony reception5) and eating it, too. During Redzepi’s press conference, William Drew, editor of Restaurant Magazine, who was moderating, interceded to say, “Obviously there is an inevitable focus on the rankings.” However, he added, the event was primarily a “celebration” of all of the restaurants. Organizers nonetheless rank the Top 50, and also publish the list of Nos. 51 to 100.

It’s doubtful the list would ever have gotten the international media coverage it now receives, or been announced at an event modeled after ones like the Emmys and the Oscars, if judges hadn’t ranked the Top 50. When I asked Redzepi in an interview after his press conference whether the ranking aspect was critical to the Top 50 list’s success, he said, “Yes, without a doubt.” He pointed to a Conde Nast Traveler “hot list” designation received by Copenhagen’s Hotel d’Angleterre last week that made national news in Denmark.

“No matter, how crazy, how unfair, unreal it is,” Redzepi said of the list, “it becomes part of the world, of the reality.”

Here’s one measure of how unfair it is: I asked Redzepi for the names of those ramen places he mentioned in his press conference. Maybe with some publicity, they, too, could make the Top 50. “I can’t even pronounce it,” he said of one restaurant’s name, which he didn’t recall — though he remembered the poached egg, “the same color of a descending sun in autumn.”

The best restaurant in the world for one family, on one night, could be a pizza place that the kids love and that can get them in and out in 45 minutes. That’s usually the case for Patterson when he dines out with his family. When he’s traveling alone for work, trying the world’s best restaurants is research for the job. In the Bay Area, he’d rather eat at places like the well reviewed Pizzaiolo Restaurant, in Oakland, where pizzas cost between $12 and $20. But restaurants that charge that little can’t really compete with the Top 50, Patterson said, on “innovation, refinement and level of ingredients. You really can only afford to do it if you charge a lot of money.”

Inaki Aizpitarte is the chef at Le Chateaubriand, the Paris restaurant that is one of the least expensive on the list, with a 60-euro ($83) tasting menu. He wandered by and jumped into my interview with Redzepi, so I asked him if Noma was the best restaurant in the world. “Of course not,” Aizpitarte said, right in front of Noma’s chef. The world’s No. 1 restaurant is great, he said, but “when you go to Noma, it’s Noma.” The best meal is to be had, he said, at a place that is simpler, easier. “The situation is food and you.”