The Philadelphia 76ers are one loss from tying the NBA record for longest losing streak. And barring an enormous upset on the road against the Houston Rockets on Thursday, they’ll tie the 26-game run of futility by the Cleveland Cavaliers in 2010-11. The Sixers have a better chance of losing their last 11 games of the season than they do of beating the Rockets to avoid matching that ignominious record.

But in a lost season in Philly, fans have two reasons to hope the 76ers can keep from setting a new losing-streak mark. First, up next after Houston is a home game Saturday against Detroit. The Sixers have a 1-in-3 chance of winning that one. Second, they’ve played well recently, in the latest demonstration that wins and losses alone don’t show how well a team is doing.

An NBA team’s probability of winning a game depends on its performance level as measured by Basketball Reference’s Simple Rating System, its opponents’ SRS, and home court. Incorporating all three factors,1 I found that Philadelphia has a 4 percent chance of beating the Rockets on Thursday. Houston is more than five points per game better than league average, and will play with home-court advantage against a Sixers team with a typical level this season of 11.5 points per game below average.

So, let’s say the Sixers lose to Houston as expected. Then Detroit comes to Philadelphia, with a losing-streak record on the line. The Pistons are three points below league average, and will be playing on the road. Philadelphia has a 34 percent chance of winning the game, and a 33 percent chance of breaking its losing streak. (I’m accounting for the minuscule probability that the 76ers beat the Rockets first.)

Detroit is the second-easiest game left on Philly’s schedule, after a home date with Boston in the season’s penultimate game. The Sixers have a 38 percent chance of winning that one, but just an 8 percent chance of breaking their streak in that game, because most likely it will have ended before then.

I ran the numbers on Philly’s chance of winning each remaining game, as well as of breaking the streak in each game. The latter probability is lower than the former for each game after the one against Houston, because two conditions must be met: Philly must win, and must not have won before. Based on these calculations, Philadelphia has a 12 percent chance of finishing the season on a 36-game skid — or three times its probability of beating Houston on Thursday. 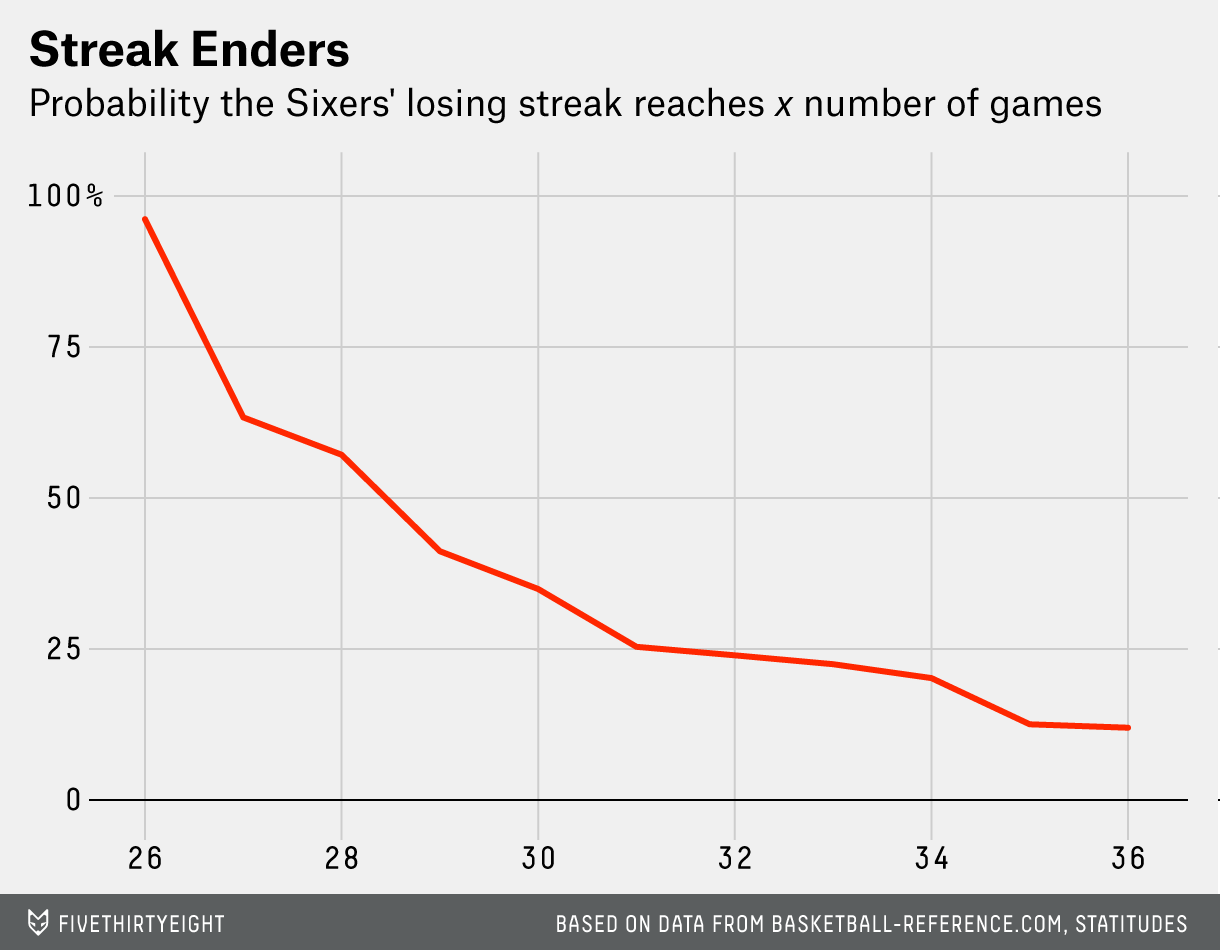 Some factors might make it easier for Philly to win than these probability calculations suggest. Opponents that have clinched their playoff spot and seed, or that have been eliminated from the postseason, might rest their stars. Then again, no team wants to lose to an opponent with a losing streak of 25 games — or longer.

There’s another reason Philly’s chances might be better than they look: In the Sixers’ last five games, they’ve been closer to mediocre than terrible. I evaluated their performance level by taking their margin of defeat in each game, adjusting for home-court advantage2 and opponent strength.3 In four of the last five games, the Sixers have played better than their typical level this season.4 They were within five points of league average in their one-point home loss to the Knicks, and were even better in a nine-point road loss to the East-leading Pacers. In that game — in which Philadelphia trailed by three with under two minutes left — the 76ers performed at a level just two points below league average. 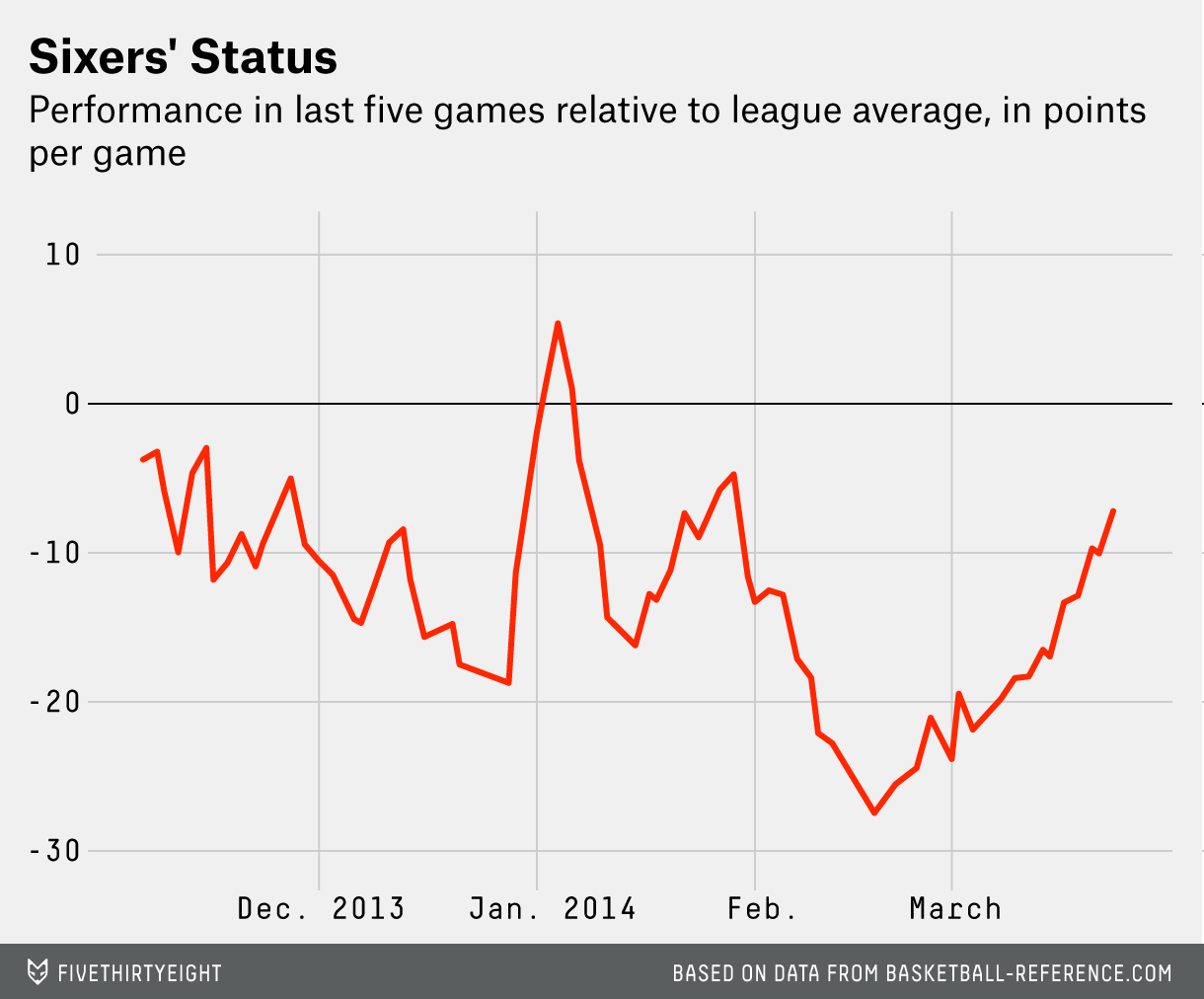 So, over the last five games, the Sixers have improved to a level somewhere between the Orlando Magic and the Milwaukee Bucks, the two teams just above them near the bottom of the league power ratings. Does that mean the chances of the 76ers winning their remaining games, and of ending the streak, have gone up? History doesn’t provide many precedents. Just six other NBA teams have had losing streaks of more than 20 games. Two of those streaks extended over two seasons, and any effect of the team’s level at the end of the first season was unlikely to carry over to the start of the next season. The Charlotte Bobcats lost their last 23 games of the season in 2011-12, and showed little sign of winning a game near the end: Their performance in four of their last six games was more than 20 points below league average.

That leaves three teams that broke losing streaks of longer than 20 games during the regular season: the 1995-96 Vancouver Grizzlies, in the first year of the franchise; the 1997-98 Denver Nuggets; and the 2010-11 Cavs. The Grizzlies suffered the worst loss of their 23-game losing streak two games before ending it. The Nuggets showed no signs of improvement near the end, performing at least eight points below average in each of their last eight losses. The Cavs, though, signaled their potential toward the end of their record 26-game streak: Their best five-game run of the streak came in the last five games, including a three-point loss in Dallas against a strong Mavericks team two games before Cleveland finally won, beating the Los Angeles Clippers in overtime.

These streaks had at least one thing in common: All three teams won their first game in more than 20 against teams performing at a level more than two points below average. So circle that game against Detroit, Sixers fans — and be ready to circle the home game against Boston if Philly doesn’t get it done against the Pistons on Saturday.