Think of an American president being inaugurated. What image comes to mind? 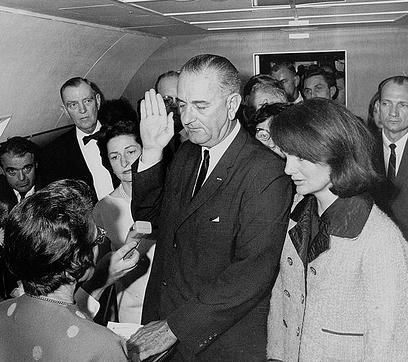 Almost certianly this one, eh?

This picture embodies what is perhaps the essential difference between the qualifications for the presidency and the qualifications for the vice presidency. In a perfect world, we would all like a president who is Ready on Day One (TM); it is not uncommon for a newly-elected president to face a major crisis almost immediately upon taking office. But more commonly, a president takes the Oath of Office under relatively calm waters, allowing them something of a learning curve.

On the other hand, when a vice president takes over for a president, the nation is necessarily undergoing a crisis, because the death (or resignation) of a president is perhaps as traumatic an event as can reasonably be imagined (in the “best” case resulting from a slowly-developing illness, and the worst, an attack by terrorists or foreign adversaries).

From Lincoln though Clinton, Americans have frequently been willing to gamble on a relatively inexperienced President, exchanging some assurances of near-term readiness for longer-term upside (what might be described as “vision”). But the optimal skill set for a vice president is somewhat different. “Vision” hardly matters; a vice president taking over for a president will not get to name his own cabinet, and will initially at least be left to execute upon somebody else’s agenda. Instead, the readiness component is rendered more important.

I suspect most Americans grasp this on a gut level, even if they aren’t quite able to articulate it. Which is why, to my gut instinct, I think Americans can feel sympathy for Sarah Palin, can believe she’s the sort of person they’d want to have a beer with — and still find her a detriment to McCain’s case for the White House.