It seems strange to talk about this just months after Barack Obama could seem to turn out 50,000 for a rally at the drop of a hat. But there are some worrying signs for Democrats that may be impacting the debate on health care and other issues. Take what Tom Jensen of Public Policy Polling found in Virginia, for example:

Last week I was skeptical of SurveyUSA’s poll showing an electorate that voted for John McCain 52-43…but we actually found it at a 52-41 McCain advantage.

Suppose that we take some liberties with Jensen’s data and apply them not just to Virginia but to the rest of the country. Right now, the partisan ID split among adults in the country is about 34 percent Democrat, 24 percent Republican, and 36 percent independent (plus an additional 6 percent “other”). But suppose that, in accordance with PPP’s Virginia poll, 42 percent of Democrats are highly engaged at the moment — 42 percent of 34 percent is 14 percent. Now suppose that 60 percent of Republicans are highly engaged — 60 percent of 24 percent is also 14 percent, the same total that we got for the Democrats. 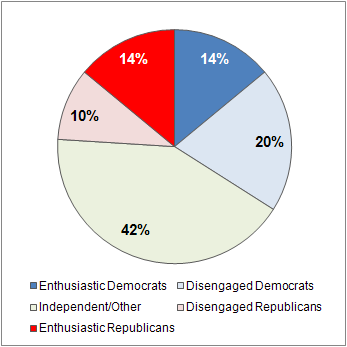 All right, so that’s a little imprecise by the standards of what we usually do around here. But for all sorts of tangible and intangible reasons — probably none more profound than that Republicans have been losing every election for the past few years and nothing warms the spirit like revenge — I suspect that something like this approximates the state of play in the country right now: the depth of Republican support is starting to rival the breadth of Democratic support. Sometimes, American politics resembles a screaming contest, and Republicans — though fewer in number — are screaming a little louder right now.

I certainly do think, by the way, that the semi-organized efforts to disrupt things like health-care town halls have some chance of backfiring. Americans are actually a relatively civil people, and all it might take is one idiot taking things too far for the “movement” to lose a news cycle or six. The whole point of these efforts, moreover, is to make a molehill of opposition look like a mounain.

Fake mountains (mass movemnts) don’t generally beat real ones. But the Democrats don’t have a mass movement right now. They have an electorate that’s maybe 60 percent unaware of the threat that things like health care are under in Washington, 20 percent aware but burned out or ambivalent, and 10 percent both aware and engaged but busy fighting with one another. That doesn’t leave very many Democrats left to stand up and shout back.

The Democratic Party’s fundamentals, to paraprase John McCain, remain strong — whereas these ebbs and flows of enthusiasm can be rather transient. But sometimes the short run matters, and on health care reform at least, this is one of those times. Unfortunately for Democrats, I don’t think there are any easy answers. It’s almost certainly not as simple as flipping a switch, or mobilizing OFA, and re-activating the enthusiasm we witnessed during the campaign. Which is not to say that Democrats shouldn’t try. But their leadership ought to be prepared for the eventuality that they will lose the shouting match — and will still need to find a way to win the war.