As more and more millennials enter the workforce, companies are scrambling to figure out how to retain their younger employees. Or at least so says The Wall Street Journal, which is the latest contributor to a long line of stories in many outlets about a generation that, as the Journal puts it, “won’t stay put in a job for long.”

As the millennials say: I can’t even with this.1

The myth of the job-hopping millennial is just that — a myth. The data consistently shows that today’s young people are actually less professionally itinerant than previous generations. In fact, millennials — and the U.S. economy as a whole — would be better off if they’d live up to the stereotype and start switching jobs more often.

To support its case, the Journal (where I was a reporter from 2006 to 2013) cites Bureau of Labor Statistics data showing that the typical worker aged 20 to 24 has been in their job for about 16 months. “For those aged 25 to 34, it was three years,” the Journal continues, “still far short of the 5.5-year median tenure for all workers age 25 and over.”

More importantly, comparing today’s 20-somethings to today’s 30- and 40-somethings misses the point. Younger workers do tend to change jobs more often than older workers, but that’s always been true. Numbers on job tenure for Americans in their 20s were almost exactly the same in the 1980s as they are today. Monthly data tells a similar story, as the chart below shows: Every month, about 3 percent of young workers (defined here as those between 22 and 29) change jobs, compared to about 4 percent in the mid-1990s. 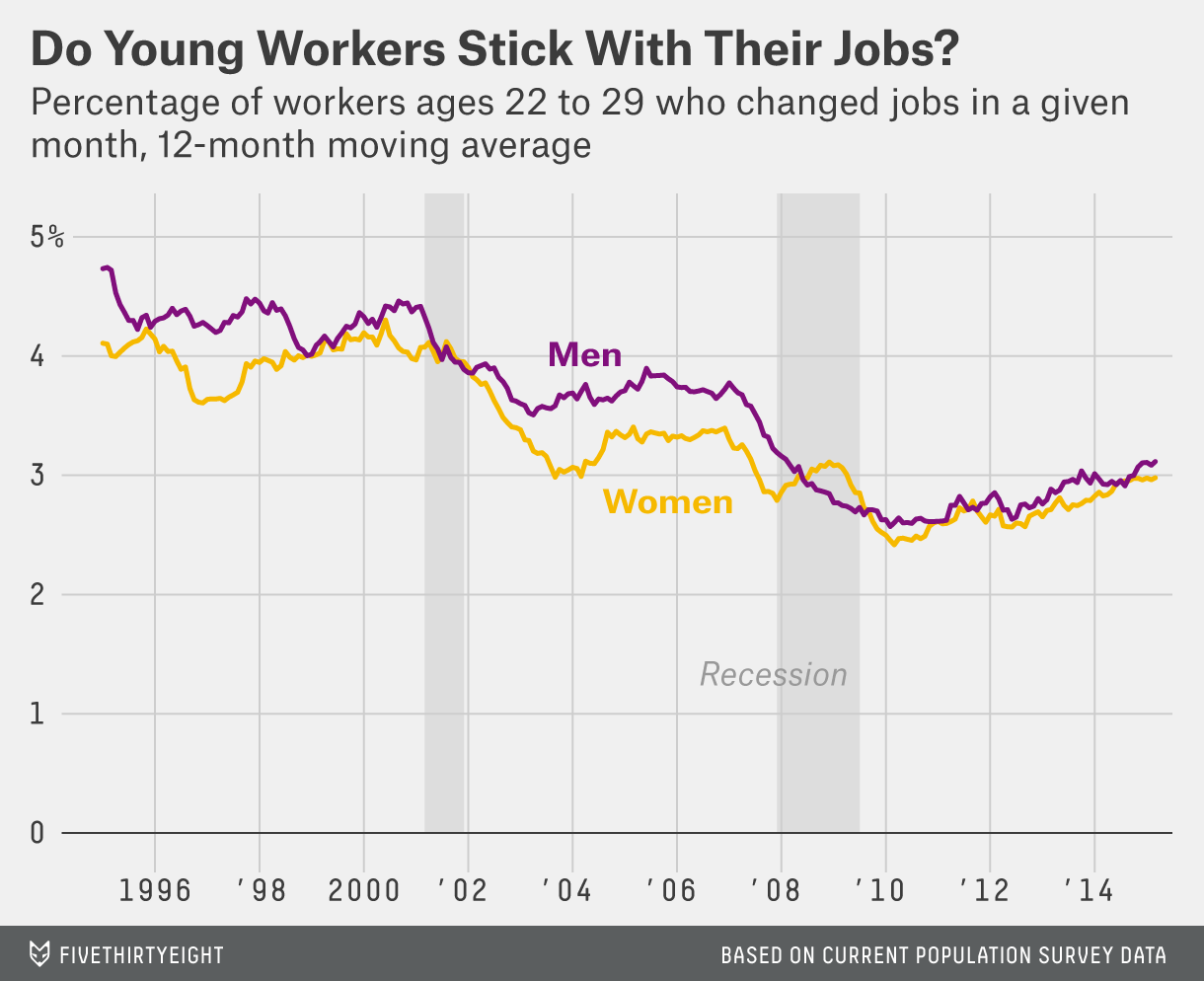 So why do we hear so much from employers about turnover among young workers? For one thing, there are a lot of them. Depending on where exactly you draw the line between generations, millennials are either already the largest generation currently in the workforce or soon will be. We hear a lot about the graying of the labor force, but it’s more accurate to say that the U.S. labor force is polarizing: lots of older workers, lots of younger ones, and fewer people in the middle. That’s a legitimate managerial challenge.

Another reason employers might be nervous: Millennials really are changing jobs more often than they were a few years ago. As the chart above shows, job turnover bottomed out in the midst of the recession, when hiring was slow and anyone lucky enough to have a job was reluctant to give it up. Turnover has rebounded since then, although it remains well below historical levels.

That’s a headache for employers, but it’s good news for employees. Changing jobs is a key way for workers to make more money. That’s especially true for younger workers, who often need to move around to find the job that suits — and pays — them best. By entering the workforce during a period of prolonged economic downturn, today’s young people missed out on years of potential wage gains, a setback from which they might never fully recover.

In other words, we shouldn’t worry that millennials are changing jobs too often, but rather, as the Washington Post’s Jonnelle Marte has written, that they aren’t changing jobs enough.