The March labor numbers are out from the Bureau of Labor Statistics and, at first glance, they look pretty good: 162,000 net new (nonfarm) jobs, and the national unemployment rate holding steady at 9.7 percent. 538’s Hale Stewart will have more on this subject in the near future, but for today let’s just set out the good and bad news in the latest jobs data. 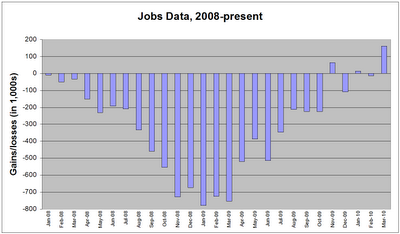 The good news, of course, is that the economy added any jobs. Against the backdrop of the pattern during the past two years, which is depicted above and resembles an inverted bell curve during the year leading up to Obama’s inauguration and the year afer his inauguration, 162K new jobs is generally encouraging. And those 162K jobs added in March were the most added since three years ago, in March 2007. (This month’s and last month’s data are still preliminary and as-yet uncorrected, so the 162K could be adjusted.) And the 9.7 unemployment holding steady, as it did for the third month in a row, is at least not bad news.

Of course, the economy needs to add about 150,000 jobs just to keep up with growth of the working-age population, which is why 162K is basically a break-even figure. Moreover, about a fourth of the new jobs are temporary, many of them courtesy of the federal government’s hiring of Census-takers.

The worse news is the share of unemployed persons who are long-term unemployed, defined as having been unemployed for more than six months (27+ weeks). That percent looked like it had capped out in January 2010 at 41.2 percent, dipped slightly in February to 40.9 percent, but jumped in March to 44.1 percent. These figures are all seasonally adjusted, so they account for payroll drop-offs that occur naturally at the end of summer or as the drop in temperature forces certain types of employment to cease for winter. By comparison, the seasonally-adjusted long-term unemployment share a year ago, in March 2009, was 24.6 percent. (For details, see Table A-12, p. 23, here.)

Meanwhile, involuntary part-time workers jumped from 8.9 million to 9.1 million, and the unemployment rate for African Americans continued to rise. “The overall picture here is not very positive,” writes liberal economist Dean Baker. “While we are seeing job growth it is at a very slow pace. The average in the private sector over the last two months was just 66,000 jobs. With the public sector shedding jobs, we will need more rapid job growth just to stay even with the growth in the labor force.”

Not surprisingly, House Minority Leader John Boehner pounced, issuing a statement saying, “A 9.7 percent unemployment rate is no cause for celebration, and any politician who takes a victory lap for it is out of touch with the struggles working families and small businesses asking ‘where are the jobs?’ are facing.” And, not surprisingly, he pinned the blame on what he believes is a failed stimulus bill. “Today’s private-sector job gains are encouraging but not nearly what President Obama promised when he signed the trillion-dollar ‘stimulus’ into law last year with promises it would keep unemployment below eight percent and create jobs ‘immediately.’ Our economy has lost more than three million jobs since then and unemployment remains near ten percent.”