With the seating of Al Franken and the switch of Arlen Specter, the Democrats have 60 percent of the 100 U.S. Senate seats, plus a solid 59 percent majority of U.S. House seats. Not bad, right?

But an oft-overlooked story is the considerable growth of late in the Democratic share of state legislative seats. 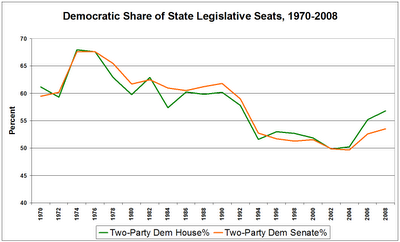 When was the last time the Democratic state legislative shares were that high?

You guessed it: In 1992-93, prior to the 1994 “Republican Revolution” cycle. Before the rise of Newt Gingrich, the Democrats simply dominated the state legislatures–although, it must be said, many of those Democrats were southerners who, by contemporary national ideological standards, we might today call “DINOs”, or Democrats in Name Only.

Though I will be looking closer at state legislative partisanship data* on a regional level and even specific-state basis for a series of posts later this month, there are several things that can be said about the general trend and recent Democratic uptick:

1. Some of this improvement reflects larger partisan changes, to be sure, especially in response to growing Bush Administration dissatisfaction during the second half of this decade. But it also resulted from a significant commitment to downballot races by key elites ranging from former Democratic Legislative Campaign Committee chairman Mike Miller of Maryland in his official capacity, to pro-gay rights activist Tim Gill and cohorts acting on their own.

2. State legislatures are natural farm systems for higher office, particularly the U.S. House. So the recent gains portend a deeper Democratic bench in the future as House seats become open or competitive.

3. A lot of the recent Democratic gains are coming outside the South. (But more on that later.)

#Two notes on the reporting of the data: first, I calculated two-party shares to simplify the percentages, if at the expense of the occasional third-party or independent state legislator; and second, the data reflect partisanship as of January in the year following the election, and do not account for party-switchers, deaths, retirements, and so on that occur during the ensuing two-year period.