Pete Buttigieg’s decision to drop out of the race two days before Super Tuesday has hurt Sen. Bernie Sanders in our primary forecast. Sanders’s chances of winning a majority of pledged delegates fell from 28 percent to 23 percent. And the likelihood that no candidate gets a majority rose slightly from 59 to 64 percent. Former Vice President Joe Biden’s majority chances were unchanged. 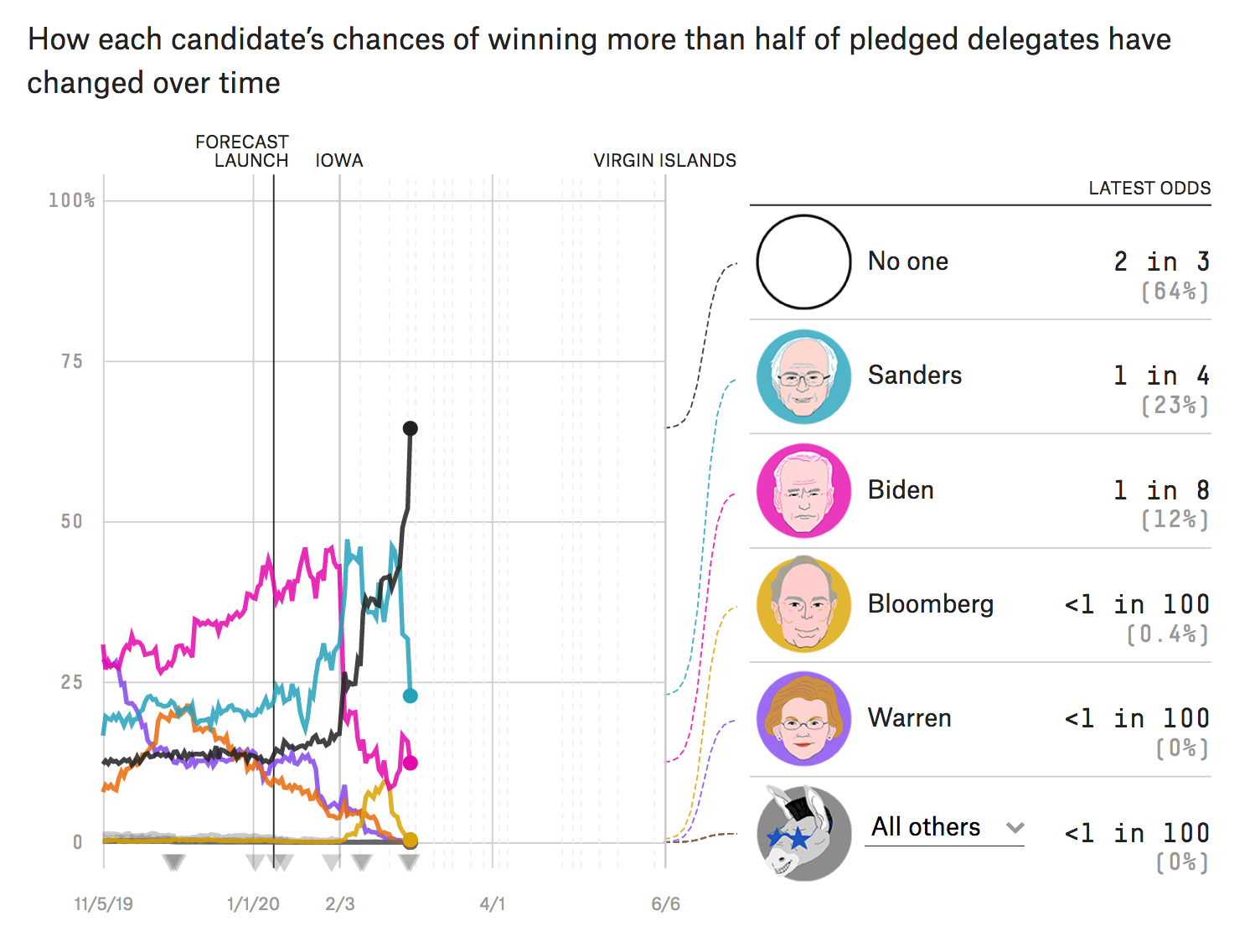 Sanders is still the favorite to win a plurality of delegates, but those chances dropped slightly too, from 63 percent to 60 percent, while Biden’s plurality chances increased from 34 to 36 percent.

Buttigieg himself had almost no chance of getting a delegate plurality or majority, according to the model, so these changes purely reflect the effects that his dropping out has on the other candidates.

At first glance, this might seem counterintuitive. How does a candidate dropping out increase the likelihood of no majority? Shouldn’t it clear the field up and make it easier to achieve a majority?

The key is in how the Democrats’ delegate math works. The rules require candidates to receive at least 15 percent of the vote, typically, to win delegates statewide or at the district-level.

Buttigieg was projected to get under 15 percent in the vast majority of states and districts on Super Tuesday. Thus, his votes were essentially wasted. Redistributing his votes to other candidates will help them to meet the 15 percent threshold, however. In particular, Sen. Elizabeth Warren and former New York Mayor Michael Bloomberg were both close to the 15 percent line in many states or districts. So even an extra percentage point or two would help them get over that line in more places. For instance, both Bloomberg and Warren were projected to finish with an average of 14 percent of the vote in California before Buttigieg’s dropout. Now, they’re forecasted for 16 percent instead.

Biden was also projected to finish under 15 percent in some states and districts — so Buttigieg’s dropout helps him out also in a few places. Biden went from a projected 14 percent of the vote to 16 percent in Minnesota, for example.

Conversely, Sanders was already projected to get 15 percent almost everywhere. So although he will pick up a few Buttigieg voters, they don’t necessarily translate to more delegates.

How does our model decide where to assign Buttigieg’s voters? As described here, we use a series of priors based on the positioning of the candidates on ideological and other dimensions. These are not purely based on left-right ideology either. For instance, the model recognizes that both Buttigieg and Warren tend to appeal to college-educated voters, and thus they share some voters despite their ideological differences.

The model also considers the overall popularity of each candidate. So because Sanders is currently the most popular Democrat in the field, he’s likely to pick up some of Buttigieg’s support too.

Overall, the model has Buttigieg’s support being divided relatively evenly between Warren, Biden, Bloomberg, Sanders and — in the places where she’s strong — Sen. Amy Klobuchar. That seems broadly in line with polls, which are somewhat inconsistent about where Buttigieg’s support will go.

Of course, neither the model nor previous polling of the race consider the context in which Buttigieg dropped out, which comes amidst an increasing effort by moderate Democratic voters and party leaders to get behind Biden. If his voters take Buttigieg’s dropout as a signal that they should switch to Biden, there’s more upside for Biden than our model implies.

And overall, Buttigieg’s dropout contributes to the uncertainty surrounding what will happen on Super Tuesday. There were already a lot of challenges in assessing the current state of the race following Biden’s dramatic surge in South Carolina — but this adds yet another complication. Although the model may point in broadly the right direction — this is not great news for Sanders — this is one of those times when we mostly just have to wait and see what happens.