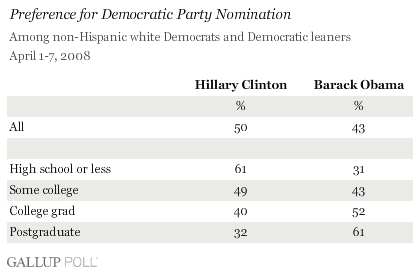 This is what we were talking about the other day. There is fully a 60-point swing between non-Hispanic white Democrats with no college education (who prefer Hillary by 30 points) to those with postgraduate educations (who prefer Obama by 29 points). The education gap is more substantial than the gender gap, the income gap (which may be entirely an artifact of the education gap), the white-Latino gap (ditto), or the age gap (although, the latter is close), and anything but the black-white gap. And it may be the most important of any of these “gaps” insofar as carrying over to the general election.

I still want to emphasize that this is neither inherently a good thing or a bad thing for either candidate. Hillary both does better than your usual Democrat among low-education voters and does worse than your usual Democrat among high-education voters. If the former were true but not the latter, she’d have wrapped up the nomination by now. If the latter were true but not the former, Obama would have wrapped up the nomination in February.