Congress has less than a month to hammer out a deal on the next round of stimulus before expanded unemployment benefits expire. State and local governments are starting to feel the pinch of budget shortfalls. And while the U.S. got a piece of (relatively) good news in last week’s jobs report, which featured an unemployment rate 2.2 percentage points lower in June than it had been in May, the economy has been thrown back into chaos in the meantime, with a number of states pulling back on their reopenings amid spiking COVID-19 infections and hospitalizations.

Our newest survey of economists highlights just how consequential governmental decisions over the next month may be: On average, these economists think that a refusal by Congress to extend unemployment benefits or bail out state and local governments is just as likely to hurt the economy as local economies staying open in spite of COVID-19 spikes — or even closing because of the virus.

In partnership with the Initiative on Global Markets at the University of Chicago Booth School of Business, FiveThirtyEight asked 31 quantitative macroeconomic economists what they thought about a variety of subjects around the coronavirus recession and recovery efforts. The most recent survey was conducted from July 2 through 6, which means the June jobs report was fresh on respondents’ minds — but so was the state of the pandemic, along with challenges ahead for lawmakers.

“There’s a distinct risk that between now and November, Congress’s ability to continue fiscal support will be very limited by election-year politics,” said Jonathan Wright, an economics professor at Johns Hopkins University who has been consulting with us on the design of the survey. “That could be more of a drag on the economy than the local and state shutdowns just because the effect would be so huge.”

With a congressional showdown looming, we asked the experts to estimate the probability that several policy decisions would have the biggest negative impact on U.S. gross domestic product in the fourth quarter of 2020. Among the five options we presented, the single most important to the economists was a decision by state and local governments to reclose their economies because of COVID-19 outbreaks. But a decision by Congress not to provide funding to state and local governments was close behind. And the weight given to choices made by the federal government — bailing out local governments, extending unemployment insurance and providing ongoing aid for small businesses — added up to be even more important when taken as a whole:

“[State and local governments] are facing severe budget crises and will be laying off workers to balance their budgets,” said Julie Smith, a professor of economics at Lafayette College. That, she said, could lead to longer periods of high unemployment and financial pain for many households. Meanwhile, she added, cutting back or ending the federal unemployment extension would cause many people’s incomes to decline dramatically, leaving them with much less money to spend — which could make a big dent in GDP.

Perhaps for this reason, there’s a lot of uncertainty in the economists’ fourth-quarter real GDP predictions. When we last asked the panel for its forecast, it thought that GDP would be growing by 4.1 percent at the end of the year, a big improvement from the -28.2 percent quarter-over-quarter annualized growth it foresaw for the second quarter of 2020. This time around, the panel is calling for less negative growth (-25.5 percent) in the second quarter and a very similar fourth-quarter growth rate to last time (3.8 percent). But the range around that end-of-year forecast has gotten a lot wider — a sign of just how much things could go wrong. The gap between our consensus forecast’s 10th and 90th percentile predictions for fourth-quarter GDP growth was 10.9 percentage points in the last survey; now that gap is 12.8 percentage points, with almost all of the extra uncertainty coming in the form of downside risk. (The panel’s consensus 10th percentile GDP growth forecast has dropped from -2.0 percent to -3.5 percent.)

[Related: Voters Who Think The Economy Is The Country’s Biggest Problem Are Pretty Trumpy. That Might Not Help Him Much.]

The economists weren’t especially optimistic about the trajectory of the unemployment rate over the course of 2020, either. The consensus prediction was that the unemployment rate in December would be 10.1 percent, which is only 1 percentage point lower than the rate in June — and is still comparable to the unemployment rate at the height of the Great Recession. Stephen Cecchetti, a professor of international finance at the Brandeis International Business School, pointed out that workers are increasingly likely to be losing their jobs permanently, rather than temporarily, which will make it harder for them to get back into the labor force. And he added that it will take time for the economy to adjust to a new reality where working from home is the norm, which could also keep the unemployment rate from falling quickly. Cecchetti was also among the economists who thought that in a worst-case scenario, the unemployment rate could skyrocket again by the end of the year.

“There are a lot of people who haven’t been exposed to the virus,” he said. “It’s not hard to imagine new outbreaks in places like New Jersey or Massachusetts that force us to shut down all over again.” 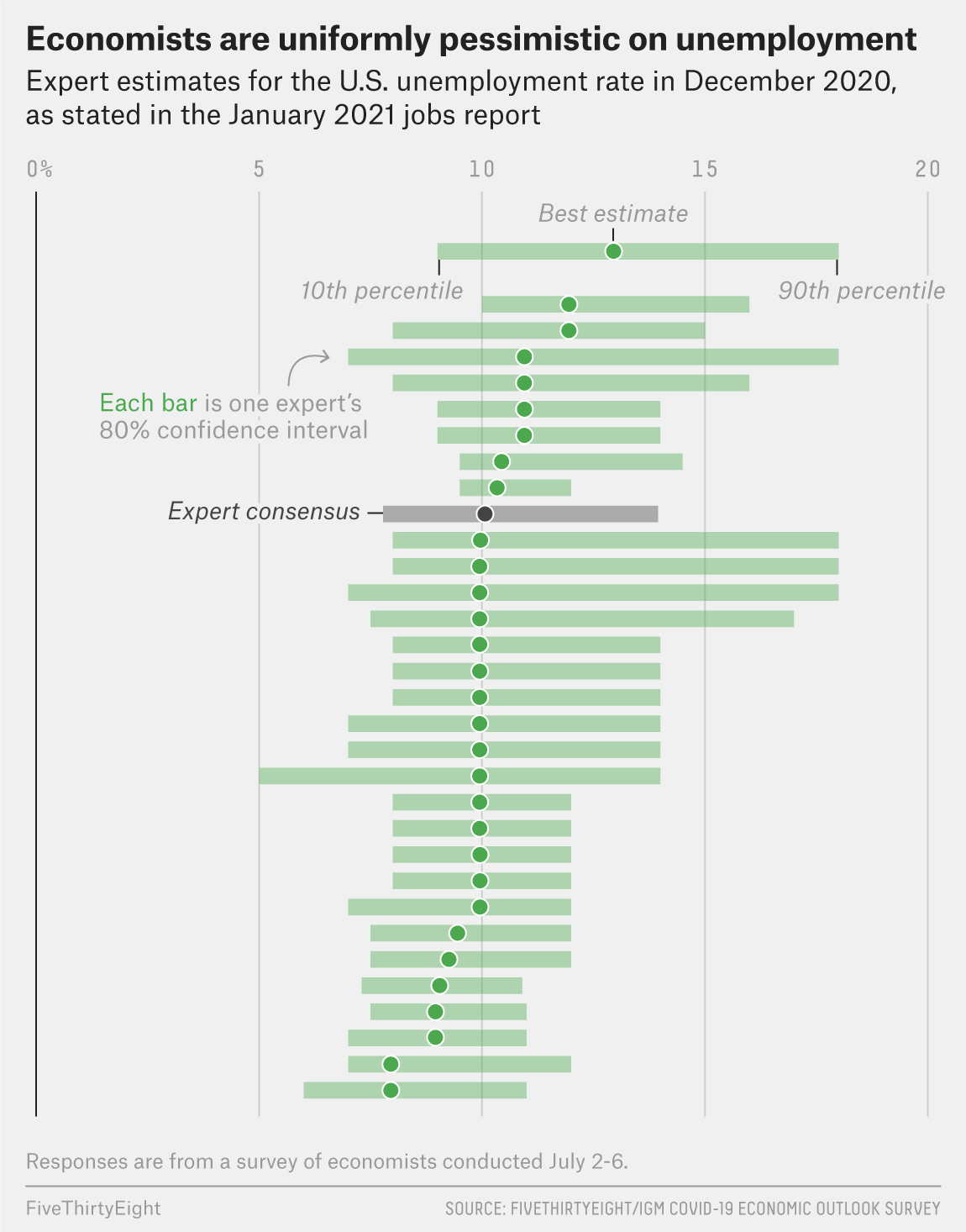 About half of the economists in the survey also thought the country’s top earners would end the year with an even greater share of the nation’s personal income. In order to get a sense of how much the panel thought the COVID-19 recession would increase income inequality, we asked about a new metric created by the Bureau of Economic Analysis, which found that in 2016, households in the top 10 percent of incomes (adjusted for household size) accounted for 37.6 percent of the country’s personal income. Fifty percent of the respondents thought this number would be significantly higher by the end of 2020 as a result of the COVID-19 pandemic, while 47 percent thought it would be about the same. Only one respondent thought it would be lower.

“My best guess is that this pandemic is going to worsen income inequalities,” said Sarah Zubairy, a professor of economics at Texas A&M University. She hypothesized that this was because job loss has been concentrated among lower-wage workers who can’t do their jobs remotely, and who may find themselves ricocheting in and out of the labor force if states have to abruptly pull back their reopening plans.

[Related: The Economy Is A Mess. So Why Isn’t The Stock Market?]

And in another sign that the U.S. has been knocked off course by the virus — and the subsequent leadership response — our survey panel overwhelmingly believes (with 90 percent agreement) that China will beat both America and the European Union on the road back to pre-crisis real GDP levels. In retrospect, according to Wright, this was kind of a “no-brainer” because China’s economic growth so far has been quite swift, and it has tools to enact sweeping fiscal stimulus that aren’t available to less centrally controlled economies like the U.S. or the E.U. But some of this might also be based on the Chinese government’s reputation for — how should we put this? — releasing overly favorable public data. “When all is said and done, if they don’t like the actual data they can fudge the numbers,” Wright said. “Put those three things together, and there’s almost no way they can’t be the first back.”

Wright also pointed to another ominous result in the survey: 19 percent of respondents thought that the 10-year average real U.S. GDP growth rate would be reduced by 1 to 2 percent per year. To be sure, the vast majority (77 percent) of economists thought the 10-year average growth rate would be reduced by less, although only one person thought it would go up. But the responses were still alarming, Wright said, because they indicated a serious degree of pessimism about the speed with which the economy will not just return to where it was at the end of 2019, but also catch up with where it would have been if the COVID-19 pandemic hadn’t happened.

[Related: In 2008, Everyone Thought The Recession Was Bad. But in 2020, Many Americans’ Views Depend On Their Party.]

However, Allan Timmermann, professor of finance and economics at the University of California, San Diego — who has also been consulting with us on the survey — was encouraged that the majority of respondents didn’t expect more long-term damage to growth. “This is still a large impact in terms of its cumulative effect on the economy,” he wrote in an email. “But it does suggest that most respondents think the economy will bounce back in due course — as opposed to leading us to a ‘lost decade’ scenario (as we have seen in Japan) with growth slowing down by an even larger amount.”

Overall, though, the latest survey responses paint a picture of America’s still-precarious road back to economic health. So much depends on the course of COVID-19 itself and how much the virus forces local economies to shut down again to slow its spread. But a lot is also riding on important policy decisions around the virus, which are still being debated. “I think economists have been surprised so far by the pace of the rebound,” Wright said. “But that hasn’t made them less worried about the weeks or months ahead.”