I’ve generally been of the view that the earlier that the Republican primaries and caucuses begin, the better off Mitt Romney’s campaign will be.

This is a pretty straightforward case: Mr. Romney is a well-prepared candidate and leads the field right now according to most polling and non-polling indicators. It isn’t a very large lead, and as Chuck Todd notes, I’d be a little bit careful in anointing any candidate with the “inevitability” label when he’s still polling at just 20 or 25 percent. But it’s a lead nevertheless, and the sooner the voting begins, the less chance there will be for another candidate like Gov. Rick Perry to gain a firmer footing as his campaign gains experience. (Earlier voting dates have also made it much harder for additional candidates like New Jersey Gov. Chris Christie to enter the race.)

Mr. Romney’s campaign evidently agrees with this thinking: it pushed for an earlier date for the Nevada caucuses, according to reporting by the Las Vegas Review-Journal and the Des Moines Register, which were recently moved to Jan. 14 from Feb. 18.

But there is one potential wrench the works — which could cause the plan to blow up on Mr. Romney and harm his chances of winning the nomination. That is if New Hampshire were to move its primary date all the way up to December, as New Hampshire secretary of state Bill Gardner has threatened to do in response to the moves made by Nevada and other states.

New Hampshire’s laws require that the state’s primary be held on a Tuesday, that it occur before any other primary (but not necessarily any other caucus), and that there is a full week’s buffer between it and the next nomination contest. The latest date that would meet these rules is Dec. 27, 2011. But that date, as well as Dec. 20, would come too close to the Christmas holiday, so Mr. Gardner has instead suggested dates of Dec. 6 or Dec. 13.

This would leave New Hampshire as something of an orphan on the schedule. Holding its primary on Dec. 6, for instance, would leave a four-week gap between it and the Iowa caucuses on Jan. 3, during which time much egg nog would be consumed and much of the momentum from the contest might be lost. Some research suggests that the “bounce” from winning an early primary, while it can be significant, tends to evaporate relatively quickly.

Meanwhile, although the first four or five states have moved up their dates, the primary calendar is still fairly back-loaded overall. Based on the dates listed at Josh Putnam’s excellent Web site, Frontloading HQ, the bulk of primaries and caucus are not taking place until March or later, with some important contests like California and New Jersey not scheduled until June. 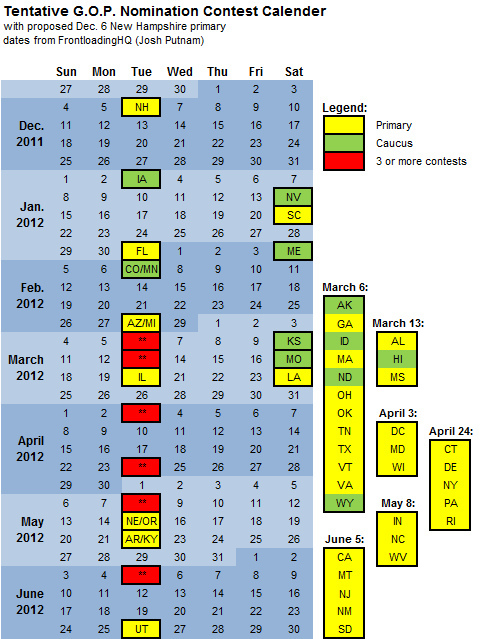 So chances are that a December date would diminish the importance of New Hampshire from an electoral perspective, both because it is so disconnected from the rest of the calendar and because Mr. Romney’s rivals might have more of an excuse for a poor performance there. Candidates like Mr. Perry and Herman Cain could cite the difficulty of competing in New Hampshire on a compressed schedule, and against a candidate in Mr. Romney who has a residence in the state and is something of a native son. The news media, annoyed that the earlier date would require them to revisit their own plans for the campaign, might be happy to play along. It’s hard to know exactly how the spin war would unfold, but it’s possible that New Hampshire could come to be regarded as something of a curiosity or even a beauty contest.

Now consider how these scenarios might play out given the rest of the calendar. First, imagine that we had a schedule like in 2008, with Iowa voting in the first week of January and New Hampshire about a week later. A loss in Iowa would not be good news for Mr. Romney — particularly given that in the past, New Hampshire has shown something of a penchant for underdog, up-and-coming candidates. Still, New Hampshire would represent a hedge or buffer for Mr. Romney, and a win there would allow his campaign to recover from any loss in momentum.

If New Hampshire were already to have voted in December, however, the sting of a poor performance from Mr. Romney in Iowa could linger. While the next voting contest — Nevada on Jan. 14 — would still be a relatively good one for Mr. Romney because of the high number of Mormons there, he’d be more likely to enter the contest with unfavorable rater than favorable momentum. By the time Nevada voted, and South Carolina voted the following week, any gains Mr. Romney might have made by winning New Hampshire in December would long have been forgotten about.

Fortunately for Mr. Romney, there is a relatively elegant solution to this problem. Although Mr. Gardner has threatened the “nuclear option” of moving his state’s primary to December, he ultimately isn’t asking for all that much. If Nevada moved its caucus date to Tuesday, Jan. 17 from Saturday, Jan. 14 — just a 72-hour shift — New Hampshire’s statutory requirements would allow it to slot in on Jan. 10, giving us a January calendar that very much resembled the one we had in 2008.

If Mr. Romney’s campaign had significant enough influence on Nevada to compel it to move its caucus to January in the first place, it might now benefit from encouraging the state to comply with Mr. Gardner’s demands and move its caucus back a few days.