The early Democratic front-runner in recent New York City mayoral races has a near perfect record in going on to win the party’s nomination, according to an analysis of public opinion surveys conducted since 1989. If that pattern holds true in this year’s race, Speaker Christine C. Quinn of the City Council will very likely win the Democratic nomination in September. She has led in every primary poll conducted in 2013.

In five of the past six Democratic primaries for mayor, the candidate who led in an average of polls conducted in the first six months of the election year advanced to the general election. The only exception was in 2009, when then-Representative Anthony D. Weiner led William C. Thompson Jr., the New York City comptroller, by five percentage points but decided not to formally enter the race.

Beyond Mr. Weiner in 2009, every early front-runner included in at least 20 percent of surveys has won the Democratic nomination since 1989, which is as far back as FiveThirtyEight’s database of New York City mayoral polls goes. (Republican primaries in New York City have been less crowded and less competitive than Democratic races, and Republican polls have been more scarce.)

There were some close calls. In 2001, Fernando Ferrer, who was the Bronx borough president, nearly came from behind to defeat Mark Green, who was the New York City public advocate. Though Mr. Green had a lead of 10 percentage points over Mr. Ferrer in an average of early polls, Mr. Ferrer placed first in the primary. But Mr. Ferrer got just 36 percent of the vote, requiring a runoff election. (In New York City mayoral primaries, if no candidate earns at least 40 percent of the vote, an automatic runoff is held between the top two finishers.) Mr. Green won the runoff, 60 percent to 40 percent, and advanced to the general election.

While the early front-runner virtually always secures the nomination, underdogs have leapfrogged other candidates to finish in the top tier (although never to win). In 2005, Mr. Weiner was barely in double digits in the first 15 polls of the year, but secured 29 percent of the primary vote, finishing in second place. In 1997, early surveys showed the Rev. Al Sharpton with just 9 percent of the vote, but he, too, went on to finish second in the primary, winning 32 percent of the vote.

What does all this tell us about this year’s mayoral race?

Ms. Quinn has a lead of 17 percentage points in an average of the seven primary polls conducted so far this year. But her level of support has fallen from just under 40 percent early in the year to the high 20s in the most recent Quinnipiac and Marist polls, which included Mr. Weiner. 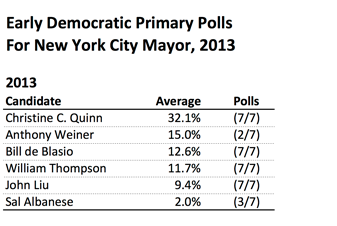 Ms. Quinn is also only one of four Democratic candidates polling in double digits, along with Mr. Weiner; Bill de Blasio; the city public advocate; and Mr. Thompson. John C. Liu, the city comptroller, is close behind at 9 percent.

No Democratic candidate has reached the 40 percent mark in any of the polls conducted this year, which points to the likelihood of a runoff election.

The last time four Democratic candidates had double-digit support in early polls, in 2005, the primary winner, Mr. Ferrer, avoided a runoff by a hair, just 0.2 percentage points. Four years earlier, in 2001, when five candidates were polling in double digits, Mr. Green and Mr. Ferrer ended up in a runoff.

So, if the historical precedent holds, Ms. Quinn is likely to win the Democratic nomination, even if she has to face a runoff election first.