If you’re Indiana or West Virginia, you’re probably feeling pretty good right now. Your usually-irrelevant primary just got a week’s worth of national attention, and you had Democrats criss-crossing you from border to border. But guess what? You’d still rather be Iowa.

Below is a listing of the number of events that were scheduled in each state by one of the two leading Democratic candidates, as according to the Washington Post candidate tracker. A caution: there is no such thing as an official register of events, and one of the campaigns (Hillary Clinton’s) tends to be much more aggressive than the other about publishing their schedule, including events run by the EX-POTUS or the DOTEXPOTUS. Nevertheless, this will have to suffice.

The number of events is divided by the number of delegates that were at stake in that contest. There were, for example, 2.52 events for every delegate in Nevada, but just 0.12 for every one in New Mexico. 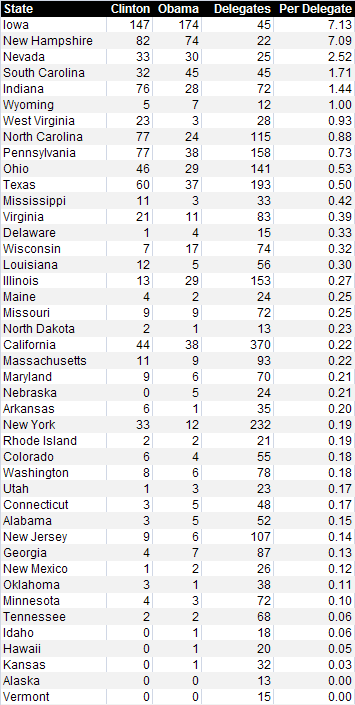 It would probably be more useful to sort these in the order that the primaries took place: 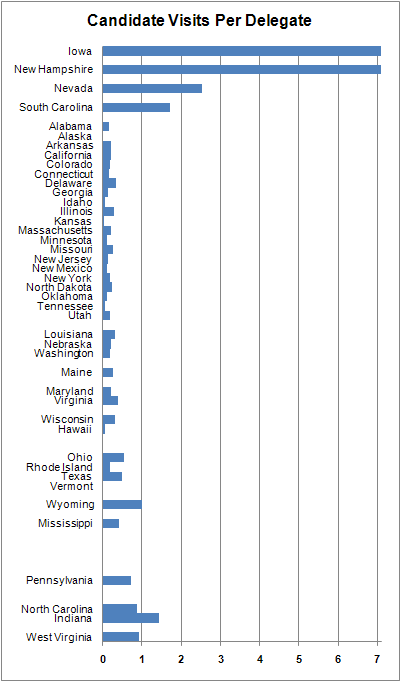 Iowa and New Hampshire absolutely blow everything else way, with more than 7 candidate visits per delegate — and that’s not even counting all the mileage accumulated in those states by candidates who since dropped from the race. And the next two states on the docket, Nevada and South Carolina, were well ahead of anything that came afterward, although Indiana came somewhat close. The Super Tuesday states, on the other hand, collectively screwed themselves over.

If we were doing this more scientifically, we might need to account for some kind of diminishing returns. Barack Obama’s 12th visit to Bettendorf, Iowa probably wasn’t going to make as much difference as his first. Nevertheless, there is a huge benefit to going early, which is why Michigan and Florida gambled (and lost). On a per-delegate basis, there was about 11 times as much candidate attention paid to Nevada as to California.