The Grand Canyon is a safe place to visit. I’d trade the dangers of most highways for the security of a well-mapped hole in the Earth anytime. In the 1990s, the National Park Service reported that there were 43.5 million visitors to the Arizona landmark (that number includes repeat visitors). During the same decade, according to Michael Ghiglieri and Thomas Myers’s immaculately named and encyclopedic account of canyon fatalities, “Over the Edge,” 117 people lost their lives at the canyon. In the 1990s, Mount Everest took half as many lives with a tiny fraction of the number of visitors.

So, there’s little risk for canyon visitors, but have the deaths there really been from people going over the edge? It’s a question born mostly of morbid curiosity, but it has some relevance: We’re in the middle of July, a prime month for summer travel, and — unsurprisingly — people are flocking to the canyon. During the past decade, Grand Canyon National Park has seen an average of 4.4 million visitors annually. And as the chart below shows, July is the peak month for those visitors. 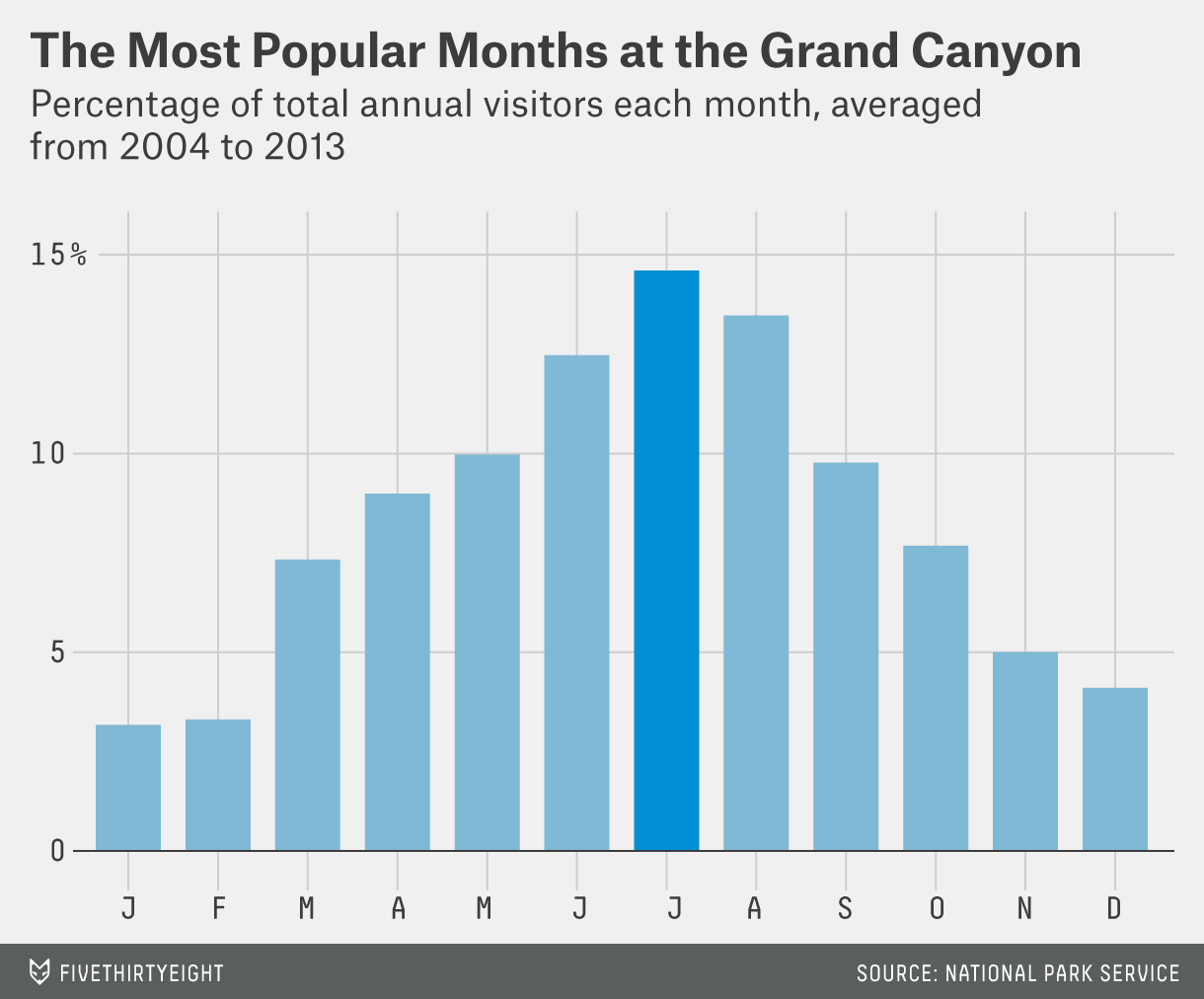 What about the canyon’s deadliest month? Again, drawing on data compiled by Ghiglieri and Myers, which runs to 2008, I plotted fatalities by month, excluding plane crashes. The chart below shows that fatalities generally rise in the summer, when there are more visitors. But it also shows a curious dip in July. The busiest month isn’t the deadliest. 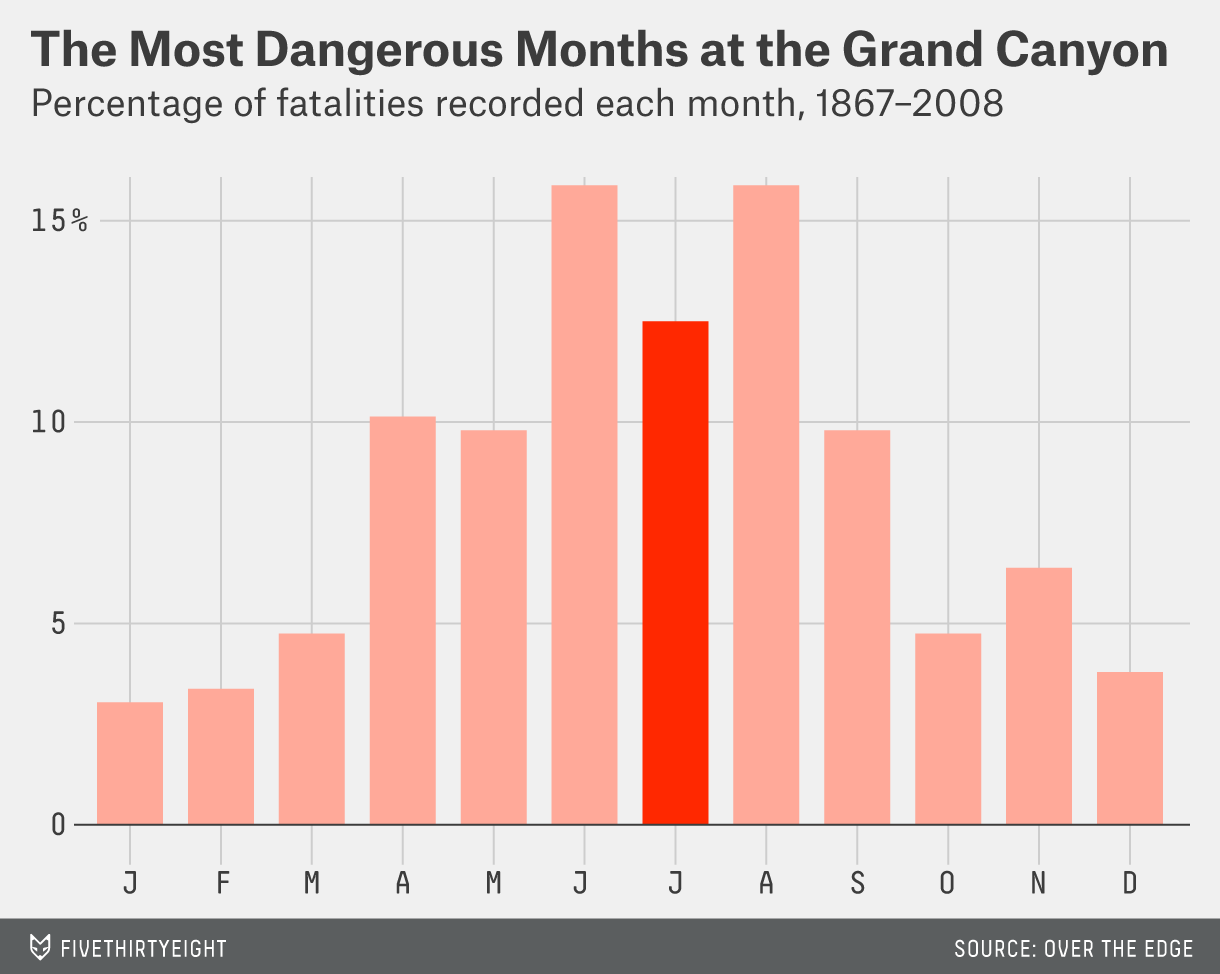 When people think about danger in the Grand Canyon, they naturally think about what everyone’s mind focuses on when standing near a cliff: falling. (Well, maybe everyone except Nik Wallenda, who apparently sees a great place for a mid-wire stroll.) Falls are very rare, though. The 108 fatal falls recorded in “Over the Edge” account for nearly 34 percent of the canyon’s recorded fatalities from 1867 to 2008, even after setting aside plane crashes. And there’s good reason to set aside those crashes, because the 375 recorded plane crash fatalities were clustered into a few months. Plane crashes were also responsible for the single deadliest day in the canyon’s history, when two off-course commercial airliners crashed over the canyon in June 1956.

Heat, however, has also been a real danger: Almost 25 percent of recorded deaths (again, excluding plane crashes) have been due to the environment and mostly heat (a few are cases of hypothermia). The heat could also explain the curious dip in deaths in July. When people hike a mountain, they start by going up, so the hardest work comes first. In the Grand Canyon, it’s the reverse: Hikers head down to start, dropping significantly more than a mile of vertical distance before reaching the Colorado River. It’s also much hotter in the canyon than on the rim. In fact, the average temperatures in the inner canyon can get above 100 degrees in the summer, while they remain much more comfortable thousands of feet above. So it can be all too easy for hikers to find themselves deep in the canyon, with too much heat and not enough water. In July, though, even the rim might get hot enough to dissuade people from pushing themselves beyond their limits. At least that was my first thought about the drop in fatalities in July.

At face, it seems like a plausible explanation. Using the data from “Over the Edge,” more people have died because of heat exposure and the environment in May (14) or June (16) than July (11) or August (eight).

But there’s another explanation for any pattern here: the chance variation that comes with small sample sizes. (In this case, we are really, really grateful the sample sizes aren’t any bigger.) To get at that, I ran 10,000 simulations assuming that each visitor has an equal (and very, very low) chance of becoming a fatality statistic. It turns out that in 31 percent of those simulations, the share of all fatalities in July is even less than the 12.5 percent we actually observe. So yes, it could be chance alone.

But if I were hiking in the canyon, I wouldn’t chance running out of water all the same.