Sure, Drake released his fourth mixtape, “If You’re Reading This It’s Too Late,” in early February — which sold almost half a million copies in three days — and followed it with “What a Time to Be Alive” in September, a co-production with Future that debuted at No. 1 on the U.S. Billboard 200. And he found time to drop some of the year’s top tracks, “Hotline Bling” and “Back to Back,” before capping off 2015 as the world’s most-streamed artist on Spotify.

But while Drake was busy beefing with Nicki Minaj’s fiancé, she managed to top him in one of the key arenas of success in hip-hop: as a guest artist. Minaj carried the track on David Guetta’s global sensation “Hey Mama,” which remained atop the Billboard Hot 100 for the better part of the summer. She also graced Meek Mill’s “All Eyes on You,” dabbled in some pop over on Robin Thicke’s “Back Together” and closed out the year as Spotify’s Top Female Artist in the U.S.

During the year of peak Drake, we could see the effect of his Midas touch in guest appearances on other artists’ tracks. But songs featuring Minaj as a guest artist were even more golden, according to Spotify streaming data from this year. Yes, the “Drake Effect” is real, but it’s time we start talking about the Nicki Effect.

That everything Drake touches turns to gold is a well-documented phenomenon in hip-hop. Drake’s addition to someone else’s track can take the song or artist from relative obscurity to mainstream hit. The Weeknd, iLoveMakonnen, Migos and Soulja Boy are just a few of the dozens of artists who have benefited from Drake’s coveted co-sign.

“A Drake feature is still one of the most powerful and valuable things that you can have in terms of that first look,” said Minya Oh, otherwise known as Miss Info on New York’s Hot 97 radio station, a cultural landmark for up-and-coming hip-hop artists. But just how powerful is it? And how does Drake compare to other artists?

Since it’s impossible to quantify cultural cachet (What’s the value of an Instagram nod? How much is Drake’s endless memefication worth?), I set out to try to measure this so-called Drake Effect using Spotify streaming data, one of the clearest indicators of success in today’s complicated music landscape.

From January through October of this year, a track featuring Drake as a guest artist was streamed 126 percent more often, on average, than any of the other tracks on the albums he was featured on. That means the Drake song (or songs) was played more than twice as much as the songs that didn’t feature Drake.

Ideally we could compare Drake’s guest appearances to those of all artists in Spotify’s database, but that would take months to query, so let’s start with his fellow Young Money friends Nicki Minaj and Lil Wayne.1 If the Drake Effect is really as big as everyone believes, then surely a comparison to a hand-picked sample of two other prolific guest artists would see Drake come out on top.

With the help of Spotify data analyst Jomar Perez, we pulled data on every album on Spotify with at least one track featuring either Drake, Nicki Minaj or Lil Wayne.2 In total there were 63 albums featuring Drake, 62 featuring Minaj and 192 (get it, Weezy!) that featured Wayne in our data set, going as far back as Spotify has data available.3 When we look at how often the songs on those albums were streamed this year, Nicki Minaj’s guest effect was even greater than Drake’s, with her guest tracks streaming on average 172 percent more often than the tracks without her. 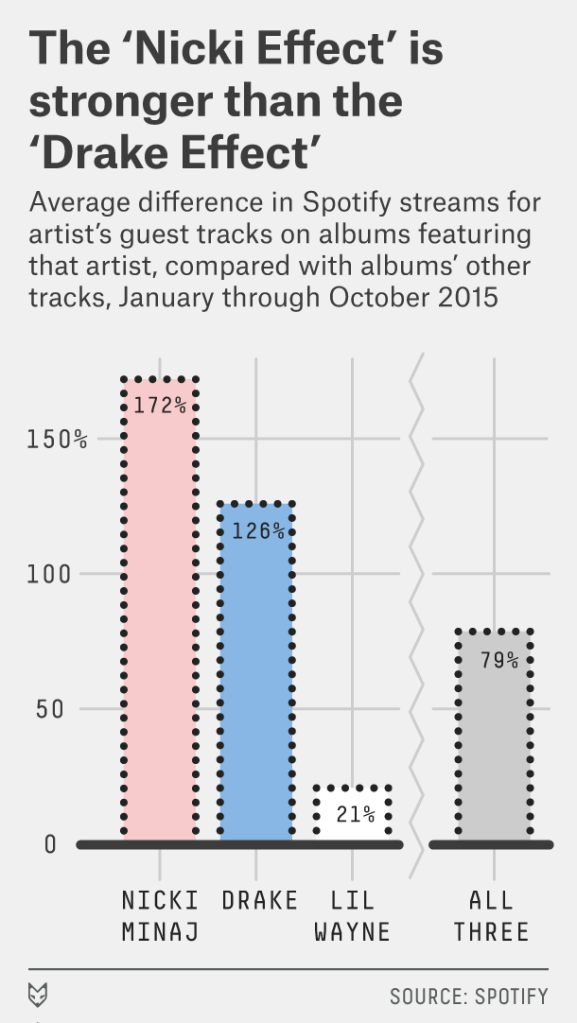 (Despite Wayne’s storied history, his guest-track heyday seems to have passed — he’s been out exploring other passion projects — so let’s focus on Nicki and Drake from here on out.)

Let’s get a few things straight: It’s safe to assume that if you’re bringing on a guest artist, you’re hoping to make a banger, which is not always true for every song on an album. So, to isolate the guest artist effect most accurately, we needed to compare those songs on an album featuring a guest artist to the other tracks on that same album with a similar level of popularity. Spotify ranked every song on an album by stream count and bucketed them into four groups: the top 25 percent, 25 percent to 50 percent, 50 percent to 75 percent, and 75 percent to 100 percent.4

Unsurprisingly, about 80 percent of both the Drake and Minaj feature tracks fell into the top two stream groups, i.e., the top half by popularity. In fact, there were fewer than 20 tracks for either artist in the bottom two groups (looking at you, Waka Flocka Flame, for “Round of Applause” with Drake, and at you, Madonna, for the unfortunate “B*tch I’m Madonna” with Minaj). With so few tracks, the lower two groups didn’t make for a very robust data set, so we chose to focus on the top two groups, where the featured artist’s influence would be the most apparent.

And at the top, the power of Nicki becomes even clearer.

For songs in the top quartile of streams, a Nicki feature was streamed 46 percent more often, on average, compared with 25 percent more often for Drake. But things get even more interesting in the second tier, where the Nicki Effect is a 55 percent increase but a Drake feature performed worse on average than the tracks without Drake across all albums in that same bucket. 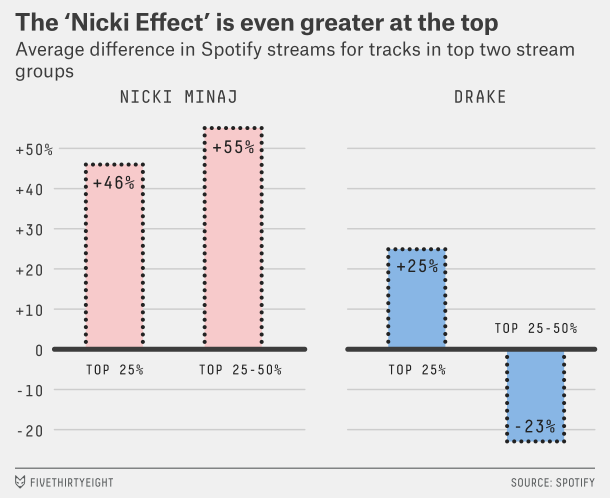 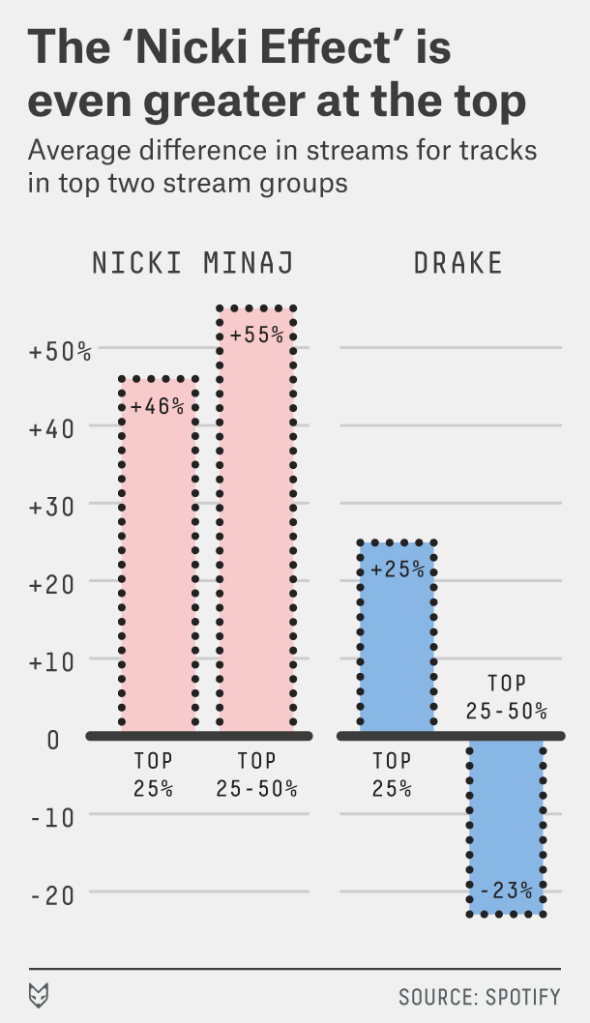 Now this reverse-Drake Effect in the second bucket might be due to a few things, according to Spotify, such as multiple versions of the same track (i.e., deluxe vs. regular) appearing in the data set or the same tracks appearing with varying names. But it should be noted that we would see these sorts of data quirks for Nicki’s songs, too, so Drake can’t explain away this negative effect based on data inconsistencies alone.

There’s another explanation: He’s on some legitimately bad songs! Drake was featured on the second part of Justin Timberlake’s 2013 comeback, “The 20/20 Experience: 2 of 2,” on a song called “Cabaret.” Not only does this song suck, especially when compared with some of that album’s best songs like “TKO” and “Drink You Away,” but the Drake verse has to be one of his worst.

In the past few years, Drake has moved away from guesting on superstar albums with the likes of Timberlake to instead seeking out smaller, more obscure artists from around the world — like SBTRKT, Sampha or Ramriddlz. While the politics of his co-opting are heavily debated, it’s worth noting that Drake’s approaches to guest appearances couldn’t be more different from Nicki’s.

“Nicki is engineering all of her collaborations to be successes, and Drake is engineering his to be successes in less quantifiable ways,” Oh said. While Drake seeks out underground artists from niche music circles, Nicki has little interest in anything that isn’t going to be hit, Oh said: “Her operating principle is, ‘Is this going to be a smash?’”

This only makes the Nicki Effect more impressive, though — her guest features account for an increase in streaming on albums that are already chock full of hits. On Justin Bieber’s “Believe,” the song “Beauty and a Beat,” which features Minaj, was streamed 70 percent more often than the rest of the the album’s top songs in the first 10 months of this year. Let’s not forget that Drake was on that album too — on “Right Here” — but his song was streamed 14 percent less often than the rest of the album’s comparable songs.

In fact, you’d expect Drake to have an even greater impact on lesser-known albums since they would presumably contain fewer hits. Future is not unknown anymore (thanks in part to Drake), but on his 2014 album “Honest,” Drake’s appearance on “Never Satisfied” was streamed 62 percent less often this year compared with the rest of the album’s best tracks.

Drake’s and Nicki’s difference in approach to guest tracks is even more apparent when you look at the biggest impacts they had in our data set. Nicki’s effect on a couple of massive hits — “Hey Mama” on Guetta’s “Listen” and “Bang Bang” on Jessie J’s “Sweet Talker” — was enough to trump all the smaller effects that Drake had this year. A Drake effect on something like “Drama” from Roy Woods’s “Exis” is relatively small and can’t compete with the combination of a Nicki effect with already existing star power.5

If you’re surprised that Nicki eclipsed Drake in the year of Drake, you shouldn’t be. Five years ago, Kanye West assembled one of hip-hop’s greatest guest-track dream teams — Rick Ross, Jay Z, Bon Iver and one relative newcomer, Nicki Minaj — for his single “Monster.” Not only did she best three iconic rap legends, her guest verse on “Monster” remains indisputably one of the greatest guest features of all time.

And on that verse, she warned us: “You could be the king but watch the queen conquer.”