Perhaps the most interesting aspect of a new American Research Group poll of Michigan, which gives Rick Santorum a six-point lead over Mitt Romney, a native son, is the stark divide it shows in the level of voter commitment to the candidates.

Ordinarily, a candidate should benefit from having the support of more definite voters — and most polling firms give them the bulk of the weight in their turnout models, which is why Mr. Santorum leads the poll over all.

The universe of indefinite voters is broader. But those votes don’t count for anything unless the candidate can get the voters to the polls.

That’s something Mr. Romney has had trouble doing so far. In states and counties that would appear to be strong for him, turnout is generally running below its 2008 pace. But in his weaker areas — say, most of the state of South Carolina — it has been steady or has improved some.

The discrepancy may help explain why Mr. Santorum has a larger lead, 15 points, in another poll of Michigan from Public Policy Polling. That firm projects Michigan’s electorate to be decidedly more conservative than it was in 2008. For instance, it projects 48 percent of the voters to be evangelical Christians, up from 39 percent in 2008, and 38 percent of voters to be “very conservative,” up from 24 percent.

One can debate whether these are realistic assumptions or not. The Republican electorate as a whole has become somewhat more conservative than in 2008, but the poll is projecting a more decisive shift.

Automated polling firms, like Public Policy Polling, often have low response rates, meaning that they tend to poll only the most enthusiastic supporters. At the same time, turnout in primaries and caucuses is normally quite low — so if a poll’s sample is biased in the direction of more enthusiastic voters, it may nevertheless have strong predictive power.

So far, in fact, Public Policy Polling (like most other polling firms) has underestimated Mr. Santorum’s performance. In the eight states that the firm polled immediately prior to the voting, Mr. Santorum had an average of 22 percent in the surveys — but he got an average of 27 percent of the vote. 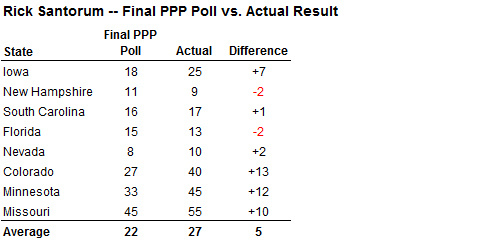 If the supporters of Mr. Santorum are more enthusiastic, Mr. Romney ought to have a way to counteract that. He is by far the best-funded candidate, and should have the wherewithal to build the best turnout operation.

It is not clear, however, how much emphasis Mr. Romney has placed on this part of his campaign. When I visited the various campaign headquarters in New Hampshire, Mr. Romney’s office was the busiest and the best run (although Ron Paul’s was reasonably close). Still, Mr. Romney’s office in Manchester was the only one he had in the state. In contrast, Barack Obama, Hillary Rodham Clinton and John Edwards each had 16 field offices in New Hampshire in advance of the 2008 primaries there.

And if one field office can keep you covered in a state like New Hampshire, where pretty much everything is within a 90-minute drive of Manchester, the same does not hold true in a larger state like Michigan (Mr. Romney’s Web site lists only one campaign office in the state).

So far, Mr. Romney’s campaign has relied more on the “air war” — television advertising. In Florida, where he came from behind to beat Newt Gingrich, he ran far more advertisements than the other candidates.

Almost all of these ads were negative, however, and almost all of them targeted Mr. Gingrich. There are two risks to Mr. Romney if he adopts a similar strategy in Michigan.

First, Mr. Santorum might prove more resilient to the attacks. Mr. Romney will need to develop a more creative line than the one he has used so far, calling Mr. Santorum a “career politician.” That line may produce diminishing returns, since Mr. Romney has leveled a similar charge against opponents like Newt Gingrich and Rick Perry in the past, and since it is slightly discordant coming from someone who has spent most of the past six years running for president.

The bigger problem, however, is that negative ads are no way to increase your base; instead, they may alienate key constituencies within the party.

That could be especially important to Mr. Romney because the window of voting through Super Tuesday might represent the last chance for him to win the nomination by consensus, with voters coalescing around him. To date, they have rejected several opportunities to do so, and the evidence probably weighs against their doing so now, but a decisive set of victories in different parts of the country would allow Mr. Romney to make a credible pitch to voters and party elites.

If, however, Mr. Romney gets only narrow wins in states like Michigan and Arizona after a negatively charged campaign, he would probably be the favorite to win the nomination, but a lot of those winning scenarios would be ugly ones, including an outside chance at a deadlocked convention.

Moreover, such a strategy could make Mr. Romney less resilient if he did tolerably well on Feb. 28 and on Super Tuesday but stumbled later.

Already, Mr. Romney’s unfavorable ratings are reaching dangerously high levels among both Republican and general election voters. If Mr. Romney is viewed unfavorably by the majority of Republicans, the party could be harmed in November even if he is the nominee — through diminished turnout or (less likely) the rise of a conservative challenger who would run as a third party.

A more positively themed campaign would obviously not guarantee a win in Michigan. (The FiveThirtyEight forecast model, following the polls, instead sees Mr. Santorum as the favorite there, although it has sometimes overreacted to temporary shifts in momentum.) But such a strategy is likely to be more sustainable for Mr. Romney, win or lose. It would be best if supplemented by a strong ground game; if it is too late for Mr. Romney to build one on the scale Mr. Obama or Mrs. Clinton had in 2008, he could at least increase the number of personal appearances he makes in each state.

Mr. Romney may also benefit if Mr. Santorum’s numbers fall back down to earth on their own, something that has happened to several candidates after previous bursts of momentum.

However, it is not necessarily obvious that the equilibrium state of the Republican race is one in which Mr. Romney wins, or at least not one in which he wins easily. The only time that he has has a pronounced lead in national polls in either 2011 or 2012 is after surges of his own following his wins in New Hampshire and Florida. But those, too, proved to be short-lived. If Mr. Romney is unable to find his base voters in Michigan — and get them to the polls — it becomes harder to see how he finds the building blocks for a national majority.