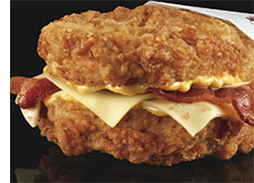 KFC’s Double Down Sandwich, an in-your-face collection of bacon, cheese and something called Colonel’s Sauce betwixt two fried chicken “buns”, is making waves for its unapologetic gluttony, compelling reviews out of everyone from the New York Times’s Sam Sifton to the Onion’s Nathan Rabin. But is it really the caloric monstrosity that it appears?

To get this out of the way: I haven’t eaten a Double Down. I probably will. And I’ll probably like it. But there are so many much tastier ways to clog your arteries here in New York that it’s not high on the priority list.

So instead, let’s start with the Double Down’s calorie count: 540 calories for the crispy “Original Recipe” version and 460 for a grilled variant. Those seem like big numbers, but by fast food standards, they’re pretty mild: the Burger King Chicken Tendercrisp weighs in at 800 calories, for instance, and Jack-in-the-Box’s Ranch Chicken Club will set you back 700. Calorie counts for burgers are even higher: 1,320 for a Hardee’s Monster Thickburger, and 1,350 for a Wendy’s Triple Baconator. Even the humble Big Mac, a lightweight by modern standards, contains 540 calories, exactly the same number as the Double Down.

But calorie counts are overrated. We all need to eat, to the tune of about 2,000 calories per day for a healthy adult. It’s not the calories so much as what you do with them. Are you getting a lot of fat, cholesterol, and sodium (bad)? Or lots of fiber and vitamins instead?

Here, the Double Down’s credentials are more impressive. Those 540 calories contain 145 milligrams of cholesterol (more than twice that of the Big Mac and about half of the USDA’s daily allowance) — along with 1,380 milligrams of sodium (the USDA recommends no more than 2,400 per day) and 32 grams of fat (65 will keep you slim, says the government). So, for getting only about one-quarter of the calories that you need in a day, you’re exhausting about half your budget of “bad stuff”.

We can, of course, be a bit more exacting about this. I’ve created an index based on the amount of fat, sodium and cholesterol that the Double Down and a variety of comparable sandwiches contain as a portion of the USDA daily allowance. (In the fat category, saturated fats are counted double and trans-fats are counted triple.) The index is scaled such that the Original Recipe version of the sandwich receives a score of 1.00, a measure of gluttony that will hereafter be known as The Double Down (DD).**

By this measure, the Double Down is indeed quite unhealthy, but some other sandwiches are just as bad. The Burger King Chicken Tendercrisp (1.00 DDs), which has less cholesterol but more fat and sodium, is comparably unhealthy to the Double Down on balance. The chicken ranch sandwiches from Sonic (0.94 DDs) and Jack-in-the-Box (0.98 DDs) are close. And surprisingly, some sandwiches from “fast casual” restaurants that have a reputation for healthy food do even worse. Panera’s Chipotle Chicken checks in at 1.49 DD’s — it has almost 50 percent more bad stuff than the Double Down — and Boston Market’s Chicken Carver at 1.14. So do some products that stretch the definition of “sandwich”. A chicken burrito from Chipotle with rice, black beans, cheese and corn salsa will cost you 1.16 Double Downs: load it up with sour cream, guacamole, and picante salsa as well and you’re up to 1.69. A pack of five McDonald’s Chicken Selects with a side of ranch sauce is worth 1.23 Double Downs. 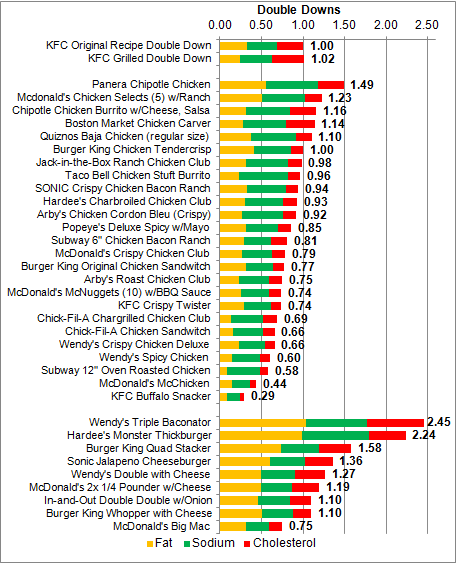 But it’s the burgers that dominate this category, with Wendy’s Triple Baconator (2.45 DDs) and Hardee’s Moster Thickburger (2.24 DDs) in a league of their own and more than twice as bad-for-you as the Double Down. Even an ordinary Whopper with Cheese (1.10 DDs) is slightly worse than the Double Down.

All of those products, however, contain more — often substantially more — calories than does the Double Down. They have lots (and lots and lots) of bad stuff, but some good stuff like protein, iron and fiber as well. Their calories aren’t quite so empty, and they damned well ought to leave you full.

So suppose instead that we re-calibrate our metric by dividing by the number of calories that each sandwich contains. This alternate measure, which we’ll call Double Downs per Calorie (DDPC), gets at the idea of how bad each product is for you on a bite-by-bite basis. 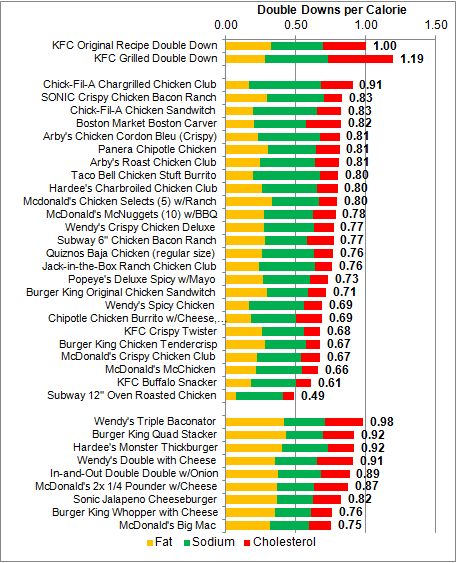 And here, things don’t look very good at all for the Double Down, since for all that crap you’re taking in, you’re only getting about one-quarter of the calories that you need. On this basis, not only is the Double Down worse for you than any of the chicken products (Chick-Fil-A’s Chargrilled Chicken Club, at 0.91 DDPCs, is the next-worst), but also all of the burgers as well — even the Triple Baconator (0.98 DDPCs) and the infamous Thickburger (0.92 DDPCs). In fact, the only thing that beats than the Original Recipe Double Down is the supposedly healthier grilled Double Down (1.19 DDPCs), which is almost 20 percent worse for you than the signature version on a per-calorie basis.

Things would look even worse for the Double Down if we also punished it for its lack of fiber (the original recipe version has just 1 gram and the grilled version has none) and other nutrients. But fast food restaurants are inconsistent about publishing this information, so it’s getting a break.

So, is the Double Down the most gluttonous fast food sandwich ever created? It depends on how you measure it. At the margins, consuming one Double Down almost certainly isn’t as bad for you as a Triple Baconator, a Thickburger, or even a fully-loaded Chipotle burrito. But while those products should, in theory, fill you up for at least half the day, the Double Down might leave you hankering for seconds. It’s a high bar to clear, but it’s the closest thing to pure junk food of any “sandwich” being marketed today.

To calculate Double Downs per Calorie (DDPC), take the above result, divide by the number of calories, and multiply by 540.