Based on a perusal of the vitamin section of most drug stores, you’d think Americans need a lot of vitamins. And almost 50 percent of adult Americans reported taking some dietary supplement, according to the most recently published data in the 2009-2010 National Health and Nutrition Examination Survey (NHANES). People take specific vitamin supplements, of course — B, C, D, E and so on — and if taking one vitamin at a time is too much, one-a-day multivitamins abound, designed for each specific life circumstance. (Are you an active man over 50? Support your cell health with extra selenium!)

Many medical studies show positive health effects from higher vitamin levels. The only problem? These studies often can’t tease out the effect of the vitamins from the effect of other factors, such as generally healthy living. Studies that attempt to do this typically show no impact from vitamin use — or only a very tiny one on a small subset of people. The truth is that for most people, vitamin supplementation is simply a waste of time.

To get a little more concrete — and to understand how we got to that endless row of vitamins at CVS — it’s useful to look at a couple of examples: vitamin D and vitamin E. These are among the most popular vitamin supplements: In the 2009-2010 NHANES, 34 percent of adults reported taking vitamin D supplements and 30 percent reported taking vitamin E.

One can find plenty of support for this supplementation behavior in the medical literature. A recent review identified 290 observational studies on vitamin D. For the most part, these studies measure the amount of 25-hydroxy vitamin D — the marker of vitamin D concentration — in participants’ blood and analyze the relationship between that concentration and various measures of health.

A bit less magical, vitamin E has also been credited (again, in observational studies) with everything from better pregnancy outcomes to lower mortality. In the most striking result, a large study published in the early 1990s found a 40 percent reduction in mortality risk from taking vitamin E supplements for two years. This effect is enormous.

But as striking as these results on both vitamin D and vitamin E are, they fall short of the standard for causality. These studies were not randomized controlled trials, which means other factors could have influenced their outcomes. The authors did try to adjust for some variables — age and whether the subjects smoke, for example — but these may not be sufficient. Yet people believe the results: 25 percent of adults reported taking vitamin E in 1989, and the share rose to almost 40 percent by 2003.

As is often the case, striking observational results like these were followed by large randomized controlled trials — many of them. A study run through the National Institutes of Health called the Women’s Health Initiative analyzed the impact of vitamin D and calcium supplementation in 36,000 post-menopausal women. Another large trial out of Harvard — the Physician’s Health Study — looked into vitamin E supplementation among 14,000 male physicians.

In these trials, participants were randomly assigned to take supplements. Because the assignment was random — and the trials were big — the demographic and health characteristics of the supplement group and the non-supplement group were similar before the study started. When researchers looked at participants’ health over the long term, they could therefore be confident that any differences they saw across groups were due to the supplements, and not some other factor.

When the results of these studies came out, they largely refuted the idea that these supplements offered benefits. Vitamin E appears to have no impact on cancer or heart disease. Results from the Women’s Health Study, released in 2005, showed no relationship between vitamin E supplementation and overall mortality. Later results from the men in the Physicians’ Health Study showed the same: no relationship.

For vitamin D, the randomized trials (nicely summarized here) refuted virtually all of the purported benefits to diabetes, weight loss and cancer. For elderly women, there is some evidence of a small reduction in mortality with supplementation, but well below what was seen in observational data and only marginally statistically significant.

The bottom line is that there is simply very little evidence that these supplements matter. The best-case scenario is if you are an elderly woman who is deficient in vitamin D — then a supplement might help a little. Still, in the 2009-2010 NHANES, about 30 percent of the non-elderly-female population took supplements.

And it’s not just vitamins D and E. The Physicians’ Health Study also looked into vitamin C and a one-a-day multivitamin and found the same results: no impacts on the risk of cancer mortality or the incidence of cardiovascular disease. Of course there are exceptions — folic acid is generally a good idea for pregnant women — but the data increasingly suggests that most people simply do not benefit from supplements.

One glaring issue is whether people who take vitamins are different from those who do not, and whether those differences also relate to differences in health. To give a sense of just how closely the patterns line up, the chart below shows the relationship between education and taking vitamin D supplements (in the 2009-2010 NHANES), and also the relationship between education and whether the individual is overweight or has diabetes. The chart also shows the same thing for race. 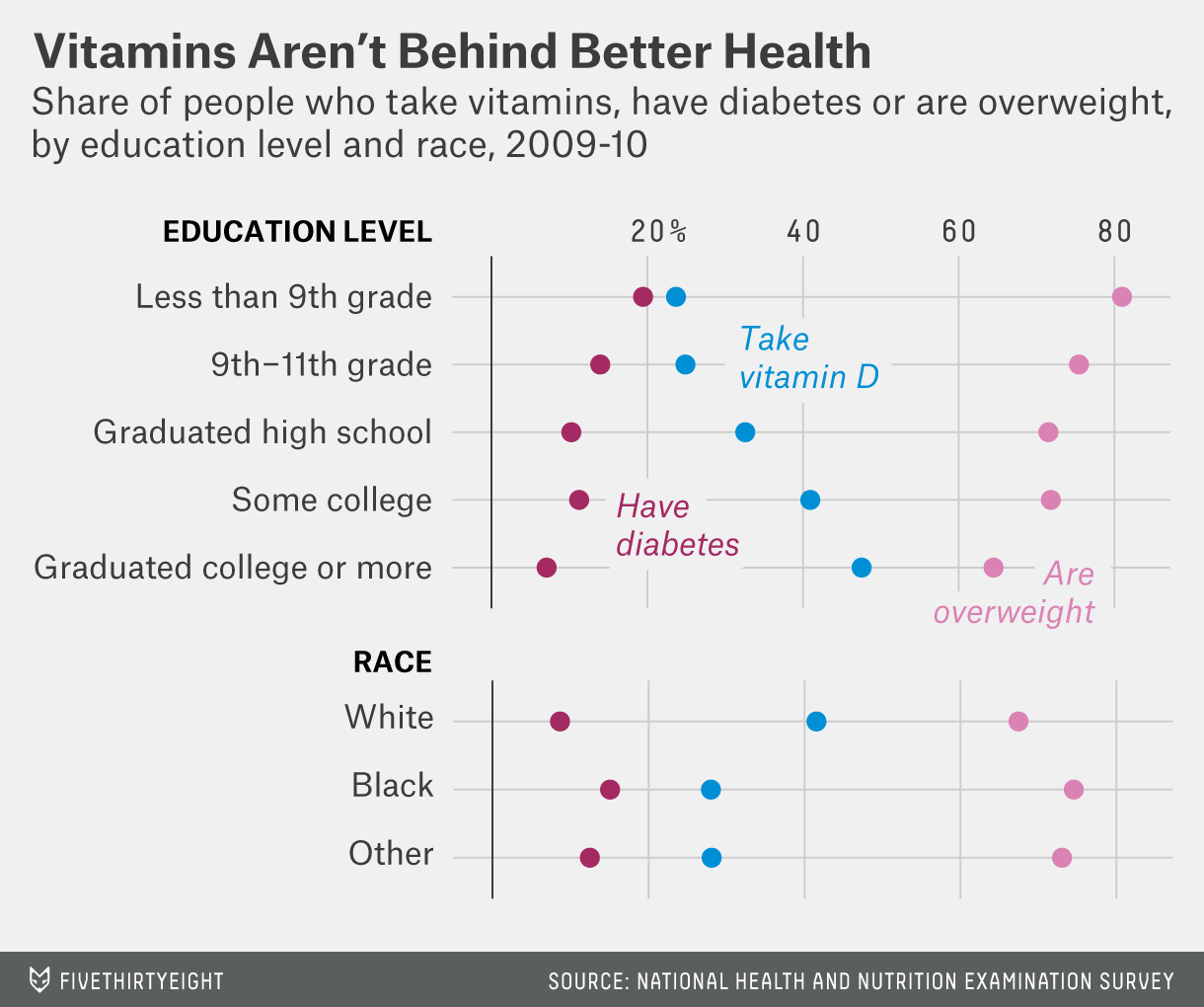 Both education and race link very closely with taking vitamin supplements, but they also link very closely with obesity and diabetes. For example, highly educated people are more likely to take vitamins but less likely to be overweight and have diabetes — and being overweight and having diabetes are associated with a host of health problems. This makes it virtually impossible to separate the impact of vitamins from the impact of these other variables. We know education and race are also very strongly linked to mortality rates. Given this backdrop, it is an almost insurmountable challenge to tease out any small impacts of vitamins.

It is therefore not surprising that when randomized data comes along, the results are very different. And of course this should lead us to be equally cautious when the next new, non-randomized study arrives to tell us what we should — or should not — add to our diets.