The last time a Steven Spielberg franchise was rebooted, we were treated to Indiana Jones fighting aliens. I am really, really worried about “Jurassic World,” which comes out today.

I have — so far — had the luxury of not having any of my favorite franchises hit by a catastrophic reboot. I never fell into the “Phantom Menace”-induced “George Lucas ruined my childhood” Sarlacc-pit-of-despair because the film — which came out in 1999 — was released during my actual childhood.1 I didn’t grow up on “Terminator” movies, so I never considered “Terminator Salvation” a gut punch. I hadn’t even seen the Christopher Reeve “Superman” films before the shlock that was 2006’s “Superman Returns,” and while the “Star Trek” reboot in 2009 may have initially ruffled some Trekkie feathers, I love that movie to no end.

But even if “Jurassic World” is amazing, I’ll have plenty more opportunities to be disappointed. Franchises are king. This trend has been slow to come, but it’s now ossified. As Grantland’s Mark Harris wrote late last year:

Sequels are now almost inexorable.2 Which, all complaining aside, is smart business. If you have a brand that people like, they may like more of it. Between now and Labor Day, we’re due for “Jurassic World,” “Ted 2,” “Terminator Genisys,” “Magic Mike XXL,” “Minions,” “Ant-Man,” and “Fantastic Four,” with nine more sequels by Christmas.

Yet, from a critical standpoint, franchises have diminishing returns — the average sequel ever so slightly diminishes the luster of each franchise, and there’s not a lot you can do to avoid that. As I’ll show in a moment, that’s a quantifiable fact. I was obsessed with “Jurassic Park.”3 I really liked “The Lost World.” I even enjoyed “Jurassic Park III” despite its myriad faults. Now, with “Jurassic World,” I need to find a way to let myself enjoy sequels and reboots. If every time I see a film and think “that wasn’t as good as the original,” it will become very hard to enjoy movies.

I pulled a list of franchises with three or more installments that made at least $1 billion combined worldwide, according to The-Numbers.com. That’s 40 franchises, everything from James Bond to Terminator to the Alvin and the Chipmunks Cinematic Universe,4 and 214 total films. These films go as far back as the 1960s, with the Bond films and “Planet of the Apes” franchise, but about 90 percent came out after 1980 and about two-thirds after 2000. I then pulled all the films’ Tomatometer ratings from Rotten Tomatoes. (Check out the list of franchises in the footnotes.5)

Every franchise has a least element. Math guarantees that. Even a really good series has an entry that is at least slightly less good.

So which film tanked a franchise the hardest? Sorry, “Star Wars” fanboys, but “Phantom Menace” isn’t anywhere near the worst. I took the average Rotten Tomatoes score for every franchise we have. I then calculated the average score for the franchise as a whole if each film had never been made.

Here are the biggest drags on franchises’ reputations: 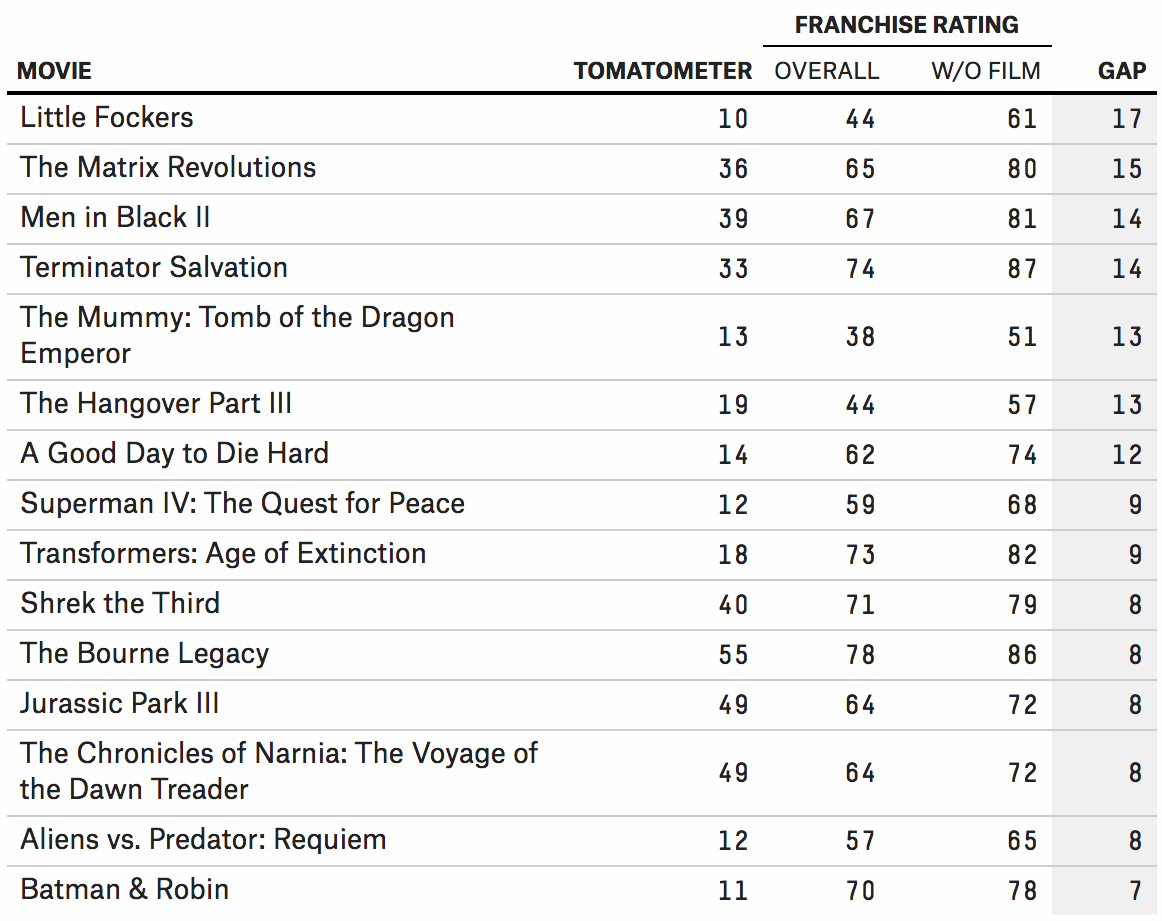 So the movie that dragged a franchise down the hardest was “Little Fockers,” which has an abysmal 10 on the Tomatometer. If “Jurassic World” gets a Tomatometer score of 33 or lower, it will drag its franchise’s average down enough to be in the top 10 worst sequels ever.

Still, that’s a static and retrospective analysis. The defining element of an ideal franchise is that it does not end. We judge the performance of films not once all is said and done but as it happens. For instance, even though both “Phantom Menace” and “Attack of the Clones” sucked, people don’t hate the latter film as much as “Phantom Menace” because the first prequel came out with sky-high expectations of quality and “Clones” did not.

What we’re really looking for is a way to quantify satisfaction and disappointment.

More often than not, sequels are not as highly rated as the first films in a series. 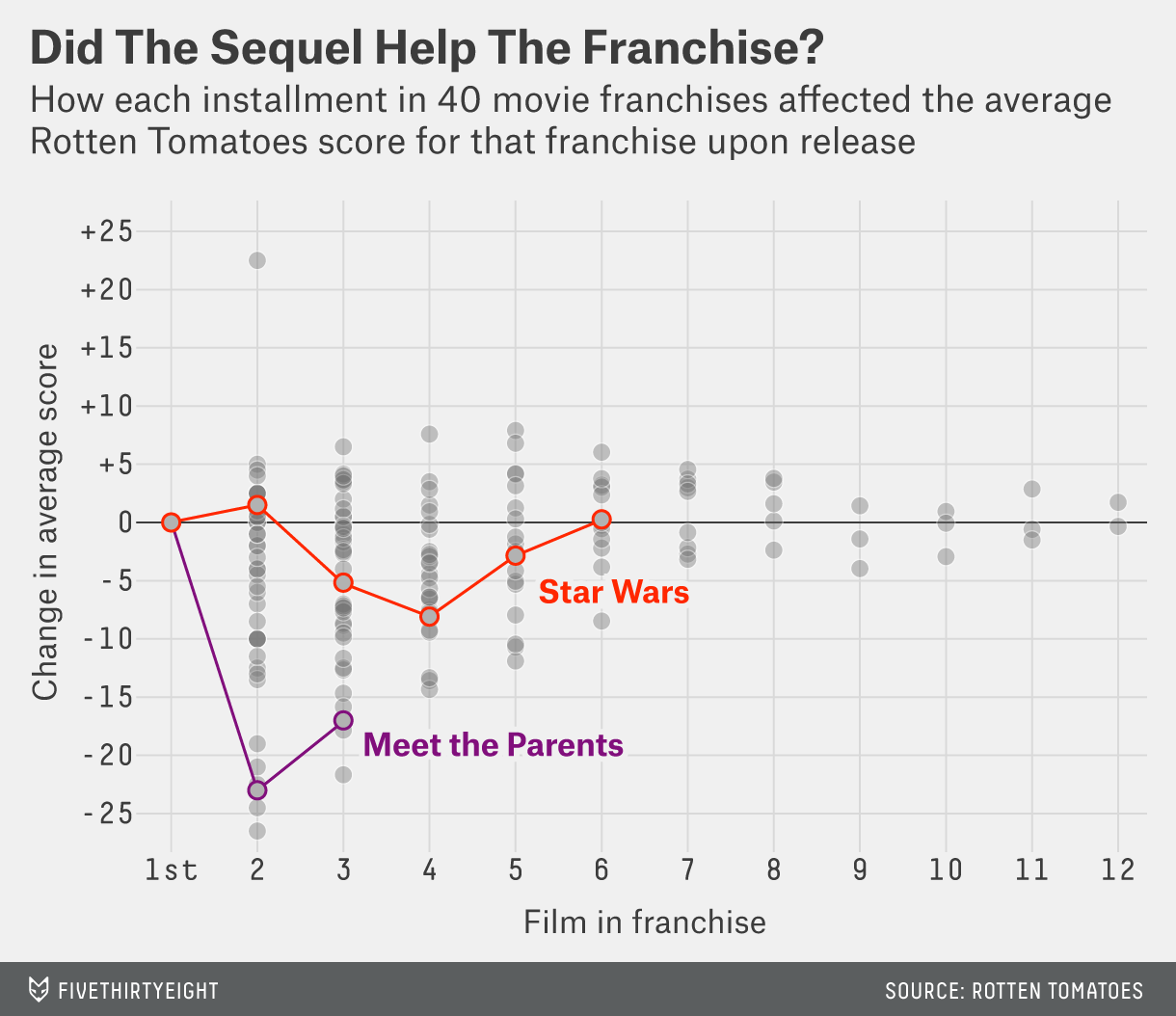 Indeed, the average sequel satisfaction value was -3.2, which means the average follow-up film made the overall franchise score drop 3.2 points.7

If “Jurassic World” comes out with a Tomatometer rating of 51, it’ll drop the overall franchise rating by 3.3 points and will be a standard franchise sequel.

“Men in Black II” heralded the biggest drop in franchise quality, followed by 1970’s “Beneath The Planet of the Apes” and then “Meet the Fockers,” “The Hangover Part II” and “Superman III.” These films might not have been the worst in the franchise, but they presaged the largest dips in quality and were often harbingers of worse things to come.

So franchises typically get worse over time, but a film sometimes resurrects or improves a franchise. When a sequel bucks against the gravity of franchise deterioration, that’s really something special. It’s an exclusive club: Just 40 of 174 sequels or follow-up films have a higher rating than the very first film in their franchise, and nine of those 40 are “Star Trek” movies, as “Star Trek: The Motion Picture” really, really sucked. Only 12 out of 40 of the films that were second in the franchise were rated higher than their predecessors, and the third film in a franchise was better than the first one only 20 percent of the time.

Here are the top 10 films that improved their franchise’s rolling average the most:

These are the films that dragged up the quality of their franchises as we saw them, essentially.

So here are the stakes for “Jurassic World.” It needs to hit a 93 rating to match or beat “Jurassic Park.” I bet my shirt it won’t. But if the film gets a 65 or higher rating on the Tomatometer, it will have a positive satisfaction score, likely satisfying fans who are familiar with the whole franchise. If it gets a Tomatometer score of 82 or higher, it will knock off “Superman Returns”8 to be one of the 10 best-ever sequels based on this set. Since scores tend to fluctuate until the end of the weekend, we’ll know Monday where “Jurassic World” fits in the realm of sequels, successful or otherwise.