The owner of California Chrome, which failed in his Triple Crown quest Saturday at the Belmont Stakes, had some controversial things to say about how it’s “not fair” that a lot of Chrome’s Belmont competitors didn’t run in the Kentucky Derby and/or the Preakness Stakes.

But California Chrome’s loss should surprise no one. This is the new normal.

California Chrome is now the 13th horse to have won the first two races but failed to win the Belmont since Affirmed won the Triple Crown in 1978. Of the 13, one was scratched the day of the race, and eight lost to horses that didn’t even run in the Preakness.

Having a number of “fresh” horses in the Belmont field was common in the era leading up to Affirmed’s Triple Crown, though perhaps a little less so. But the extent that these horses have been dominating in the Belmont is just one aspect of a bigger issue.

The main thing that separates the Belmont from the other two races is its length: At 1.5 miles (or 2.4 kilometers, or 12 furlongs), it’s over a quarter-mile longer than either the Derby or the Preakness. This distance has become increasingly rare in American horse-racing over time, to the point where almost all horses entering the Belmont these days have never raced it. Even highly experienced trainers may not have much experience with it. One trainer has come across Belmont’s extra distance only one in every 1,000 races.

Belmont is billed as the “Test of the Champion” — kind of like a final exam for a horse to prove itself the most worthy — but in reality it’s more like a test of a deliberately different skill set: i.e., 1.5 miles is to 1.25 miles as the SAT Math section is to the SAT Verbal.

For at least a half-century after the distances were settled, the three legs of the Triple Crown seemed about equally likely to be won by a horse that would (or did) win one of the others. But since 1979, the short track/long track divide has become huge, and the 13 failed Triple Crown attempts are just part of the story.

We can compare those rates to the Belmont odds for horses that won neither the Derby nor the Preakness. This is a little difficult, because field sizes vary and often have a number of serious long-shots in them, so I’ve made this comparison based on an assumed pool of six “competitive” horses per race. Thus we can see how a horse’s performance in the precursors has affected its chances of winning the Belmont: 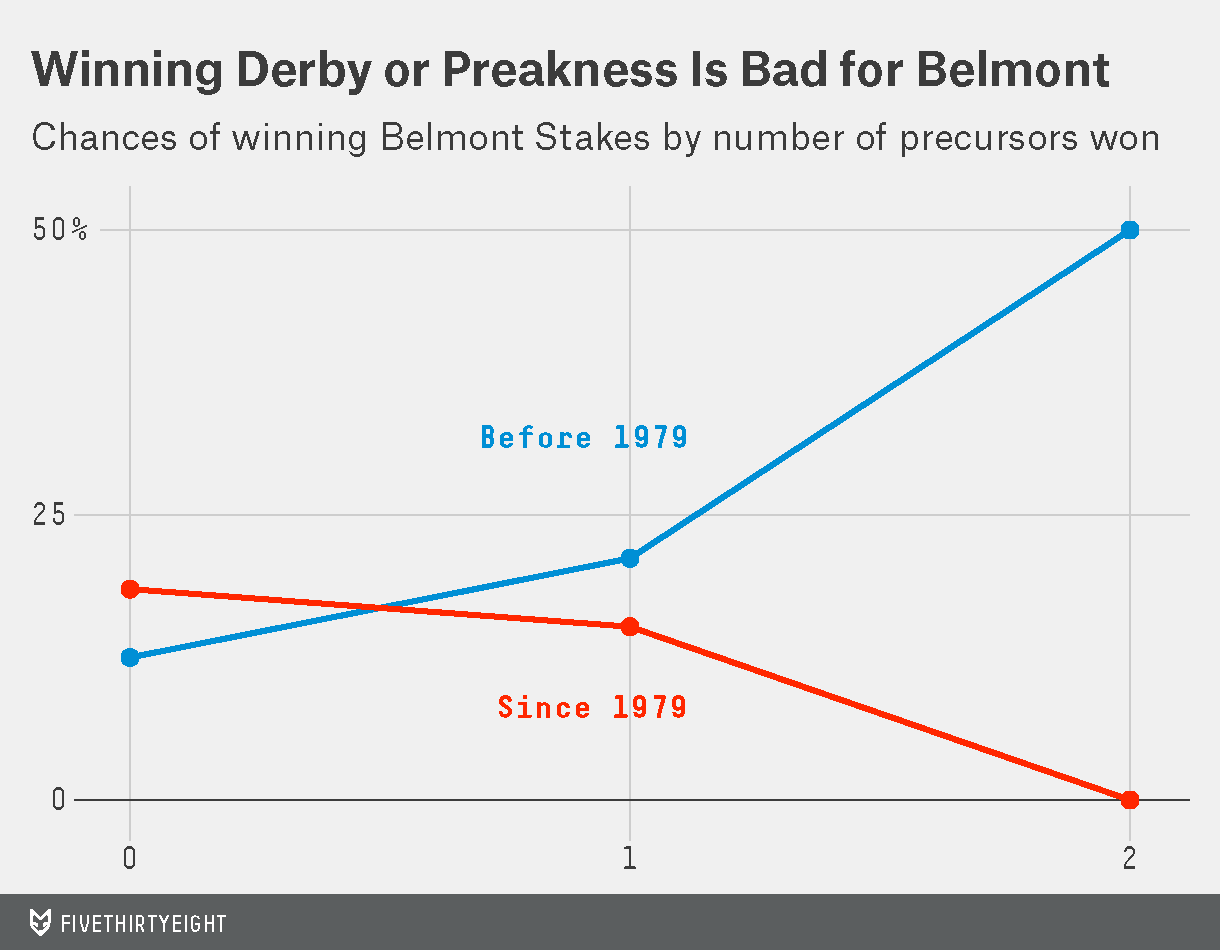 As you can see, the odds drop significantly for horses with one win on the shorter tracks going in, and completely for horses with two wins. As a natural result, the odds of winning the Belmont for a horse with zero wins in the previous two races have grown — to the point where they may (amazingly) even be higher than for a horse with a winning track record. Thus, each marginal precursor win has actually decreased a horse’s chances of winning the Belmont (note that racebooks have completely failed to capture this effect).

Perhaps this is partly because winning precursor races places horses at a disadvantage to fresher horses (as California Chrome’s co-owner Steve Coburn seems to think). But, more importantly, winning the shorter precursors is further evidence that a horse is more calibrated to the shorter distance.

That top horses are calibrated to shorter distances is also evidenced by the rate at which Derby and Preakness winners match each other: California Chrome was the ninth such horse in the past 18 years.