A Great Dane who was taken to an emergency animal hospital in February after consuming 43-and-a-half socks not only survived his ordeal, but has gone on to appear in Veterinary Practice News as one of the winners of the magazine’s annual X-ray contest. The Associated Press subsequently picked up on the story of the 3-year-old male from Portland, Oregon (who remained anonymous). 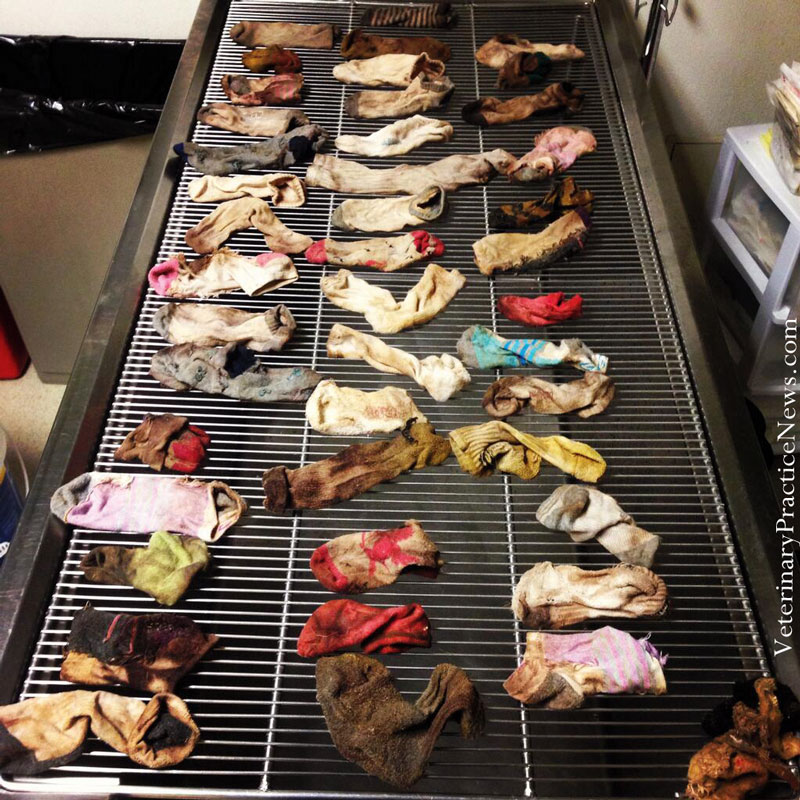 The technical term for the consequences of the Great Dane’s mistake is “foreign body gastrointestinal obstruction,” and it’s something that, according to a 2009 paper in the Journal of Small Animal Practice, is “commonly encountered.” Graham Hayes of the Queen’s Veterinary School Hospital at the University of Cambridge looked at 208 cases in both dogs and cats over two years to establish what objects the animals were swallowing and where those objects were ending up.

In total, Hayes recorded 199 foreign objects — including underwear and corncobs — that were retrieved from 183 dogs. 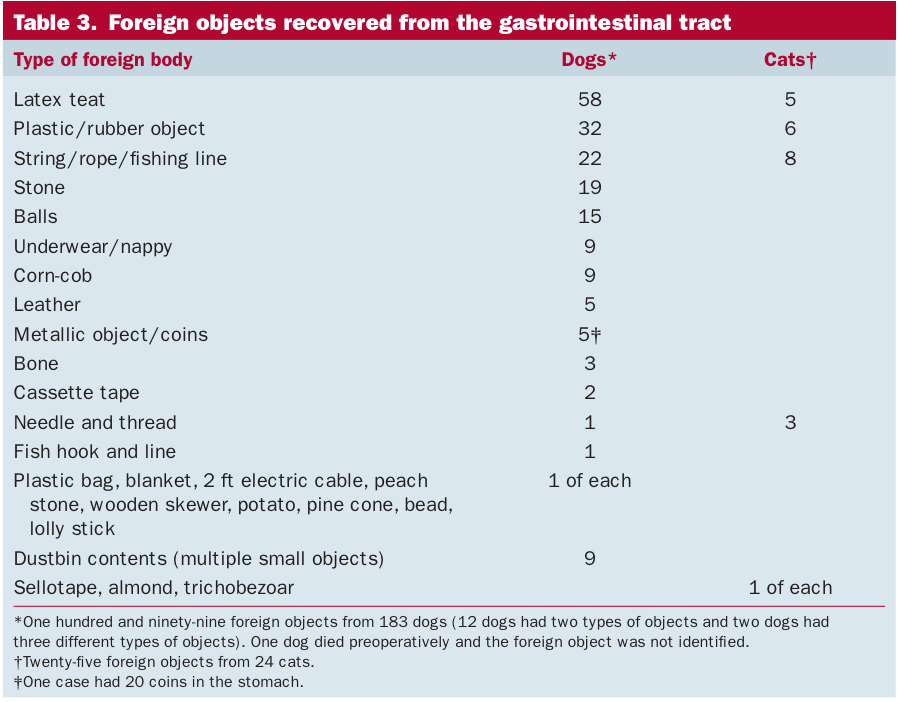 In just two cases did the animals pass the foreign objects in vomit or feces — most items got stuck somewhere between the mouth and the anus. In the diagram below, Hayes illustrated the percentage of objects found at each point in the digestive tract (numbers on the left describe dogs, those on the right are for cats) and the average number of days that the animals appeared to be sick. So, for example, 16 percent of dogs swallowed foreign objects that became lodged in the stomach, and the dogs showed clinical signs of the mishap after about 2.9 days. 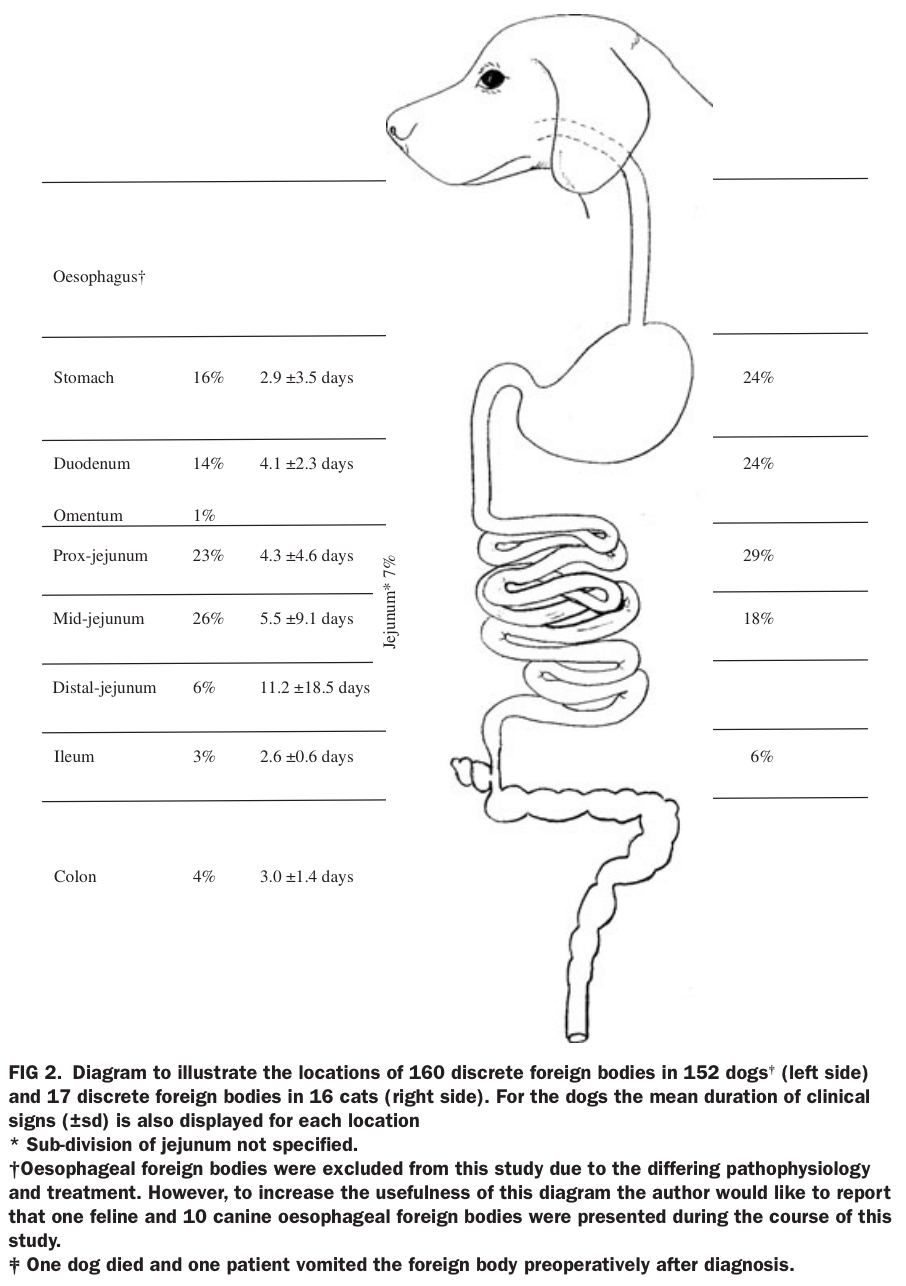 Only one of the dogs in the study was a Great Dane, so Hayes didn’t reach any conclusions about that specific breed’s risk appetite. But he did find that “five breeds were at significantly higher risk of requiring treatment for a gastrointestinal foreign body.” By comparing the number of incidents per breed to the overall presence of each breed in the entire hospital population, Hayes found that Staffordshire bull terriers, English bull terriers, Jack Russell terriers, border collies and springer spaniels were high-risk breeds.

The Great Dane with the great appetite for socks was, according to Veterinary Practice News, brought to the animal hospital after he “was observed repeatedly vomiting and retching all day.” Other entries in this year’s X-ray competition were spotted after the animals’ owners became concerned about their pets’ refusal to eat and took them to be examined.

According to Hayes, those pet owners are not alone. In his study, in only 14 cases did owners witness the animal’s ingestion of the foreign object, so most owners only became aware of any problem once their pet presented clinical signs such as vomiting (87 percent), anorexia (72 percent), body weight loss (8 percent) and diarrhea (5 percent).

Hayes’s research is just one study — there aren’t any national statistics on dogs and cats ingesting objects that they shouldn’t. But maybe dogs are dogs. A 2001 study of 123 cases in Croatia also found that dogs had consumed stones, rubber objects and corncobs. Another much older study based on 15 years’ worth of data on Japanese dogs also found that stones and corncobs were popular items.