A poll released on Monday by the Pew Research Center and The Washington Post found a partisan shift in the way Americans view the National Security Agency’s domestic surveillance programs. In the survey, slightly more Democrats than Republicans said they found it acceptable for the N.S.A. to track Americans’ phone records and e-mails if the goal is to prevent terrorism. By comparison, when Pew Research asked a similar question in 2006, Republicans were about twice as likely as Democrats to support the N.S.A.’s activities.

The poll is a reminder that many Americans do not hold especially firm views on some issues and instead may adapt them depending on which party controls the executive branch. When it comes to domestic surveillance, a considerable number of Democrats seem willing to support actions under President Obama that they deemed unacceptable under George W. Bush, while some Republicans have shifted in the opposite direction.

What may be just as significant is the way in which attitudes toward the security state could split voters and elected officials within each party — possibly creating a wedge issue in both party primaries in 2016. Politicians who are normally associated with being on the far left and the far right may find common cause with grass-roots voters in their objection to domestic surveillance programs, fighting against a party establishment that is inclined to support them.

Take, for example, the House’s vote in May 2011 to extend certain provisions of the Patriot Act — including the so-called library records provision that the government has used to defend the legality of sweeping searches of telephone and e-mail records. The bill passed with 250 yes votes in the House against 153 no votes, receiving more of its support from Republicans. (In the Senate, the bill passed, 72-23, winning majority support from both parties.) However, the House vote was not well described by a traditional left-right political spectrum.

The no votes are concentrated at the two ends of the spectrum. The 49 most liberal members of the House (all Democrats) who voted on the bill each voted against it. But so did 14 of the 21 Republicans deemed to be the most conservative by DW-Nominate.

Perhaps, you might object, a one-dimensional spectrum doesn’t do a very good job of capturing all the nuances of what it means to be liberal or conservative in America today. In considering the surveillance state, for example, Republicans must weigh their traditional support for aggressive antiterrorism policies against their distrust of government, while Democrats must weigh their trust of Mr. Obama, who so far has been unapologetic for the N.S.A.’s actions, against their concern about civil liberties violations.

Or more broadly, what about libertarians who take conservative views on economic policy but liberal views on social policy — or conservative Democrats who support the welfare state but not policies like gay marriage? Where are they represented on the spectrum?

I am sympathetic toward these objections as a theoretical matter. Without making this too much of an editorial comment, I find the platforms of both parties to be lacking in philosophical cohesion — why, for example, should views on abortion have much to do with preferences on tax policy?

But when it comes to American political parties and their representatives in Congress, partisanship tends to dominate all other considerations. National Journal has a different system for ranking members of Congress from liberal to conservative. It is somewhat less statistically rigorous than DW-Nominate’s system, but it does have the advantage of breaking votes down into three categories: those on economic, social and foreign policy.

The correlations between the three policy areas are very high (specifically, they are about 0.9, where 1 would represent a perfect correlation). Members of Congress who take conservative views on economic policy tend almost always to take conservative views on social policy and foreign policy as well, while members who are liberal on one set of issues tend to cast liberal votes on almost all other issues.

This does leave the question of how liberal and conservative policy stances are defined. (Support for gun rights, for example, is generally seen as socially conservative rather than socially liberal, even though socially liberal stances are often thought of as promoting the rights of individuals against communities or governments.) Nevertheless, for members of Congress today, a vote on any one issue is highly predictable based upon his votes on other issues. There are extremely few mavericks in Congress who vote on each issue on an independent and nonpartisan basis.

DW-Nominate uses a different method to classify Congressional votes. Instead of assigning a subjective definition to each vote as liberal or conservative, it instead uses an automated process called optimal classification. The goal of this process is essentially to explain the highest number of Congressional votes based on a one-dimensional scale, regardless of the content of the legislation that comprises it. Whichever votes are not well explained by this first dimension are then explained by additional dimensions.

The process is more intuitive than it might sound. For example, during the 1960s, Congressional votes on civil rights policy toward African-Americans were not very strongly correlated with votes on other types of political issues. (For instance, Southern Democrats were often staunchly opposed to civil rights for blacks while casting very liberal votes on the welfare state.) Thus, you needed at least two dimensions to describe Congressional voting patterns in a reasonably comprehensive way.

In recent years, however, this has been much less of a problem: the one-dimensional spectrum explains about 95 percent of Congressional voting, and votes on economic, social and foreign policy are highly correlated. But a few votes still fall outside of the spectrum — the 2011 vote on the Patriot Act among them.

If the second dimension no longer represents a distinction between economic and social policy, then what do
es it reflect? The authors of DW-Nominate are interpreting it to measure a distinction between what they call “establishment” members of Congress and “outsiders.” Here at FiveThirtyEight, I have sometimes used the same labels when describing the ideological space occupied by different candidates during the presidential primaries. Some candidates, like Mitt Romney, run as insider or establishment politicians, offering some iteration of what they say are tried-and-true solutions, while others run as insurgents or outsiders, submitting a more profound critique of politics as usual and claiming they will topple an unacceptable status quo.

In general, those politicians who rate as insurgents or outsiders are on the wings of the liberal-conservative scale. The Tea Party, Occupy Wall Street and Ron Paul movements probably all fit into the outsider or insurgent category, for example, even though they inhabit vastly different spaces on the traditional left-right political spectrum. 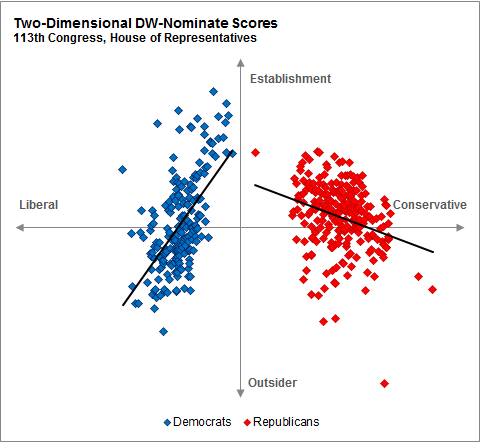 Conversely, moderates in both parties tend to score as establishment politicians. There aren’t very many “radical centrist” members of Congress who offer a pronounced critique of the status quo while also coming down somewhere in the middle on most policy issues.

In the case of the Patriot Act vote, the establishment-outsider axis makes nearly as much difference as the liberal-conservative or Democratic-Republican scales. Among the so-called establishment members of the House who voted on the bill, 78 percent voted to extend the Patriot Act, while only 41 percent of the so-called outsiders did, according to DW-Nominate’s classifications. 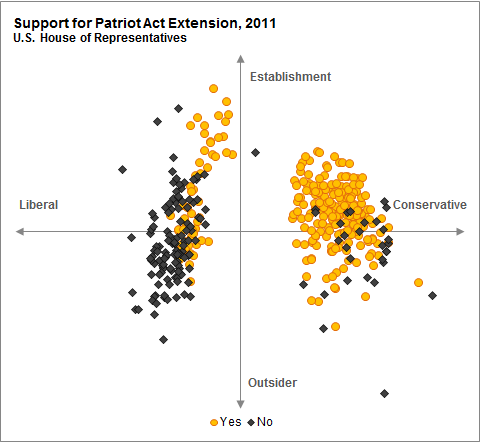 You can find similar patterns in certain votes on policy toward the financial sector — for example, during the various bailout votes that were cast toward the end of 2008. More recently, votes on the federal debt ceiling have taken on some of the same contours.

What is the link between the financial votes and those on the surveillance state? In both cases, members of Congress were asked to trust the assertions of elites that significant harms would result if the bills were not enacted: terrorist acts in the event that the Patriot Act was not extended, or financial calamity in the event that the bailout was not passed or the debt ceiling was not raised.

As a matter of practice (but not necessarily theory), convincing someone that a future crisis must be averted requires a higher level of persuasion than making the case for a policy that is claimed to ameliorate some extant problem. Members of Congress who are members of their party establishments might be more inclined to trust testimony from financial or national security elites, and therefore might have been easier to pitch on these bills.

We should be careful about extrapolating the voting behavior of Congress to policy views among the general public. But as I have suggested, the establishment-outsider divide can loom large in presidential primaries. Particularly within the Republican Party, rank-and-file voters have increasingly lukewarm views of the party leadership. But Democrats will also face a primary after Mr. Obama’s tenure in office. Highly liberal, activist voters who might ordinarily be inclined to critique the status quo could face some awkward questions given that the status quo has featured a Democratic president.

Debates on domestic surveillance could serve as proxy battles for these intraparty factions. Senator Rand Paul of Kentucky, perhaps along with other Republican candidates, could use his opposition to surveillance programs to help consolidate the support of libertarian and Tea Party voters, at the risk of alienating national security conservatives. Democratic candidates who criticize the Patriot Act or the N.S.A.’s actions will be finding fault with policies that Mr. Obama has defended – and Mr. Obama will very likely remain quite popular among Democrats three years from now.

Precisely because public opinion on domestic surveillance policy is malleable (as evidenced by the Pew survey), it may come to take on symbolic power. How inclined will Democrats be to support policies that they might otherwise oppose because Mr. Obama pledges that the N.S.A. is using the information it collects appropriately? How much are Republicans willing to believe national security officials appointed by Mr. Obama — defending policies that were often first enacted under Mr. Bush?

How does someone in either party weigh the desire to prevent terrorist attacks against the image of a bureaucrat snooping through his in-box?

The phrase “trust in government” is often invoked in a political context, but its meaning is usually metaphorical, referring to how much a voter might prefer public-sector decisions to those that might be left to the private sector or to individuals. Here, it means something rather more literal: do you trust officials within the government to carry out their national security mission without abusing their powers? Do you trust them when they say that the trade-off between security and liberty is worthwhile — especially when many of the threats they claim to be preventing are based on classified information that you aren’t privy to?

In some ways, it may prove invigorating to have a political debate that does not break down all that neatly into the usual partisan camps. And because they create as many fractures across the parties as between them, the recent N.S.A. disclosures might not have all that much effect, for instance, on Mr. Obama’s approval ratings or the Congressional elections next year.

But there’s the possibility that surveillance policy could become a major issue in the 2016 primaries, as elites in each party defend themselves against rank-and-file voters who are critical of their judgment.