Is Mitt Romney’s position more advantageous than some polls imply?

That’s what Mark Blumenthal of The Huffington Post suggested in a column on Wednesday. He noted that many of the polls out now were conducted among registered voters. But when pollsters switch over to likely voter models, which account for their estimate of how likely each respondent in the survey is to vote, as the election draws closer, they may be expected to show slightly more favorable results for Mr. Romney, enough to potentially matter in a close election.

I mostly agree with Mr. Blumenthal. In fact, our forecast model builds in a “likely voter adjustment” — it is already shifting those registered voter polls a bit toward Mr. Romney.

But it would also be possible to overestimate how much difference this might make. In the past six presidential election years, the shift to likely voter models has always helped the Republican candidate, but the difference has also always been small, usually amounting to a net of one or two percentage points in the margin between the two candidates.

This is the optimal way to study this problem, in my view. The “house effects” that different polling firms exhibit can be substantial. Each cycle, some pollsters will have results that are consistently more favorable to either the Democratic or Republican candidate than the consensus of surveys, even before applying their likely voter adjustment. Often, these effects are fairly large — three percentage points in one direction or another, and occasionally more — so they can swamp any impact from the use of a likely voter model. These house effects could lead you to falsely attribute the differences to the use of a likely voter model when instead they have some other cause.

Unfortunately, polling firms are not always in the habit of releasing both registered voter and likely voter numbers in the same survey, even though this gives you a lot more of an idea about the assumptions behind the poll. (Perhaps a few polling firms would prefer that you not know how the sausage was made.) Moreover, in some cases where polling firms have released this data, it has been lost to the ages: polling databases sometimes preserve only the likely voter number.

Still, we have a reasonably robust database of polls that did print both sets of numbers. The database includes national and state surveys. The key is in how the two sets of numbers, the registered voter and likely voter results, compare with each other, rather than what they are in any absolute sense.

As you can see from the chart below, they tend to follow a pretty consistent pattern. Over the past six presidential election cycles, likely voter polls have been 0.7 points to 2.5 points more favorable to the Republican candidate than registered voter polls.

If you look at the four years in which our database has the most robust coverage (1992, 2000, 2004 and 2008), the band of outcomes has been even narrower. The likely voter models shifted the results to the Republican candidate by a net of 1.1 percentage points to 2.1 percentage points.

Why do Republicans have this advantage? Because, for many years, the demographic groups that have tended to vote Republican have also tended to have demographic characteristics — for instance, being older, whiter and wealthier — that correlate with having a higher propensity to vote.

At the same time, it is probably not realistic to expect large shifts in the numbers in presidential election years. In those years, 83 percent to 90 percent of Americans who say they are registered to vote claim to have actually voted. Those numbers may be a pinch high since voters can exaggerate their propensity to vote, as well as their propensity to be registered. But the actual figure is probably about 80 percent.

With these relatively strong participation rates, polling firms should generally not be removing all that many registered voters from their pool when they draw up their sample of likely voters, so the partisan advantage for one or another candidate isn’t likely to change all that much.

But the results have been pretty consistent in presidential election years: a shift of one or two points toward the Republican candidate has been typical.

The way our forecast model accounts for this is to default to applying a shift of 1.5 percentage points toward the Republican candidate whenever it encounters a registered voter poll.

This default estimate may change once we get a sufficient number of polls that present a direct comparison of likely and registered voter numbers. So far, we have not had very many of these surveys, so the model has not shifted very far from the default. (It is now giving Mr. Romney a 1.6-point push when it encounters a registered voter poll.)

But this may be putting the cart before the horse. Are pollsters actually successful at predicting who will vote and who won’t? Are the likely voter polls truly more accurate?

My research suggests that they generally are, but it isn’t a slam dunk. In measuring the difference between the actual popular vote margin between the Democratic and Republican candidates and the one implied by the poll, likely voter polls were more accurate in 1992, 1996, 2004 and 2008, while registered voter polls were a bit better in 1988 and 2000.

The advantage comes, however, from polls conducted late in the race. From about Labor Day onward, voters become more tuned in to the campaign, and it may become easier to discern how much their interest in the campaign will translate into their likelihood of voting.

As the next chart shows, likely voter polls have been about a full percentage point more accurate than registered voter polls when conducted from Sept. 1 until Election Day.

However, likely voter models have not been any more accurate before that date. In fact, they have been slightly less accurate than registered voter polls (although the sample size is small enough that I wouldn’t make much of that finding). 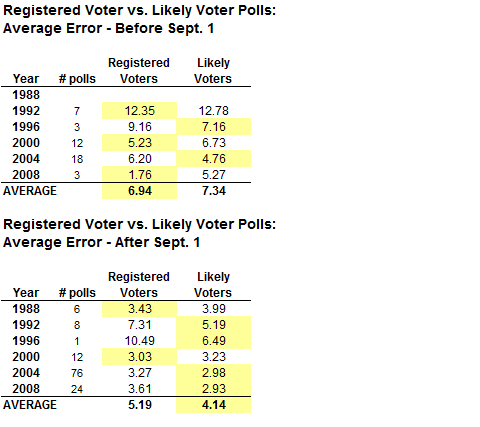 Many polling firms believe that likely voter models are unreliable when applied this early in the campaign, and most avoid doing so. This evidence suggests that this is a solid intuition: the things that get voters excited in July may not be the same ones that wind up doing so in November.

If you see likely voter models right now showing numbers that are not much in line with the historical pattern — say, those that produce a five-point shift toward Mr. Romney, or a two-point shift in favor of Mr. Obama — I wouldn’t necessarily pay a lot of attention to them.

However, the historical patterns have been quite consistent once the likely voter models become more reliable. Most likely, they will show a shift of somewhere in the neighborhood of one or two points toward the Republican candidate — in this case, Mr. Romney.

For the time being, our model is giving Mr. Romney credit for a 1.6-point shift when it sees a registered voter poll and has him just a tiny bit behind Mr. Obama despite this. Needless to say, if the gap comes in toward the higher end of the historical range — or at something higher still, like a three-point difference in his favor — Mr. Romney’s chances of winning the election will improve.