Do people order more-expensive food when they know they’re going to be splitting the check equally (e.g. three friends all give their credit cards for the waiter to split the tab)?

If anyone accuses you of being stingy for questioning whether to split the check, feel free to tell them you’re not the only one asking. Behavioral economists are interested in this problem, too — they even have a name for it: the unscrupulous diner’s dilemma. The research on this shows that most people secretly don’t want to divide the bill evenly. And for good reason.

In 2004, a study in The Economic Journal, a publication of the Royal Economic Society, looked at the behavior of Israeli students in different dining scenarios at a restaurant “with numerous delectable categories to encompass a wide range of tastes” (academic writing, eh?). The researchers told four groups of diners (always three men and three women) to split the bill equally among them. They told another four groups to pay for what they had ordered. Lastly, they told two lucky groups that they would get their meals for free.

The results were consistent with the economists’ hypotheses: Those who were getting a free meal spent the most (especially one cheeky person who, judging by this chart from the study, really went all out). Those who were splitting the bill spent less, and those who were paying individually spent the least — costs are in Israeli new shekels. 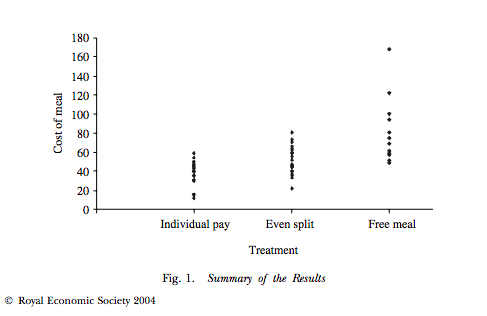 Which I guess is pretty interesting. But to me the more interesting question is why we all behave like greedy morons. Economists have a name for this concept, too: externalities. Any time you make a decision that affects someone else without considering how it might affect that person, whether positively or negatively, you create an externality — it’s basically a fancy way of saying “indirect effect.” There are positive externalities (e.g. when you decide to get a flu shot, other people benefit) and negative externalities (e.g. when you decide to fart, other people suffer).

The unscrupulous diner’s dilemma reveals how negative externalities — and even the mere threat of negative externalities — affect our behavior. Participants in the bill-splitting experiment expected the others to order more, so they tried to maximize what they could get out of the situation by ordering more themselves. This makes no sense because it increases the amount of money out of their own pocket — money they could save by ordering more frugally. And you see the irony of course, Bill: Believing others will act selfishly makes individuals act selfishly.

Even if you haven’t heard of a “negative externality” before, I bet you’re well aware they exist. I think most people know instinctively how other humans behave — 80 percent of the participants here said before the experiment started that they would prefer to pay individually. That’s partly because people know they might pay more if they split the check equally. But there are some nonfinancial costs that mean equally dividing the bill is a smart move: the mental arithmetic that would otherwise be required to figure out how much everyone owes (especially annoying with large parties). And the social cost of being the person to suggest that everyone pay for what they ordered (never popular, especially if the suggestion comes at the end of a meal when people have already ordered those extra side dishes). Culture determines those social costs, and it seems to have a powerful effect indeed.

But the experiment might not have reflected the effect of culture accurately. The study participants didn’t know one another — and they were told to place their orders without discussing or disclosing their choices with anyone at the table. I wonder if that may have magnified some of the outcomes here.

If the negative externalities of bill-splitting bother you, Bill, you have a couple of options. The researchers found that when people were told how to split the bill in a laboratory setting, they came closer to a “socially efficient” outcome. Basically, you can eliminate some of the social shame of not wanting to split the bill evenly by choosing a place like a fast-food restaurant where you can blame the institution for giving separate checks.

Alternatively, you can skip the country. According to Anand Damani, a consultant on behavior change, Germans tend to suggest paying individually, while in Israel, the U.S. and India it’s considered rude not to split the bill evenly. Us Brits tend to do “rounds,” where we simply take turns covering the whole check (a word of warning: the negative externalities go through the roof when someone doesn’t return your call to organize another meal).

Whatever you decide, I hope the numbers help,